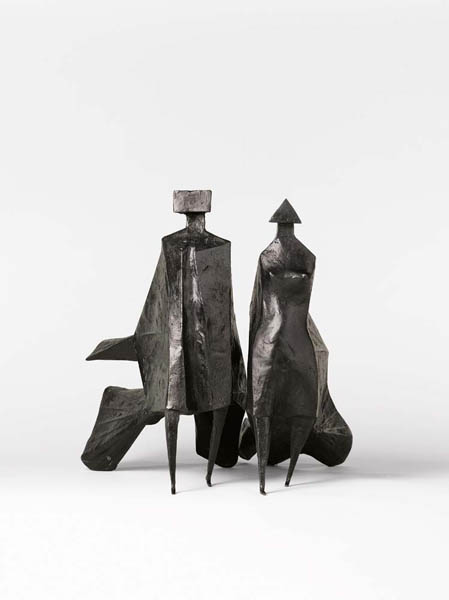 Sculptor Lynn Chadwick is regarded as one of the twentieth century’s most well-respected British artists – he was one of the outstanding sculptors of this time who combined great imagination with an immense technical ability. He is recognised for his distinctive style, his theme of organic, figurative or abstract forms juxtaposed in a series of angular shapes. His preferred media were metal, bronze and later, steel. In his obituary in The Guardian, Terence Mullaly wrote of Chadwick, ‘he produced objects eloquent of both the grandeur and the dilemma of man. They are highly idiosyncratic, yet their message is universal.’1

Lynn Russell Chadwick was born in 24 November 1914 in Barnes in London. Chadwick’s father was an engineer, and his mother had a passion for the arts, with the Scottish sculptor Thomas Clapperton (1879-1962) a member of her friendship circle. As a student at the Merchant Taylors School, London, geometry was a subject that engaged Chadwick, he also enjoyed languages and was a keen sportsman. Whilst at school, his early introduction to art came when he received instruction from an Associate of the Royal College of Art in the technique of watercolour painting. Some of these early works survive, and demonstrate that he had a good command of this medium.

Chadwick showed early interest in pursuing a career in art, but, faced with the economic depression in the 1930s, he chose architecture as a vocation, seeking a more stable income. He entered the offices of architects Donald Hamilton to work as an assistant draughtsman in 1933. His work included designing shop fronts and plans for buildings, which enabled him to develop a significant level of precision as required for structural design. He moved to other firms over the next few years, gaining a variety of skills in draughtsmanship.

1939 saw the beginning of the second World War and Chadwick chose to become a farm labourer to support the war effort at home, although he later joined the Fleet Air Arm of the Royal Navy, training as a pilot in 1941. Following demobilisation in 1944, Chadwick settled into the Chelsea area of London and returned to the architects’ offices of Rodney Thomas, a previous employer. Work for architects was focused mainly on reparation and particularly rehousing the displaced population following the destruction of buildings during the conflict. He began working on drawings for parts of the interiors of prefabricated homes; a type of dwelling designed to provide a fast, simple solution to the chronic housing shortage at the end of the war.

At this point, Chadwick began to fashion himself as a designer, with the aim of being free-lance. He entered and won a competition to design textiles for fashion designers Zika and Lida Ascher in 1946, whose other collaborations include textiles designed by artists such as Pablo Picasso (1881-1973), Henry Moore (1898-1986), Henri Matisse (1869-1954) and André Derain (1880-1954). The prize gave him the courage to produce more designs, and an entire notebook from 1946 survives. These motifs are spirit-like forms, painted using a bright, bold colour palette.

Chadwick saw himself as a ‘constructor’ rather than a carver or a modeller. He would build a skeletal frame on to which he would attach a skin, or surface, from metal. Patina, or surface colour, would be added later. This method is in contrast to the traditional process of creating a small model and scaling up. He rarely produced detailed sketches beforehand and preferred to work in a more immediate manner, improvising as the work unfolded. This essentially heuristic approach was central to Chadwick’s method of working.2 Many drawings were produced post-production, as a way of recording his work, and also to satisfy the demand from dealers and collectors.

Although he came to the profession relatively late in life, international recognition for his work came quickly. Following his first one man show at Gimpel Fils, the commissions increased, one for the Arts Council, another for the Contemporary Art Society in 1951, as well as requests for sculptures for restaurants being designed by both Russian-born British architect Mischa Black, and architect Jane Drew. A year later, the British Council invited him to contribute to a group show of British Sculptors at the Venice Biennale, which saw Chadwick exhibit four sculptures and four drawings. By 1956 he was invited to represent sculpture at the Venice Biennale where he beat Alberto Giacometti (1901–1966) to win the International Prize for Sculpture – a win which was a surprise to the artist and a significant accolade.

Chadwick died in 2003, during the final stages of planning an exhibition of his work at Tate Britain - a belated tribute to one of Britain’s greatest sculptors of the second half of the twentieth century.4 He was awarded Commander of the British Empire (CBE) in 1964 and a French Officier de l’Ordre des Arts et des Lettres in 1985.

His works are held in most major international art collections including MOMA, New York; Tate Gallery, London; The British Council; Israel Museum, Tel Aviv and the Fine Arts Museum, Belgium amongst others. His family home at Lypiatt Park, Gloucestershire, has seen part of the grounds transformed into a sculpture park, providing a magnificent setting for his work.