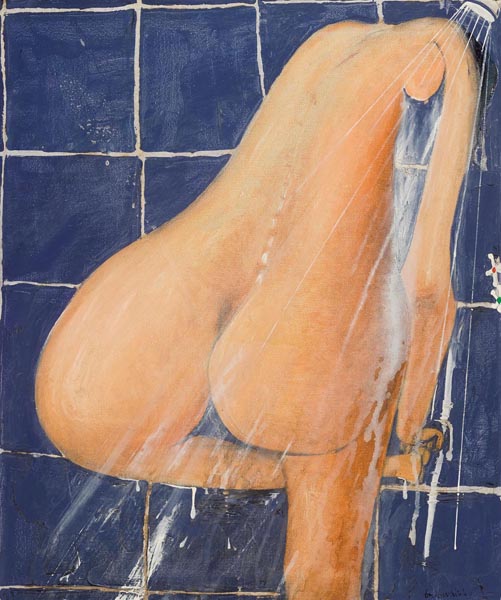 The Shower, painted in 1984, is a relatively late example of Brett Whiteley’s much-loved theme of the female nude showering or taking a bath. Inspired by his first wife and muse, Wendy, the painting displays Whiteley’s prodigious talent as a draughtsman and how he fashioned images of sensitivity and sensuality from scenes of everyday life.

Although Whiteley produced powerful and enduring images of the male nude, it was the female form that captivated him most. Whiteley summarised this infatuation when he wrote, tongue-in-cheek, in catalogue notes accompanying a 1981 exhibition of recent nudes that: ‘most men, and certainly all artists, even if many never get around to actually painting it, carry in their heads the great nude. The Venus, the Bathsheba, the Bather, Diana, even the great centrefold, he carries all his life the idealisation of his glands, carries it like some little uncut gem in his mind, waiting there to be given form’.1 For Whiteley, the idealised female form was something that he could only attempt to bring to life: curvaceous, fecund and overtly sexual as well as tender and softly-toned. In his search for the ‘perfect’ nude, the female figure was often stretched and distorted in his classic pictures that depict Australian landscapes and the beach

First exhibited as part of the ‘Eden and Eve’ exhibition held at Australian Galleries, Melbourne, in 1984, The Shower was displayed alongside some of these highly sexualised beach paintings including Bather in the Sand 1981, Spray at Bondi 1982, and paintings of Balmoral Beach. However, in order to better understand Whiteley’s treatment of the female form, one needs to look further back to the first bath paintings and a catalyst series of nudes which were completed in London over 1962-64.

In the early 1960s, Brett Whiteley’s practice underwent a transformation from abstract to figurative art. In London, Whiteley was introduced to contemporary English artists such as Francis Bacon (1909-1992) and would no doubt have encountered original works by French Impressionists and Post-Impressionists, including Edgar Degas (1834-1917), Jean-Édouard Vuillard (1868-1940) and Pierre Bonnard (1867-1947). Bonnard’s Baignoire (Le Bain) 1925, is a sensitive portrayal of his wife in the bath and shares a dominant background pattern of wall tiles circumscribed by thick grout with Whiteley’s later paintings on the same theme. Owned by the Tate Gallery in London, Bonnard’s work was an important precursor to Whiteley’s own bathroom paintings. Responding to the form of Wendy, whom he married in London in 1962, the series was partly inspired by an evening Whiteley spent at the artist William Scott’s (1913-1989) studio where he saw Bonnard’s painting in reproduction for the first time as a twenty-two year old.2

Whiteley duly acknowledged the positive effect these experiences had on his art. He commented in 1987: ‘I didn’t find my draughtsmanship until 1963. It was Wendy in the bath; it wasn’t until seeing the relaxation and the sensuality of a love affair that I could really learn to draw’.3 Whiteley sensitively drew and painted his wife in various poses in the bath, as well as under a shower. Moving from abstract to figurative, these intimate works laid the foundation for later works on the theme of bathing and have been rightly characterised as a celebration of love and sensuality, both in form and subject.

Pleasure in the female form and intimacy shared between lovers are celebrated in The Shower. Whiteley compresses and flattens the picture plane so that the nude is isolated in space and almost impinges out of its frame. The torso is elongated which emphasises the curvature of the buttocks and breasts and the steamy vapour and spray of water are also masterfully done. The painting is concerned with capturing a momentary glance of his muse as she washes herself in the shower. The woman is routinely bending forward to wash her feet, soap suds cover her side and back, it is a delightfully commonplace scene – something that Whiteley would have encountered in his relationship with Wendy many times. Moreover, the sense of ease in which he appears to render the figure’s contours and curves was something that he would have worked hard on, time and time again.

In The Shower, Whiteley substitutes the well-worn interiors of the earlier English paintings with the sumptuous qualities of ultramarine blue for the background and peach-toned colours for flesh. Colour was as important to Whiteley as the composition or the motif. It added to the pleasure to be had from painting and added to the desired levels of familiarity and repose. One slightly earlier variation of this theme for example features a nude rendered in warmer tones surrounded by a corresponding palette of plum or rose-pink.

Whiteley characteristically remarked that ‘Windsor and Newton Deep Ultramarine ha[d] an obsessive ecstasy-like effect on my nervous system quite unlike any other colour’.4 Often used in his Sydney Harbour and Lavender Bay series of paintings as well as the languid Sydney interiors indebted to Picasso (1881-1973) and Matisse (1869-1954), the use of different tones and values of ultramarine blue were associated by Whiteley with ‘rest, reflection and domestic bliss – often used to depict scenes which are as natural as a birdcall or a cat licking its paws’.5

The imagery and composition of The Shower were revisited and reworked by Whiteley several times over. It is an important precursor to the gouache drawing Nude in the Bath, 1986, which is similar in size. The distinctive white-grouted tiles and ultramarine colour scheme are also continued in Arkie Under the Shower 1986-87. The latter was a painting that Whiteley painted specially for his daughter and as Ken Wach has rightly remarked in an earlier essay for Menzies ‘is an intimate scene as though glimpsed while passing an open door...’6

Brett Whiteley’s ‘Bathroom series’ and subsequent paintings of languorous nudes have drawn outstanding plaudits over the years. Fetching record prices when they are offered, these tightly-held works are valued for their insight into Brett Whiteley’s working methods, the sources of his inspiration and the expressive possibilities he was able to obtain when depicting the nude. More sensual than overtly sexual, The Shower is a classic example of how for Whiteley, art and life are intricately entwined.