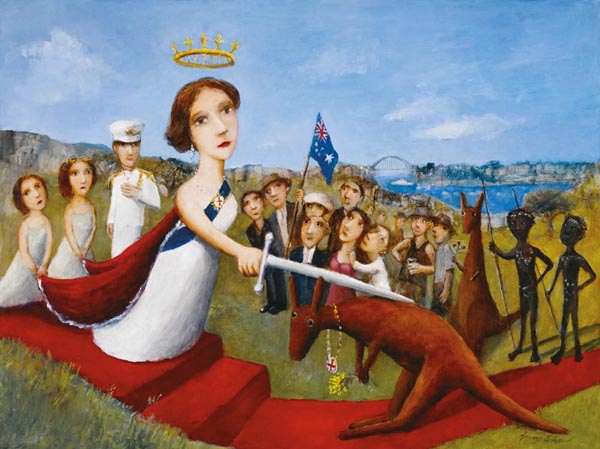 The idea of a narrative series, telling the story of some overarching myth or theme, is as old as art. It might tell of the passing of the seasons, the triumph of the monarch or the rise and fall of empire or, as in William Hogarth’s The Rake’s Progress, the decline and fall of the individual as a surrogate for the wider ills of society. In Australia, Sidney Nolan’s (1917-1992) Ned Kelly series came to define the genre that found great favour with artists of all persuasions, including his brother-in-law, Arthur Boyd (1920-1999), who followed the tortured lives of a half-caste man and his troubled bride. As a way of working, the narrative series has much to recommend it. An artist can give full flight to the imagination, gradually developing pictorial motifs of increasing sophistication as the story unfolds.

When Garry Shead first left art school, before completing his course, the notion of an ongoing narrative series was far from his mind. He worked as a cartoonist while painting pop-inspired images that ranged across the icons of the comic book and the fairground hoarding. He made films, collaborated on murals and sought inspiration alongside his contemporaries Brett Whiteley (1939-1992) and Martin Sharp (1942-2013). Shead travelled the world, experiencing life in all its manifestations, but it was not until he returned to Australia and settled in the seaside village of Bundeena, just south of Sydney, that he took up the role of the conventional studio painter. A chance find of the letters of D.H. Lawrence, somewhat bizarrely in the highlands of New Guinea, led him to the story of the famed English writer and his sojourn in Australia, much of which was centred on the small town of Thirroul, just down the coast from Bundeena.

Lawrence’s novel Kangaroo became the inspiration for a series of paintings that explored the notion of the foreigner, the white man and woman, dropped into the ancient Australian landscape. While the bearded Lawrence and his aristocratic German wife are central to the narrative, Shead developed a series of characters, both animal and human, to help carry the story. The Lawrence paintings struck a chord with Australian art lovers - his work was critically acclaimed and he was an artist in demand.

Shead took what he had learned from the Lawrence pictures and applied it to another story with clear parallels. The Royal visit of 1954, the first to Australia by a reigning monarch, had a profound influence on every Australian, especially those children growing up in the 1950s. Today, the succession of Royal scandals and exposés has leached much of the magic from the Crown, but in 1954 it was impossible not to be touched by the event. Shead took his own memories of that time and wove them into the greater mythological structure surrounding the visit. He envisaged the young Queen, who had arrived in Australia barely eight months after her coronation, as an ethereal being, always dressed in formal gown and crown jewels. The progress of the royal couple through the world of Shead’s imagination saw the tour as a descent into Alice’s wonderland, where birds, animals and people interacted without fear or surprise. The omnipresent Kangaroo, both in image and title, was a link to the Lawrence paintings, representing the ethos of the country.

In Royal Accolade the monarch dubs the hapless animal with a menacing sword, held edge-on as though to strike rather than to honour. With Sydney Harbour in the background, a motley crowd looks on, a mix of the formal and the informal, where two average blokes, tinnies in hand, stand alongside a pair of mystified Aborigines who can only wonder at the spectacle. The Queen’s crown has levitated above her head, as much halo as solid gold, perhaps raising her status to the divine before the cares of modern life impose their own reality. It is a work from which both monarchists and republicans can take heart, each finding their own messages in a world of whimsy
and symbolism.