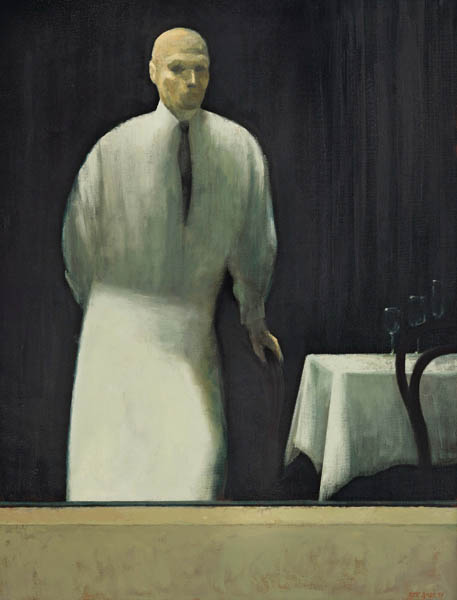 By Gavin Fry in Blog
Lot:
The Waiter

The term ‘icon’ has become perhaps the most over-used, and abused, word in the contemporary lexicon, yet in many ways it is hard not to describe Rick Amor’s The Waiter as an iconic work in the artist’s long career. It stands near the mid point, twenty-seven years after his graduation from art school and was chosen as the cover of the first monograph to document his work. The Waiter sits alongside such works as his powerful sculpture The Relic and his deeply felt work as an Offical War Artist in East Timor as one of many highlights in a career of dedication and artistic purpose. But reaching that point was, as for so many artists, a long and hard won challenge, made at times with considerable personal cost.

When Rick Amor left the National Gallery art school in 1967 he was determined that, if nothing else, he would earn his living as an artist, rather than dissipate his energies in teaching as so many of his contemporaries had done. But such an aim was perhaps easier said than done, and in the first few years he grafted away on the edges of the art world, undertaking work that paid a very modest income, while doing little to make any impression on the broader art world. His skills as a draughtsman, combined with a keen eye and quick wit, saw him making cartoons and illustrations for the trade union movement and, eventually, the weekly paper of the Communist Party of Australia. Caricature and a sharp edge are the tools of the political cartoonist and Amor soon developed a powerful style that was well received by his small but discerning market. Politicians and their capitalist cronies came under his scathing eye, as well as heroic union leaders who he depicted in a series of large paintings destined for the walls of Trades Hall in Melbourne. Seeking to expand his repertoire, he undertook a series of comic books designed to encourage reluctant teenaged readers. These works now seem a curiosity in the oeuvre of one of Australia’s most successful artists, but they were important steps along the way toward finding his own place in the art world. The discipline of producing telling work, day in day out on a regular basis, was the discipline most artists worked to in the first half of the twentieth century. Illustration and advertising were an excellent training ground, one pursued by aspiring modernists such as Albert Tucker (1914-1999) and Sidney Nolan (1917-1992), as well as successful mainstream artists like Norman Lindsay (1879-1969), Harold Herbert (1891-1945) and George Lambert (1873-1930). The hard part was lifting oneself out of the day-to-day routine and into the real world of the exhibiting artist.

For Rick Amor, the opportunity came with an introduction to one of Melbourne’s most significant art dealers of the mid-twentieth century, Joseph Brown (1918-2009). Rather than immediately offering Amor an exhibition, as perhaps the young artist had hoped, Brown tried a different tack, placing him on a retainer where he was to complete a series of paintings and portraits according to a fixed monthly timetable. While this arrangement smacked somewhat of the production line, the discipline was, like the cartooning, a crucial element in developing a sound work method for the young painter. The successful clients of Joseph Brown were probably completely unaware of his work for the union movement, but they did appreciate the character of his depictions. Amor took his caricature style into a number of paintings that reflected on a brief period when he worked in the city as a state public servant, showing the legion of faceless operatives who harked directly back to Collins St, 5.00 pm, perhaps the best known work of his mentor and teacher John Brack (1920-1999). Fortunately his work with Brown led in turn to an opportunity to put the struggle of making a living to one side for a period, taking on a live-in position as assistant to Sir Daryl Lindsay (1889-1976) and Lady Lindsay at Mulberry Hill on the Mornington Peninsula, not far from his boyhood home at Frankston. That interlude, and then the subsequent opportunity to move to Clifton Pugh’s rural art community Dunmoochin at Cottles Bridge, freed Amor from the daily grind of commercial work. The impact on his painting was profound and he entered the mainstream that has seen him rise to the top echelon of Australian art.

The works that first brought him to critical attention were the land and seascapes that had grown from his memories of Frankston, the seaside suburb where he was born and lived during his formative years. These works are not of bright and nostalgic summer holidays, but dark and moody memories of a troubled childhood. Having lost his mother at the age of twelve, and living alone with his father, a retired teacher, he turned to art while still at school. Amor’s bayside paintings are of a bleak, windswept shore, with huge clouds boiling out on the water as the wind sweeps in from the west. He nearly always included a figure or two – boys playing in the ti-tree scrub, lonely deviants lurking by the path or a solitary runner, heading to a mysterious assignation somewhere out of the picture. His work developed a cinematic intensity, a quality that carried over when he shifted his gaze to the urban and inner-city landscape. Melbourne is a city of broad avenues, linked by a myriad of back lanes and small streets designed to service the grand edifices that rose in the wake of the gold rushes and land booms of the nineteenth century. Amor was drawn to those lanes and alleys; the murky shadowed spaces where few pedestrians walked and danger lurked after dark. A working trip to New York was an important reinforcement to his approach to the inner urban landscape. Individual figures were introduced, sometimes as anonymous characters, but also as a form of atmospheric portraiture, as in his powerful study of his friend the crime novelist Shane Moloney.

As he further developed his dystopian urban subjects, Amor ventured deeper into the lanes, peering in through back windows and doors to reveal an isolated world. Lost men and women worked away on their lonely tasks, oblivious to the gaze of the artist beyond the glass. The larger and more grandiose the façade, the more isolated the characters became. The huge bluestone buttresses and foundations of the old banks and warehouses built impassable barriers, separating the lonely toilers from the outside world. Through one large window the artist saw, and committed to memory, a lone man who was to become perhaps the most memorable character in his vast body of work. The Waiter, an anonymous, bald headed man in a crisp white shirt, waits alone in an empty restaurant. As with many of Amor’s characters, the waiter developed over time, gradually gaining an image and a place in the world without ever once being revealed as an individual or a person with his own story. The waiter began as a small study just 25 by 20 cms, one of many paintings he would make in this small traditional format. Feeling the strength of the study, he then produced a larger, almost life-sized version. That painting became a signature work after it was chosen as the cover image for Gary Catalano’s The Solitary Watcher, the first book published on Amor and his art. The image was disarmingly simple, an almost monochrome study of a faceless man in waiter’s garb, gazing blankly out a window to the darkened street. In his quiet reverie he leans awkwardly on a bentwood chair, oblivious to the watcher in the street. That work in turn led to another iteration of the subject, this time the artist ‘zooming out’ to a wide screen view that shows the vast empty foyer in front, and the spacious but completely empty dining room beyond. The same waiter is now a tiny cipher, the empty man in an empty world, an image the artist saw as an ‘image of the times, the empty and vacuous world of 1990s greed and pointless aspiration’. The image found many admirers and the artist undertook a reprise on the original, enlivening the colour a few degrees in a slightly larger version that is the present work.