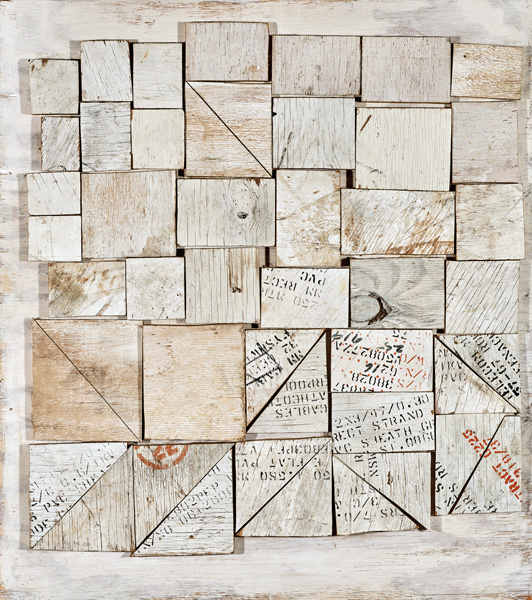 Your art has to come out of your daily life. I really believe that if anyone is born an artist they’ve only got to look at what’s around their feet and what’s available to them. The don’t have to be clever, they don’t have to go to art school, they don’t have to get the exotic stuff in – make it with what’s there. People think that art’s like you strike it lucky and you’re famous tomorrow, but it isn’t like that, it’s a search for honesty on your own terms. The journey to self-recognition took me decades.1

Rosalie Gascoigne occupies a particular place in Contemporary Australian Art. Her contribution is unique for the beauty of the works she produced as it is for the materials she used. Gascoigne looked to the everyday and to materials left in the world from use. The choice of materials may seem idiosyncratic and the value negligible, but in choosing, Gascoigne used instinct. When asked about her choices and what value they had, she simply replied by saying she collected things because she liked the look of them.

This bricolage approach leaves much to taste and to aesthetics. There was an excitement for Gascoigne in finding and adapting fundamental and non-art materials to her use. It shows a quotidian approach to value and a well-considered tilt at taste. Gascoigne was pragmatic, but very instinctive, and had a strong grasp of how any material could form an image.

Gascoigne chose to work in units, giving continuity to an idea or insight to new forms. Then, cutting and shaping would begin. Working flat, Gascoigne ordered her forms, thinking about surfaces and spacing her image, edge to edge.

In 1993, Gascoigne found the material hardwood, which she sourced from cable reels. It is the genesis of the two Gascoigne paintings of this sale, City Block 1996 and Thermals 1998. The reels had barbed wire, electric cable, and copper wound around them. Gascoigne said of the reels:

Some of them are double, some of them are single. You can get lovely wood off them that has been all weathered, if you are lucky... The small ones are too thin, tinny. You’ve got to use strong material to get your message across. And the very thick ones are too heavy, unless you slice them in half, which you can do with a lot of labour.2

Both City Block 1996 and Thermals 1998 come from white reels which were the first reels that Gascoigne worked with: ‘Sometimes you get a good grubby white… the grubbiness is part of it.’3 The reels also carried text, stencilled letters, and numbers, which were of great interest to Gascoigne as they added texture and graphic elements.

Material and shape are the principal elements of City Block. Here title and form are synonymous. The block is the child’s unit of building and innate to an understanding of architecture. The blocks as grids, describe city streets. Think New York, think Piet Mondrian’s (1872-1944) Broadway Boogie Woogie 1942-43. The perspective is both aerial and an approximation of a city where buildings and people live cheek by jowl.

There is light in this image, and it comes from the whiteness of the reel and the greys and pinks of the composition. Gaps also play their part but most effective is the lettering that masses to the lower right quadrant. The letters are gnomic but scattered for graphic effect and the trace of the wheels’ former use.

Thermals is of larger pieces and is less so an image of something, at least in title, and more a shape-poem. The scalloped forms beautifully marshal the image as they touch and abut other segments. They are dominant as quarter-circles tend to be. One thinks of ice floe and a mass of ice which could suggest the title or large barrels. Certainly, we are close to the reel shape itself. Words are forming / BLES – and letters and numbers are the floaters that our eye sees.

It is the simplicity of means that we applaud in the work of Rosalie Gascoigne. Poetry is an economy we find less so in art but is essential to understanding Rosalie Gascoigne. City Block and Thermals, the two Gascoignes of our sale are each different, but thought of as visual stanzas, they capture images as the word-fall of a poem does. The exquisite placement of each part of Gascoigne’s City Block and Thermals, is the essence and the great beauty of her art.