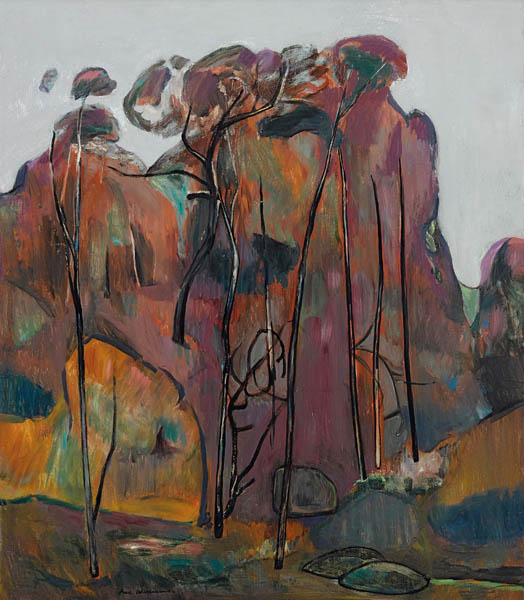 The soft luminosity and the free spill of earthy tones in Fred Williams’s early work, Purple Landscape of 1958, lead the viewer’s eye to an upper register of loosely applied and scumbled paint that seems to “hang” over the whole scene. The painting has a visual power that is arresting – it’s clear that it’s less a picture and more a painting; that is, it has a new type of painterliness in its aim. The landscape seems to threaten envelopment – just as it does in actuality in the hills and steep forests around Mittagong in New South Wales, where it was painted.

This painting was exhibited in his second solo exhibition (Landscapes by Fred Williams) at Australian Galleries in Melbourne and its exceptional pictorial qualities are highlighted when compared with those of his Treescape of the same year and exhibition, now in the permanent collection of the National Gallery of Victoria (Accession No.: 1998.5). Each painting was created in the same locality, each uses a restricted palette of colours and tones, each is characteristically unpeopled and each has a painterliness that enlivens the depiction of the respective scene.

However, upon scrutiny, it becomes clear that the present work, Purple Landscape is a more accomplished harbinger of the Williams paintings to come – it has a forerunner quality. At even a glance, one can see that its painterly curtain effect is, in embryo, the germ of his much admired hallmark works: those dappled sapling forest screen Sherbrooke paintings of the sixties – all those shadows, the forest ponds, the striated trunks. Of course, hindsight affords us this insight; for the youngish Williams in 1958 this was not the case. What he was trying to do was find a “visual language” of form that might do credit to his new view of the Australian landscape.

Thus considered, Williams’s Purple Landscape of 1958 is a seminal work. This is not to say that his Treescape of the same year in the NGV is a transitional work, but that its more “picturesque” compositional format and aesthetic qualities are more unresolved and less indicative of his later artistic development. It’s more than likely that Leonard French (1928-2017), the first owner of Purple Landscape, saw this as well. His wife Helen French later acquired it and the author well remembers the painting’s pictorial verve beaming out above the mantelpiece in her home in Kew in the mid-seventies.

Certainly, all this makes it a special painting, but what shone out then and what still shines now are the wonderful echoes of the seductive earthy tones, the luscious paint quality, the choppy shapes and the toffee-like sheen of the surfaces on all those early Cubist Pablo Picasso (1881-1973) and Georges Braque (1882-1963) paintings. It was clear that Williams had gone through a period of artistic aggregation – a type of artistic synthesis had prompted the development of a highly original and fresh grasp of the local landscape.

When Williams returned from Europe in January 1957, the year before the present painting was created, he had a number of disorienting experiences upon viewing the Australian landscape. His first port of call was Fremantle - his reengagement with the Australian landscape must have been extreme as the area is more featureless, flat and vast than most. Even the Australian Bush had its problems for Williams. It was crowded, brittle, dense and almost claustrophobic in its spatially close frontality – it seemed to hang in front of the viewer like an ochre, brown and green curtain. For him, the Australian Bush, as he later commented in a 1978 interview with the Australian artist James Gleeson (1915-2008), ‘is monotonous, there is no focal point, and obviously it was too good a thing for me to pass up … the fact that if there’s no focal point in a landscape then it had to be built into the paint …’ Williams had been away in London from 1951 to late 1956. The five-year absence sensitised his visual perceptions, the Australia that he knew now looked decidedly strange. This is similar to the experience that anyone who has been withdrawn from society for a period knows well – upon re-entering the normal world, everything – people, friends, buildings, trees – looks alien and foreign and features that once looked normal now look strange and misshapen. The famous Italian Pittura Metafisica (Metaphysical Painting) artist Giorgio de Chirico (1888-1978) felt similar sensations after being hospitalised and used it to develop a new view of the Italian urban landscape. Williams too, in a different and lengthier way, felt this and used it to develop a new view of the Australian landscape. Professor Patrick McCaughey (born 1942) in his pioneering scholarly book, Fred Williams 1927-1982, called Williams’s experience one of heimkehr (the German word for homecoming) which isolates the experience of rediscovering the familiar. The de-familiarising period in London galvanised Williams’s artistic imagination and his direction was set. His attitude was decisive. Upon his return from London in 1957, his good friend John Brack (1920-1999) asked “Well Freddy, what are you going to do? Williams’s answer was “I am going to paint gum trees”. “You can’t do that”, Brack replied, “Everybody’s done that”. Williams’s answer was definitive: “Well, it’s just what I’m going to do!” 1

Experts agree that the Melbourne based artist Fred Williams is one of the most respected names in Australian art history. His paintings hang in every State gallery and most regional galleries in Australia, as well as existing in prominent private and institutional collections. New York’s Metropolitan Museum of Art and the Museum of Modern Art each hold one of William’s paintings; Melbourne’s National Gallery of Victoria holds seven and fourteen are held in the Tate Gallery in London. His work was the subject of a major retrospective exhibition (Fred Williams, Infinite Horizons, 12 August - 6 November 2011) at the National Gallery of Art in Canberra. He has held numerous solo exhibitions and his 1977 exhibition entitled Fred Williams – Landscapes of a Continent at the Museum of Modern Art in New York, which toured to Florida, Nebraska and Texas, successfully introduced his paintings to a wider international public.

Williams had many close friends but he belonged to no artistic group and his vision was singular and highly individualised. His particular vision of the Australian landscape was artistically unique, yet it was recognised and accepted almost immediately to the point where people now speak of a “Fred Williams landscape” – an aesthetic recognition where the eye is educated by the art. In this sense he is like Arthur Streeton (1867-1943), who also changed how one sees the Australian landscape. This seemingly surprising pairing of Streeton and Williams is not altogether inappropriate, as their paintings were hung side by side in the artist’s first museum exhibition, the Heroic Landscape show at the National Gallery of Victoria in 1970, as curated by Brian Finemore (1925-1975) Australia’s first Curator of Australian Art.

Fred Williams’s elegantly realised Purple Landscape 1958 is not a “scene” painting – it’s not an optical record – it is more a response to a scene. The landscape was for Williams a subject but not an aim. His purpose was to paint in ways that might afford viewers the opportunity to apprehend anew - in this case, strikingly so.