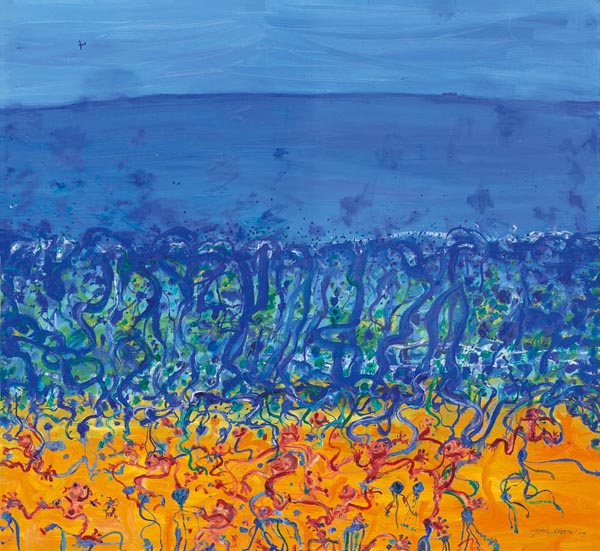 By Ken Wach in Blog
Lot:
Childhood by the Sea, Popping Blue Bottles

Collectors, connoisseurs and curators alike have long recognised John Olsen’s enduring status as one of Australia’s most successful contemporary artists. The present painting, Popping Blue Bottles, Life by the Sea of 2007, is in the uppermost register of the quality of paintings that won him perennial admiration.

Olsen was the clear winner of the Wynne Prize in 1969 (for his daringly fresh The Chasing Bird Landscape) and 1985 (for his boldly spontaneous A Road to Clarendon – Autumn), and more recently won the highly contested Archibald Prize in 2005 (for his brazenly brooding Self Portrait Janus Faced). Furthermore, in 1977 he was awarded the O.B.E. for Services to the Arts and the award of the prestigious Australian Creative Fellowship followed in 1993. He was also honored with an Order of Australia (A.O.) in 2001 and a decade later he was presented with an Honorary Doctorate from the University of Newcastle, the New South Wales historic coastal city of his birth.

As a result, Olsen came on like a storm in the early Sixties when in his wonderfully breezy You Beaut Country series of paintings he caught the whirling vitality of Australia’s post-Olympic fervor and pre-Poseidon mining-boom times. It was a type of free-form Mediterraneanism that seemed at one with Australia’s energy and easy egalitarianism. Fusty it wasn’t and there is much about Olsen’s art that tapped the pulse of the times – all up, it hit the spot with creative-minded Australians. Two things quickly became very clear: Olsen not only possessed talent but also he had dash.

There was also little doubt that Olsen’s extended period in Spain in the late Fifties influenced his life and artistic sensibility. The artist later described the shock of the sensory impact on him when he visited a street market in Spain where the bustle of the villagers and all the intense colours and sheer variety of the fruit and vegetables totally overwhelmed him: “It was … my road to Damascus”.1

He quickly came to the conclusion that “feeling” was more important than “explanation”; that artists must “feel” as well as “see”. 2 It was a pivotal moment – it uncovered the conviction that art should arise as a sensory response to a visual overload or flow from a stream of pent-up emotion. Always, the eye was to gather and the hand to respond. The artist was an antenna. Thereafter, for Olsen, art was never about “explanations”.

It all resulted in a dramatic change in Olsen’s subject matter and his colour palette. The application of the paint was still energetic, but compositionally his work became less crowded. Busy areas were balanced by larger areas of pure colour where over-painted line-drawing was more sparsely used. Also, his viewpoints often peered from above as though all scenes were topographical events. The canvas was now an inviting open field, the brush a moving seismographic point.

This is in part why the beauty of Sydney Harbour always entranced Olsen. As he put it: “that big bath; a cave of memory where all pulsates to the rhythm of the bitch goddess”.3 Living by the beach from the age of seven, when his family moved to Bondi, led to a continuing physical and intellectual wonderment at the colour and play of light on the water, and the various life forms in and around the sea and its edges.

The present painting Popping Blue Bottles, Life by the Sea, created in 2007, is a visual evocation of Olsen’s recollections of an idyllic childhood of life on the shores of the harbour. This lyrical interpretation of the shoreline, the water and the sea-life draws on the same poetic input, intensity and refinement of thought and perception that generated the aesthetic impact of his earlier work Five Bells, of 1963 inspired by Kenneth Slessor’s 1939 poem “Five Bells”, and the later monumental mural Salute to Five Bells 1972-73 commissioned by the Sir William Dobell Art Foundation in 1970 for the Sydney Opera House.

Popping Blue Bottles, Life by the Sea, with its horizontal bands of blue and yellow pigments lead the viewer’s eye upwards from the shore through the layers of the shallows to the deeper water where marine energy becomes more dissipated, leaving only hints of the life below in the deep beyond, where the sea’s distant edge meets the ocean horizon.

Not only does this compositional structure impose a vertical format on the paintings, but also it lends to the two works, most especially the present painting, the effect of leading the viewer to “read” the compositions as though they were hanging scrolls. It is more than likely that Olsen noticed the effects of this type of visual layering in the paintings of his contemporary Fred Williams (1927-1982). In many of Williams’s landscapes the picture plane seems to “hang” and then “unfold” before the viewer’s eyes. This compositional technique, essentially an Oriental attribute born of calligraphic writing practices and temple dedications, invites the viewer to adopt an unusual “up and down” rather than “side to side” scanning.

Considered in these compositional ways, Olsen’s highly accomplished Popping Blue Bottles, Life by the Sea bears some stylistic relationship, not only to the works of Fred Williams but also to international abstractionists such as the American Mark Rothko (1903-1970).

Furthermore, in Popping Blue Bottles, Life by the Sea Olsen captures the energy of shoreline life-forms in the sand and the ebb and flow of the sea as it leaves its rivulets of blue in the glowing Cadmium Yellow sand. The rock pools, crowded with leaping red frogs and crabs scurrying in every direction to escape the blue tentacles of the blue bottles, fill the canvas with life and energy. In this, and with other works in the Blue Bottle series, such as Popping Blue Bottles of 2007 and Chidhood by the Sea–the Blue Bottles Arrive of the same year, the layered, flattened picture plane acts as a visual repository for the memories dredged up from the artist’s “caves of memory”.

What we see in Popping Blue Bottles, Life by the Sea is a pictorial transcription of Olsen’s recollection of the childhood game of “popping blue-bottles” after the turbulent waves had dumped the stinging Blue Bottles (also known as the Portuguese Man o’ War (Physalia physalis) on the sand. The pain of being stung by the poisonous creatures’ blue-violet tentacles was treated by Gentian Violet: an antidote here visually represented in the tumbling forms of the frogs and other busy shallow water life-forms against the intense yellow of the sand..

35. JOHN OLSEN Childhood by the Sea