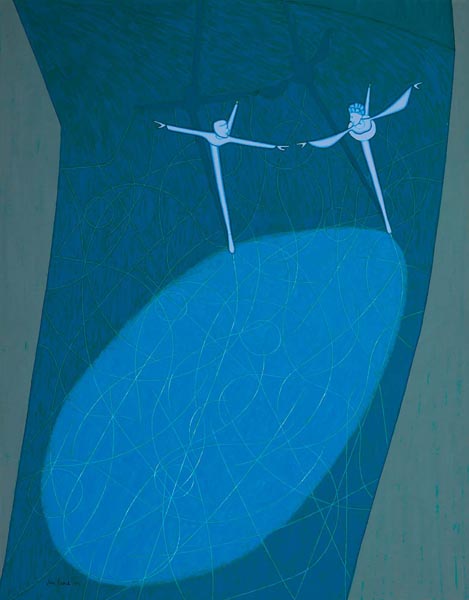 By in Blog
Lot:
Finale

Finale 1973, was the last and most ambitious of John Brack’s Ice skating rink paintings. It was one of the key paintings in his exhibition held at the Joseph Brown Gallery in Melbourne in July 1973, where it promptly sold and later that year it was re-exhibited, marked ‘not for sale’, at the Rudy Komon Gallery in Sydney, where it attracted the praise of the local art critics.

Prior to this, John Brack had just completed the successful Ballroom dancers series and the last of his Shop window paintings and in November 1972, at the age of 52, he embarked on his first trip abroad. Brack, accompanied by his wife, spent most of his time in the art galleries of London, Paris and Amsterdam. He returned to Melbourne on 22 February 1973 and promptly commenced work on the three Ice skating rink paintings which he exhibited later that year. They were the two versions of Up in the air and the Finale.

The main conceptual preoccupation of the Ice skating rink and Gymnast series of paintings Brack articulated in a lecture in 1977. He described them as a series of paintings where ‘the idea … is related to balancing and falling, but not absolutely collapsing – you know, the world is going on in a series of stumbling lurches, but not absolutely collapsing … it is not the abyss, it is stumbling, but not the abyss.’1 While in their formal structure in these paintings Brack is concerned with balance and imbalance, with movement and stability and with unity and discord, conceptually they continue with the theme already explored in the Ballroom dancers series and in such paintings as Backs and Fronts 1969 and the Latin American grand final, 1969. It is the idea of the precariousness of being - of superficial rituals and of competitive relationships. All of these paintings can all be interpreted as making a broader allegorical comment on life and marriage.

The couple in the Finale 1973, has been reduced to stick-like mannequin figures, one clearly female and the other male, and they are shown precariously balanced on the edge of an arena illuminated by a spotlight. The specificity of these figure skaters has been abandoned in favour of a universality of meaning. These precariously posed performers are shown about to enter for the last time the glow of the spotlight for their finale. They can be seen as making a general statement about the fragility and complexity of life. If one glances at the traces on the ice made by the blades of their skates, it is clear that they are retracing a path which they and many like them have travelled before. Their finale performance is all about the difficulty of negotiating a slippery and treacherous surface while being watched and exposed to the merciless gaze of the harsh spotlight. The arena itself bears all of the traces of the earlier competitors, like the scars of a battlefield, which were to characterise the battlefields in Brack’s later paintings of armies of pens and pencils. This figure skating duet seems to reach out to one another – the hands almost join, but don’t quite meet. In the shadows that they cast from a second and unknown light source, their hands are brought even closer together, but again no real contact is established.

In October 1971 Brack had successfully entered a painting from his Gymnast series, Three pairs 1971, in the Travelodge Painting Prize, which was then Australia’s richest individual art prize. When he was awarded the prize with a blaze of publicity, the art critic Patrick McCaughey noted that ‘he transfixes his youthful gymnasts to the picture plane so that they neither float nor wilt but remain scrawnily human and gawkily agile’.2 In Finale 1973, Brack made a huge advance on the Travelodge painting, whereas in Three pairs 1971, he employed the eccentrically slanted floorboards rushing like a great river of life, an artistic strategy which he devised in the early 1960s and perfected in the Ballroom Dancers series, in the Finale  painting the ice skating rink has become a single and ambiguous field of vision which has then been tilted in relation to the picture frame. An abstracting background of grey, which may be interpreted as the undefinable walls surrounding the ice skating rink, forms an undifferentiated sea within which floats this arena of the performance. This trompe l’oeil device is employed to heighten the general sense of instability of the whole compositional structure. The whole idea of a finale is that of the culmination of a performance, of a relationship or of a life’s journey. It denotes some sort of conclusion, yet somehow all of this has been subverted and this moment of triumph speaks of an impending doom. It is this idea of skating on the edge of an abyss that is central to this painting and no matter how beautiful and how well rehearsed is our performance, we are conscious that at any moment we are on the edge of a disaster and that this disaster seems inevitable. Quite literally we are shown as skating on thin ice, but somehow, and against all of the odds, we as individuals, as couples and as a civilisation, we are still standing and repeating our uselessly acquired skills, apparently oblivious that all is stacked and tilted against us and that the abyss beckons. The performers are shown stumbling, but not quite collapsing.

In the Finale painting Brack has also broken away from the mauves and pinks of the bodies and the chocolaty browns of the settings as found in the Gymnast series, to attempt a most difficult and challenging essay in blue, particularly in light blue, a colour with which he rarely experimented on such a scale. There is also an associative play with the idea of blue and ice and of blue figure skaters negotiating this icy blue surface where the patterns on the ice can be read as witty organic designs which contrast with the hieratic and angular geometry of the figures themselves.

When the Finale painting was exhibited in Sydney, the art curator and critic, Daniel Thomas, observed that the exhibition ‘is a delight but no great surprise, he [Brack] is still one of Australia’s best painters. This time it’s mostly children in the gymnasium, the ballet class or ice-skating, all perfecting their skill at difficult, absurdly useless, artificial activities. Everything is precarious, in a moment there might be a collapse. Such subjects are chosen to energise what is, after all, a very inert kind of difficult, artificial object, namely a rectangle of hand-painted canvas. And the compositions are equally precarious and complex, planes tilting and lines shooting in all directions … Brack is a very calm person in real life, so his pictorial search for the razor’s edge between stability and collapse must be a romantic yearning for the unknown’.3  The art critic Nancy Borlase wrote about the same exhibition. ‘There is no artist in Australia who walks a tightrope more successfully than does John Brack. His art lies in his expression of the banal and the ordinary without becoming so himself, a difficult feat of balancing to which few can aspire’.4

Finale, 1973 was painted by John Brack at a time when he was being widely recognised as one of Australia’s most significant painters. It also marked a certain turning point in his own art and within a couple of years he abandoned this form of figurative composition, and with the occasional exceptions of nudes and portraits, in his subsequent art he employed only postcards, knives, forks, pens and pencils to make a comment on the human condition.