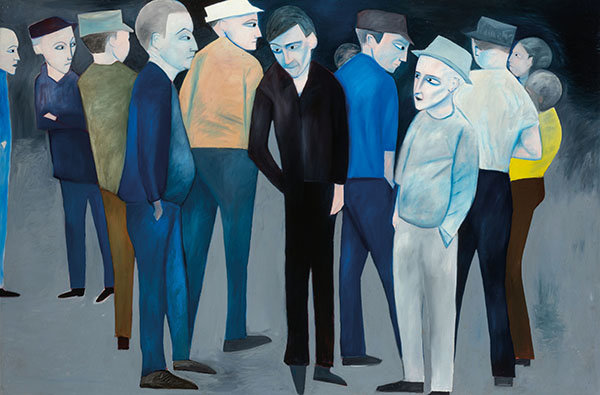 Robert Dickerson developed a visual language and ascetic style that is instantly identifiable, forging a successful career as an artist without any formal art school education. Gifted with an original vision plus a dogged determination to paint, Dickerson became a highly recognised and admired elder of Australian art, continuing to paint and draw into his nineties.

While Dickerson’s success was enviable, his was not the traditional trajectory of an artist. Born into Depression-era Sydney, like many children of this period Dickerson did not escape the harsh realities of life. He began working from a young age and by fifteen was boxing, earning five pounds a match and throwing matches for greater payment.1 When he was eighteen he joined the Royal Australian Air Force, and at the conclusion of World War II found himself based on the Indonesian island of Morotai for twelve months waiting to get home. Here he read The Moon and the Sixpence, the novel based on the life of Paul Gauguin (1848-1903) and was inspired to paint and draw the locals.2 The artist’s widow Jennifer Dickerson credits the camouflage coloured paints and tent canvas he painted on as influencing his early palette of muted greens, black and browns.3

Upon returning to Australia, Dickerson continued to paint for the love of it and he eventually connected with a network of artists that included the Boyds and Percevals. He was invited by John Brack (1920-1999) to participate in the famed Antipodean exhibition in 1959 and signed the manifesto written by Bernard Smith that sought to uphold the validity of the representational image amidst the proliferation of abstract painting that had taken hold. Dickerson’s participation in this notorious event in Australian art history, coupled with subsequent representation by prominent art dealer Rudy Komon, helped to cement his career. By the late 1970s when the present work was created, Dickerson was at the height of his creative powers.

In The Strikers we see a classic example of the artist’s ability to assemble stage-like compositional elements to frame an aspect of the human condition. Dated 1978, the work was created against a backdrop political tensions between the Malcolm Fraser led government and union power. During that year alone, strikes and walk-outs occurred across different states and multiple industries in Australia including coal mining, wharves, telecommunication, metal trades and meatworks. A painter of human anxieties often framed by urban experience, it is easy to see why this topic appealed to Dickerson.

Depicted with hands in pockets, shoulders slouched, and suspicious facial expressions, the artist uses body language to convey an image of disgruntled men. Their simple attire and headwear denote working class status, reinforced by the title of the painting. Varied sidelong glances establish a psychologically tense space within the picture plane.

Following the direction of each individual’s gaze within the painting, the viewer’s eye zigzags around the canvas. Contemporary artist Nicholas Harding (born 1956) notes the subtlety of the present work’s composition, and the sense of ‘individual consciousness’ it conveys.4 There are multiple figures in the painting which is rare within the artist’s oeuvre, yet Dickerson manages to retain the essential quality of the individual within the depiction of each. Rather than portraying the collective or a group with a unified purpose, we are presented with isolated figures who are brought together in physical space but retain a sense of separateness despite their proximity to each other.

Jennifer Dickerson states that ‘Bob painted supposedly lonely people, because he felt that’s how people were. That’s how he felt. So he put himself into the people as well.’5 Like the sharp lines and angles that define his style, Dickerson painted with an often raw, incisive clarity about the experiences of isolation framed by urban life. This unpretentious artist from a working class background chose not to sugar-coat the reality he saw around him, and this quality of veracity keeps his work continuing to engage contemporary viewers.