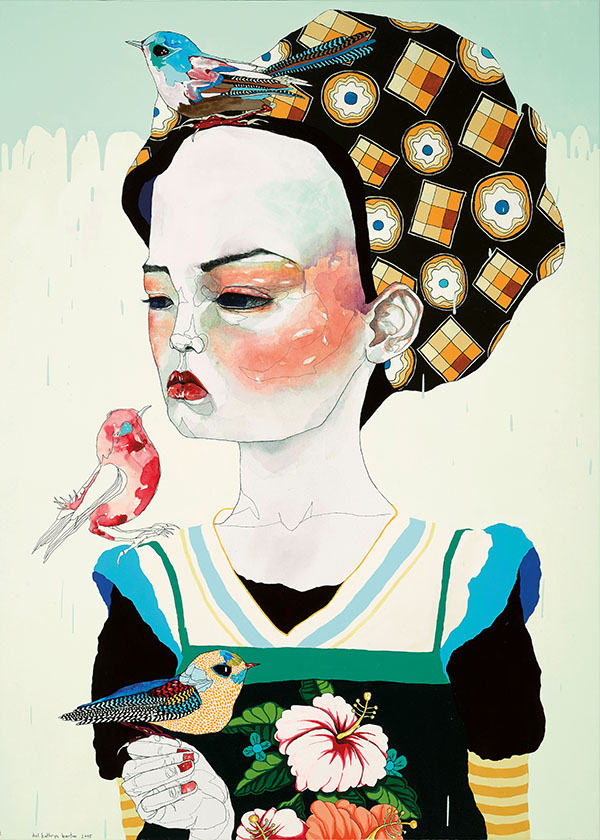 By in Blog
Lot:
Untitled Girl

Untitled Girl 2005 dates from a critical phase of Del Kathryn Barton’s career, when her creative practice and unparalleled style was consolidated, laying the groundwork for the much-coveted, large-scale paintings that would follow.

Although Untitled Girl is a painting, the foundation of the work centres itself around drawing, an innate aspect of Barton’s practice.  Barton’s interest in drawing has grown from a very private place: when experiencing episodes of anxiety and sensory disorders as a child, Barton drew as a way to calm herself down, bringing herself back to the present and re-inhabiting her body.1 After graduating from the College of Fine Arts at the University of New South Wales in 1993, she was appointed lecturer in drawing, further solidifying the foundational cues that are realised in the present work.  Julie Ewington suggests that Barton’s connection to drawing can be described with reference to Philip Rawson’s seminal 1969 text Drawing: ‘A kinesthetic practice of attraction, extraction, protraction – drawing is born from an outward gesture linking inner impulses and thoughts to the other through the touching of a surface with repeated graphic marks and lines.’2

The female form and spirit have always proved to be a keen focus of Barton’s work, and with the birth of her second child in 2004, just a year preceding the inception of Untitled Girl, Barton continued to explore various aspects of female identity.  While Barton’s paintings often place female sexuality front and centre, we see a more subtle and demure interpretation of femininity in the present work. There is a stillness and silence existing within Untitled Girl, where Barton’s emotions are implied rather than explicitly detected, culminating in self-contained poise.3 Barton’s paintings often draw upon the relationship between women and the natural world, as shown by the three jewel-coloured birds which perch on the hand, shoulder and head of the figure in the present work.  Birds form an enduring motif of Barton’s oeuvre, charting the metamorphosis of women throughout life.

Celebrating a wide variety of media within her work, Barton allows them to breathe upon the canvas, encouraging each of their qualities to be explored. The soft washes of pastel pink watercolour seeping across the woman’s cheekbones are juxtaposed against the harsh black gouache used to convey her headscarf. Using a variety of media within the one work not only shows Barton’s versatility as an artist, but may also pay tribute to the many paths and inner journeys she has experienced as an artist and woman in the 21st century.