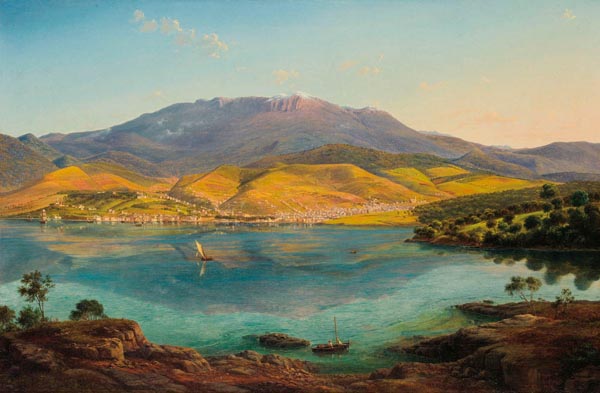 By Ken Wach in Blog
Lot:
View of Hobart Town, with Mount Wellington in the Background

In Eugene von Guérard’s paintings what is offered is always more than what is depicted. That is the essence of artistic Romanticism. Always, there is a reaching beyond the mere appearance of things – that is, beyond the more meagre grasp of Realism. So it is with von Guérard.

What is clearly depicted in the present painting, von Guérard’s View of Hobart Town, with Mount Wellington in the Background of 1856, is a precisely detailed panoramic vista of the capital city of the Australian state of Tasmania - just fifty-four years after it was founded.1 After Sydney, Hobart is Australia’s oldest capital and its estuary location at Sullivans Cove at the mouth of the Derwent River, sheltered from inland storms by the towering 1,271 metres high mass of Mount Wellington, provides a geographic haven in Tasmania’s south-east, ocean-etched, stormy coastline.

Von Guérard’s View of Hobart Town, with Mount Wellington in the Background of 1856 clearly offers a protective prospect made even more welcoming with its subtle use of burnished tones and its indirect hints of an idyllic existence. The painting’s environmental harmonies prevail and their colours tint the uncrowded bucolic scene with the warm mineral earth tones of jade, turquoise and amber. Its sheltering snow-capped mountain and rolling foothills lend the harbour scene an aura of safeguarded isolation and the harshness of the largely unexplored inland of Tasmania does not intrude upon this Antipodean Arcadia. There is no taint of factory smoke or urban haze; the pristine water of the cove shows barely a ripple and the whole of the coastal scene is devoid of anything that might disturb its sanctuary-like peace and air of tranquility.

The conceptual fusion of these many painterly and aesthetic attributes points to a rigorous academic training. Von Guérard was an Austrian-born artist who worked in Australia from 28 December 1852 to 4 January 1882. Initially he had modest luck at the Victorian gold diggings in Ballarat, but he eventually took to painting rather than prospecting. He had, after all, already toured Italy to see the Old Masters with his artist father and studied landscape painting at the famous Düsseldorf Academy of Art in Germany under Johann Wilhelm Schirmer (in contemporary times, the Düsseldorf Academy is associated with the internationally famed artists Joseph Beuys, Sigmar Polke and Gerhard Richter).

At the time, the idea of a conscious and close fidelity to Nature held sway in Europe and England and in many ways it was von Guérard’s continued insistence upon this overall technical aim that, when he was the Head of the National Gallery School of Painting in Melbourne (1870-1881), eventually diluted his appeal. It was an insistence that came to run counter to the fresher “impressionistic” leanings of a younger generation of artists that included Fredrick McCubbin, Tom Roberts and Rupert Bunny. Von Guérard retired from The Gallery School, as it was colloquially called, and left for Europe and London in 1882. Tragically, he lost all his financial investments only about a decade later in the Australian Bank Crash of 1893 and died virtually penniless at Chelsea in London on 17 April 1901 – just four months into the year of Australia’s Federation.

Von Guérard’s artistic contributions are more than firmly cemented into Australia’s nineteenth century cultural history and he belongs in the same praiseworthy company as Nicholas Chevalier (1828-1902) and Louis Buvelot (1814-1888). Each of them were cultivated men and fully accomplished artists who, with their fresh insights and European training, took Australian art and imagery beyond the understandable restrictions of a Colonial visual culture that tended to be over-represented by illustrations of ethnography, topography, botany and exotic curios.

Von Guérard’s View of Hobart Town, with Mount Wellington in the Background of 1856, originally from the famous Dalgety Family Collection, radiates a distinct sense of compositional repose. Upon careful scrutiny it presents to the perceptive viewer a clear and carefully constructed whole that is as complete as a gripping novel that has an obvious beginning and a fitting end. Von Guérard’s carefully worked painting is not an “impression”, a quickly glimpsed vignette or an illustration of a narrative. To the contrary, his painting seems to be infused with a hidden structure that magnifies its meticulousness – so much so that its visual clarity and compositional structure interact in a symbiosis that complements the visual impact of the painted landscape. As a consequence, the present painting possesses a “preserved in aspic” visual historicity, a polished attention to fine detail and a “timeless” fixity.

The secret behind these clear and lapidary attributes lies not only in von Guérard’s painting techniques and visual style, but also in his compositional use of the pictorial device known as The Golden Rectangle. The famous Golden Rectangle was known to the Pre-Socratic Greek mathematician and philosopher Pythagoras (560-480 BC) but first published in the book Divina Proportione (Divine Proportions) in 1509 by Fra Luca Bartolomeo de Pacioli (1444-1514), who was Leonardo da Vinci’s mathematics teacher. A Golden Rectangle is formed by drawing a square, marking a midpoint on one of its sides and using that point to describe an arc with the opposite corner as a radius. This arc is then used to extend an edge of the square to form a rectangle. The resultant rectangle, with a ratio of 1 to 1.6 (the proportions of the common credit card), has always been considered to have highly pleasing proportions and is most famously used in the façade of the Parthenon in Athens, the United Nations building in New York designed by the Brazilian architect Oscar Niemeyer (1907-2012), and the Villa Stein at Garches in Paris designed by the French architect Le Corbusier (1887-1965).

Needless to say, von Guérard in his View of Hobart Town, with Mount Wellington in the Background makes conscious use of this historical device, though it must be admitted that the visible proportions of this canvas are just 7 millimetres short of the perfect dimensions – a factor probably occasioned by the necessary use of a canvas stretcher or by the overlapped edge of the picture frame.

The distinct area of the Golden Rectangle in von Guérard’s painting is subtly divided into five horizontal pictorial zones (the darker foreground; the blue water mid-ground; the yellow ochre central band; the mountain and the upper expanse of sky) that, taken as a whole, strengthen the optical “hold” of a lateral view of the picture plane. This is all the more necessary since the composition does not have a traditional perspectival vanishing point (much later, the Melbourne-based artist Fred Williams also made use of this “louvred” pictorial slatting device in some of his landscape paintings). This innovative banding feature allows von Guérard’s painting to be “read flat” rather than viewed as a receding “hole in the wall” attempt to render spatial depth by drawing the viewers’ gaze upon pictorial elements that recede toward a single vanishing point.

As a consequence, the viewers’ visual engagement with the present painting is amplified. One scans the detailed jewel-like offerings of this work – it is a different type of aesthetic experience and one “partakes” of the painting rather than “enters” into it. This form of experiential engagement, with its intimations of Edmund Burke’s earlier concept of The Sublime, is somewhat similar to that which is offered by von Guérard’s equally impressive A View of Geelong painted during the same year as his View of Hobart Town, with Mount Wellington in the Background. It is constructive to consider these two highpoint works as non-identical twin paintings born during the same year - just four years into von Guérard’s thirty year period in Australia.

Von Guérard’s A View of Geelong, also originally from the Dalgety Collection, was bought for the record sum of $1,982,500 (IBP) by Baron Lloyd-Weber (the English composer Andrew Lloyd-Weber) at Christie’s Melbourne auction on 29 April 1996. The painting now hangs in the Geelong Gallery having been purchased privately in May 2006, through the efforts of the Geelong City Council, the generosity of numerous donors, a public fund-raising program and a substantial grant from the Victorian State Government. 2

Von Guérard’s A View of Geelong presents an expansive view from “Highett’s Farm” in the Barrabool Hills, across the Barwon River gorge and its adjacent golden pasture land towards the purple haze of the distant You Yang Mountains and an adjoining stretch of Port Phillip Bay. It shows a sparsely populated landscape that is decidedly pastoral rather then urban in its broad character. The painting’s proportions also echo those of The Golden Rectangle (a little less so than the present painting) and the work shows a comparable use of horizontal banding as a pictorial device to suggest spatial expanse and panoramic grandeur.

Von Guérard’s foremost paintings of 1856, View of Hobart Town, with Mount Wellington in the Background and A View of Geelong, show an obvious and even-handed attention to all parts of the Australian landscape as though to suggest some form of deeply personal respect for the extended vastness and magnificence of Nature. These two major paintings also show the aesthetic results of an extremely even depth-of-field focus – everything is painted with the same visual clarity - a democratic optic that hints at a pantheistic order in all things. It is this underlying synergy - between obvious optical clarity and implied universal order - that supplies the curious, almost pulsing, inner energy of these twin paintings. In both mature works, the mellowed land seems almost alive and Man and habitation are made to appear as incidental encroachments upon the majesty of Nature. In both, one senses the guiding hand and perceptive mind of the forty-five year old artist as acting in close sympathy with what Alexander von Humboldt (1769-1859) believed: that Nature is an holistic entity with a sublimely eloquent message.3 The stereoscopic unity and lack of pictorial featurism of von Guérard’s two foremost paintings of this pivotal period own much to this motivating environmental belief.

Von Guérard’s View of Hobart Town, with Mount Wellington in the Background of 1856 may be instructively considered as a gigantic Rorschach blot splayed out from its mid-point shore line. The painting’s natural forms invite the viewer to peer into its limpid surfaces to read its inner content. It depicts a shore-hugging Tasmanian geography together with its newly founded freshwater dependant European settlement community and serves as an aesthetic document of the history of a new cultural incursion. The painting also offers and suggests as much: the taming of wilderness; the emphasis upon topographical accuracy; the beginnings of exploration and industry and the mirrored interactions of Man and Nature. As well, the present painting exemplifies an almost rhapsodic identification with the land that reflected something deep within von Guérard himself.

Frederick Antal (1887-1954), the World Authority on Romanticism, holds that art is “a creative experience fused in the crucible of life.”4 The welding of von Guérard’s European training and experience, the fusion of visible form and hidden content and the linking of what is seen and what is felt are all seen to best advantage in his View of Hobart Town, with Mount Wellington in the Background of 1856. The painting’s historical importance and aesthetic impact are deep and direct; it brings an old Romanticism to a New Land.

Allen, C., Art in Australia: From Colonization to Postmodernism, Sydney, Thames and Hudson, 1997

with Mount Wellington in the Background 1856