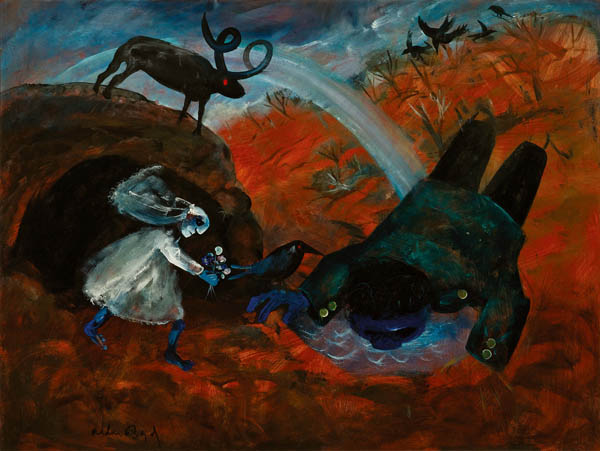 By Ken Wach in Blog
Lot:
Bride and Bridegroom with Rainbow

Arthur Boyd never wore a belt because he believed that it would restrict his circulation. Even such a small detail says something about his essential difference from others. His Christian Science upbringing was fundamental and it instilled in him a strong work ethic and a self-belief that sustained him through grueling times and periods of serious poverty. Yet, he died a multi millionaire and was awarded a Companion of the Order of Australia in 1992 and voted Australian of the Year in 1995. He remained intensely private and humble all his life and found it almost impossible to discuss any aspect of his work.

Arthur Boyd was discharged from Australian Army service on 2 March 1944 and he married his wife Yvonne on 6 March 1945 at the Reverend Stanley Neighbour’s manse in Oakleigh on a weekday, after work. No celebrations were held and no one was invited to the marriage event. The couple honeymooned at the small Victorian seaside town of Apollo Bay, one hundred and fifty-four kilometres west of Melbourne. Even these few facts give some indication of the humility, intense shyness and privacy of the man. Boyd lived his life completely through his art. On his deathbed his last words to his sister Lucy were: ‘I have paint on my hands’. He had neither time nor patience for little else; as a result, very few Australian artists can claim a full sixty-two years of successful exhibitions.

Love, Marriage and Death of a Half-Caste or the Bride series, as it is commonly called, was created in the mid Fifties and probably arose from Boyd’s personal thoughts and keen observations made on a trip to Central Australia in 1951. The series was first shown at the Australian Galleries in Melbourne in April 1958.  Paintings from the Bride series were later shown in many exhibitions, especially his first London exhibition at Zwemmers and his retrospective at the Whitechapel Art Gallery in 1962. The Bride series earned Boyd praise and brought him considerable fame.

It is quite difficult to pinpoint the exact source of the brooding impact of the series, but the influence of the publicity surrounding the idea of Aboriginal assimilation in the mid Fifties cannot be underestimated. Many of the issues that underpinned this idea were implicit in the Aboriginal Act of 1939 and its protectionist agenda, which tacitly, and sometimes not so tacitly, promoted the absorption and assimilation of Aborigines. Times have changed and assimilation has been taken over by integration and then in turn by self-determination. It is easy to speculate that Boyd’s humanistic temper and Christian Science views were deeply offended by what was happening to Aborigines and by what was being proposed in the early to mid Fifties. It is quite likely that these thoughts supplied Boyd with a unifying thread that runs through the Bride series. Typically, Boyd plays his cards close to his chest and guards his opinions, but perhaps the best of the Bride series, his Shearers Playing for a Bride of 1957 in the collection of the National Gallery of Victoria gives something away. The painting shows three Aboriginal male figures gambling to claim a white bride who stands to the right of the canvas ready to give a bouquet of flowers to the claiming winner.  Boyd’s black ram, his symbol of carnality, interposes between the two main elements of the picture plane. The most ominous part of this painting is placed almost directly in the centre of the canvas where a large double image of a human skull presides over the card game. Boyd’s feelings about integrationist and assimilation issues are made clear: in this scheme, the Aborigine is doomed.

Boyd’s oil painting Bride and Bridegroom with Rainbow of 1960 was painted in London and it shows the bride with her new husband, wearing a military or police jacket, watching while he leans down to drink from a waterhole outside a small cave.  Though this waterhole is placed at the end of a rainbow it is by no means certain that its contents are potable, since poisoning of waterholes was not uncommon. This reading is supported by the fact that the scene is watched over by a number of flying crows, birds that feed on the dead, while one of them is perched ominously on the figure’s right hand. Boyd’s black ram looks over the whole scene and the bride, her skin already coloured by the union, offers up her bouquet. The human drama and odd union of this couple are underlined in all the paintings of the Bride series.

The narrative tension of the Bride series is also played out in a related painting of 1955 entitled Half-Caste Wedding. In this painting the Aboriginal man and white woman hold each other to the left centre of the work. Immediately behind the woman is a cow skull and adjacent to this is a windmill. All of these elements point to the woman’s pastoral origins. By contrast, next to the Aboriginal man stands a kangaroo with Aboriginal marking standing on a dead Aborigine. These elements stand for the Aboriginal man’s background and the dead figure symbolises the future of the race. A two-storey house stands behind the embracing couple as an indication of the couple’s wedded bliss. Their embracing, Marc Chagall-like bodies float in the house’s upper section in imagined happy union, while the vicar with his white collar looks over the whole scene.

Another fine work that is comparable to Boyd’s oil painting Bride and Bridegroom with Rainbow of 1960 is his tempera and oil painting entitled Bride Running Away of 1957.  In this painting the Aboriginal male figure is seen with his arms outstretched towards his fleeing bride who runs towards the right of the canvas, with a crow perched on her veil. The whole scene takes place under a full moon, whose light reveals a boat and ocean hinting at an escape to another land or island. It is an escape that, perhaps, precipitated the obvious tension and disagreement of the scene. Whatever the case, the prospects of the union are not good.

Boyd’s foray into the iconography of the Bride series of paintings was most likely prompted by the rise of an interest in myth making and myth searching in Australian art and culture. Beside Boyd, the most successful of these was Sidney Nolan’s Ned Kelly Series of paintings, Albert Tucker’s Australian Head Series and Patrick White’s book Voss of 1957. Boyd’s painting Bride and Bridegroom with Rainbow of 1960 sits in very fine company and is part of a historic cultural trend that searched for a distinctive Australian cultural voice in the mid Fifties and Sixties. Boyd’s accomplished work Bride and Bridegroom with Rainbow fits precisely in that search and its stands as an important part of Boyd’s iconic the Bride series of paintings.