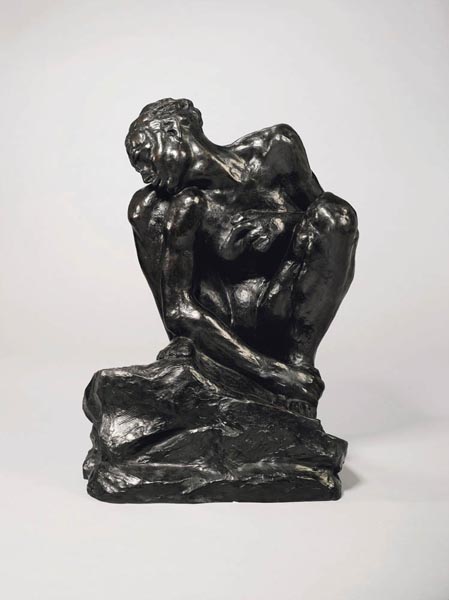 Rodin is the world’s best-known Twentieth Century sculptor. In fact, he is almost history’s best-known sculptor, falling somewhere behind the incomparable Michelangelo in the public mind. This is something that Rodin would certainly have accepted since Michelangelo was the sculptor who he admired above all others.

These introductory comments are quite pertinent since the present work La Femme accroupie, grand modèle avec une Terasse plus haute, owes part of its compositional structure and form to Michelangelo. More specifically, to the only sculpture by Michelangelo in the famous Hermitage Museum in St. Petersburg. The work is his Crouching Boy of 1530-1534, a white marble work that shows a youth hunched on the ground with his knees almost at shoulder level.  His head is bowed down and both hands clench his right foot. The sculpture has a compacted energy and its “at rest” posture contains the force of a compressed spring – this is the inner source of its sculptural impact. Interestingly, the face of the young figure seems focused upon its foot, as though examining a cut. Everything comes from somewhere and there seems little doubt that in this charming work Michelangelo distantly echoed the well-known and justly famous Hellenistic Greek sculpture Spinario showing a boy removing a thorn from his foot, from the fifth century BC and now in Rome’s historic Capitoline Museum. This ancient Greek sculpture was immensely popular in the Nineteenth Century and every art lover and artist of any note knew it well. However, Rodin did not actually see Michelangelo’s sculpture in the Hermitage but it is virtually certain that he possessed or at least saw a black and white photograph or postcard of it. In this way Rodin’s La Femme accroupie may be seen as a refinement of this ages-old crouching figure theme – indeed, it may well be a culmination of the theme since, sometime after Matisse, the theme dropped off into disuse.

All this goes some way toward explaining why Rodin’s La Femme accroupie has been so admired and commented upon. Rodin’s domestic sized bronze sculpture is a compacted composition that owes its visual power to a historically transmitted thematic concept that runs back through Michelangelo to Hellenistic times – that is, the idea of making a sculpture based upon the capture of a momentary gesture or movement. Rodin takes this a little further and centres upon the capture of an emotional state. Rodin’s sculptures almost always capture rest, repose and ease – as though, in his sculptures, we witness the after-effects of effort. For example, a good Baroque sculpture looks as though it is “frozen” in time; a good Rodin looks as though it is “melting” after the time. The hidden power of Rodin’s incorporation of this idea rests upon the seemingly impossible task of making a hard and intractable material such as marble or bronze look as though it is in transition to becoming soft and flexible. In this sense, as the present work amply shows, Rodin ably captures such seeming transition best of all. In Rodin, hard material seems to become soft, stone and metal seem to become flesh and the whole effect is rounded off by an aesthetic of transmutation. Before Rodin, only the magnificent Michelangelo achieved this. It winds its way through his superlative Dying Slave marble in the Louvre in Paris – little wonder that this Renaissance masterpiece was Rodin’s favourite sculpture.

Most serious collectors, sculptors and curators have responded to the hidden power and subliminal eroticism of Rodin’s sculpture including the present work. This work has been discussed by great art historians such as Leo Steinberg (1920-2011) and Albert Elsen (1927-1995) and described by writers as diverse as the Symbolist Gustave Flaubert (1821-1880) and the Occultist Aleister Crowley (1875-1947).

The American academic and commentator Leo Steinberg wrote that looking at a Rodin is like seeing a “congealed reflection of what a departed mirror has left behind”.1This wonderfully apt simile captures the sense of seeing something private, personal and hidden. Rodin is the undoubted master of the vignette – decidedly not a peepshow where we are invited to peer, but rather a window that opens onto a diorama that displays only that most evanescent of things: moods, emotions, feelings and subjective states both fabricate and furnish Rodin’s sculptures. Since we all possess these inner states we all respond to the hidden pulse of Rodin’s captivating creations.

Rodin had a secret. The way that he achieved this hidden pulse was through what he called “le modelé”. He explained it in private to the inimitable German poet Rainer Maria Rilke (1875-1926), who relayed it in a letter to his wife the sculptor Clara Westhoff in 1902 “Le modelé” … I know what that means … it is the science of planes as distinct from contour, that which fills out contours. It is a law governing the relationship between these planes. You see, for him there is only the “modelé” 2Rodin is more expansive when talking to the interviewer Paul Gsell:

I am going to tell you a great secret. The impression of real life … do you know what it is that gives this impression? It is la science du modelé. These words will strike you as commonplace but you will soon judge their full import. This science du modelé was taught to me by a certain Constant who worked in the decorative sculpture shop where I first started out as a sculptor. One day, seeing me model a Corinthian capital in clay, he said. “Rodin, you are going about it badly.  All your leaves appear flat.  That’s why they don’t look real.  Make them so that they shoot their points towards you”. I followed his advice and was amazed at the result I obtained.  “Remember well what I am telling you”, Constant continued. “From now on when you model, never look at your forms in extension, but always in depth. Never regard a surface as anything but the outermost point of a volume, as the broader or narrower summit, which it directs towards you.  That’s how you will acquire la science du modelé.3

Such great works from such simple advice! The point is clear: Rodin’s sculptures are shaped by imagined inner energies that form outer surfaces. This is quite different from Michelangelo’s famous view that his works were conceived as figures trying to break free and be released from stone by his chisel. In Rodin, something more organic occurs – his forms are shaped by internal forces that are almost embryonic in their imagined growth. This has led to sculptures that are touchingly “rudimentary” in the sense that they are unfinished or seem to be expelled in an incomplete state. There is something “modern” and evocative about this characteristically unresolved state and it stands in stark contrast against the bold completeness of most of Michelangelo’s works. Michelangelo is complete and finished; Rodin is finished but incomplete. Both are magnificent but each artist, similar in so many ways, reflected and responded to different views of the desired effects of sculpture.

All these above observations bear upon and underline the significance of the present work.  Rodin’s La Femme accroupie shows a female figure crouching on a large rock-like plinth. The figure’s head turns to its right and such is its coiled energy at rest that it seems ready to make a panther-like leap. At the time, its “rawness” of posture and its animalistic aura would have seemed uncouth in that it lacks drawing room refinement. In fact, at the time some thought it reflected the shock of Charles Dickens’s book On the Origin of Species, which was published in 1859 some twenty-three years before Rodin’s creation. Today, none of this seems to matter and it illustrates how far Rodin reached beyond his own time and into our own. His was the world of Henri Bergson’s Vitalism, Nijinsky’s verve and Isadora Duncan’s idea of the free spirit. Rodin’s bronze sculpture La Femme accroupie bears all the hallmarks of that spirited age – that is why it holds pride of place in the collections of the Hirshhorn Museum in Washington, the Kröller-Müller Museum in Otterlo and the Fitzwilliam Museum at Cambridge University.