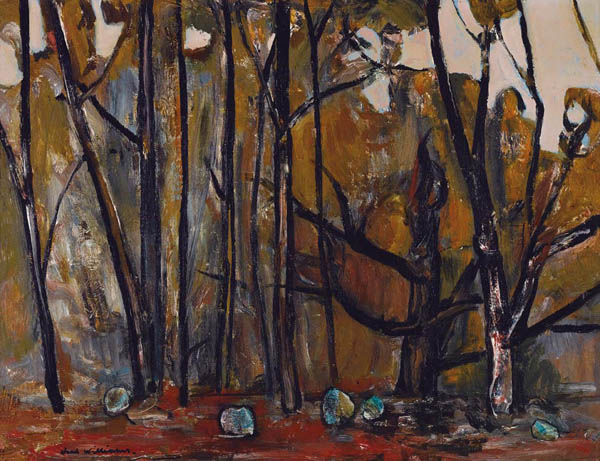 The story goes that when Fred Williams returned to Australia in 1956 after a five year period living and working in London, fellow artist John Brack (1920-1999) said to him ‘Well Freddy, what are you going to do?’ - to which he replied, ‘I’m going to paint the gum tree.’1 Despite Brack’s initial protestations that perhaps that wasn’t the most original choice of subject, the gum tree became an enduring motif within the distinctive pictorial language that Fred Williams went on to develop. Indeed, so original was his contribution to Australian landscape painting that Williams is often credited with changing the way we view the landscape itself through the lens of his singular vision.

This painting was created when Williams was still in a period of development and experimentation, on the cusp of the artistic maturity he reached in the 1960s. Bayswater Landscape was exhibited at his solo exhibition at Australian Galleries in May 1959, yet its provenance is unique, having been acquired directly from the artist by Kenneth Baulch, who was a personal friend of Williams. Baulch had made the long sea passage from Australia to England with Williams, Harry Rosengrave (1899-1986) and Ian Armstrong (1923-2005) in 1952, and was to remain life-long friends with all three artists. According to his Estate, Baulch purchased the present work and an etching (a medium in which Williams was also to achieve renown) for the princely sum of £10, with the intention of gifting it to a friend. However, no doubt swayed by the quality of the painting, he decided to keep it and gift the print instead.

After Williams returned to Melbourne, he lived with his mother and stepfather from 1957 to 1961, with a city studio in Exhibition Street. During this time he would often stay with Nance and Martyn Foster in Sherbrooke in the Dandenong Ranges, and use the opportunity to make plein air gouache studies to be developed into oil paintings back in the studio.2 The Bayswater suburb of Melbourne is less than 20km from Sherbrooke; thus the present work was quite possibly the result of one of the artist’s visits to the home of the Fosters, and his creative forays in the Dandenongs region and beyond.

In Bayswater Landscape we see Williams’ characteristic method of reducing the physical world to its essential shapes, planes and forms. During this period he was strongly informed by the cubism of Georges Braque (1882-1963) and the way Paul Cézanne
(1839-1906) described the landscape through geometricised forms. Williams’ painting of 1958 The Nattai River strongly shows the influence of Cézanne, and was his first work acquired by a public collection when the National Gallery of Victoria purchased it that year. The present work is less overtly informed by past masters; rather, it sees Williams closer to artistic maturity and his now iconic individual style.

In Bayswater Landscape the strong verticals of gum trees dissect the picture plane. At their base are green circular forms that could refer to boulders, or perhaps small shrubs. With foliage rendered as flat generalised fields of earthy green between and around the strong dark trunks, a shallow rendition of space prevails. Colour is localised to the bushland subject, as stated by Bernard Smith:

‘Williams seems to have taken up the problem of Australian landscape painting where Tom Roberts left off in the 1920s… He uses a palette which has long been associated with the Australian landscape: ochres, russets, pale olive greens, pale blues, and dull brick-reds. His surfaces are rich and opulent, varying from transparent stains to creamy impastoed accents…’3

Yet unlike the work of Tom Roberts and the Heidelberg School, Williams traversed a liminal zone between abstraction and representational art, absorbing lessons from both modes of art making. The present work reveals his great command of the formal properties of art, which even during this period of development underpinned his burgeoning reinvention of the Australian landscape.