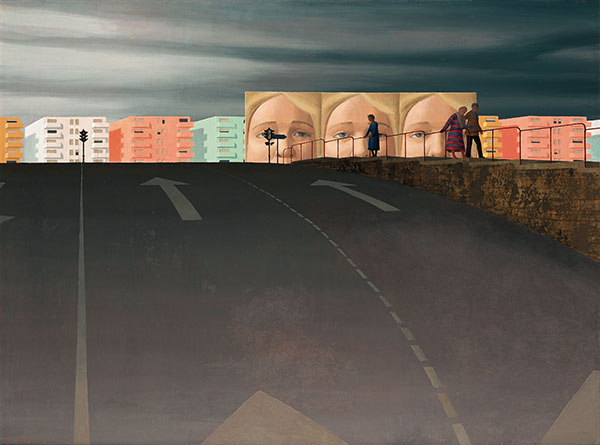 By Timothy Abdallah BA in Blog
Lot:
The Billboards II

1969, and Jeffrey Smart is at the height of his powers as an artist and fully in possession of a style of painting that is both instantly recognisable and the perfect vehicle for his highly individualistic Weltanschauung. The city and its geometries, both ancient and modern, grand and banal are the laboratory for his work and the site where he exercises the ideas that come about from his own experience and through his investigation and exploration of art.

Having lived and worked outside Australia since 1963, and having attained a degree of financial security, Smart allowed himself to give serious thought to making a permanent home in Italy. By 1971 he had completed the purchase of an old farmhouse, ‘Posticcia Nuova’ not far from Arezzo, in the heart of the Tuscan countryside, about one and a quarter hour’s drive south of Florence. The choice of Arezzo would have come as no surprise to Smart’s acquaintances as it is a name that is forever associated with the great Italian Renaissance painter, Piero della Francesca (c.1415-1492). Piero was a native of Borgo Santo Sepolcro, a short half-hour’s drive from Smart’s new home and his The Legend of the True Cross - an elaborate fresco cycle - could be viewed in the church of San Francesco in Arezzo itself. A further hour’s drive west was Urbino, the seat of Piero’s greatest patron, Duke Federico da Montefeltro where Smart could see Piero’s The Flagellation of Christ, a painting rated by Kenneth Clark as one of the 10 best paintings in the world, and the best small painting in the world.

Throughout Smart’s long career we find direct references to well-known works by Piero and a basic familiarity with Piero’s work is useful to anyone who takes an interest in his work.  Smart almost completely adopted the philosophy behind the famous Flagellation, in particular where the ostensible subject of the painting is pushed into the background by three enigmatic and exotically dressed figures to the right. This might be the most controversial figure group in the entire history of art, but it performs much of the work of generating the intellectual mass and intrigue that this painting possesses. From Arezzo Smart drew inspiration and direct references from the Renaissance masters a short distance from his home as well as further afield.

Smart had for some time been in the habit of travelling. In 1968-69, for example, as he worked on The Billboards II he visited Sicily in April, Munich in July and then Bayreuth for the Wagner festival. He also found the time to exhibit in Rome, his first Italian solo show at Galleria 88. In January he was in London, then New York, and in September in Sydney for a show at Macquarie Galleries. In October he was in Greece and he spent Christmas in Austria.

Wherever he travelled, Smart visited exhibitions, concerts and museums, but it was often on the way to these places, at stations, airports, and on the Autobahns of Europe that he found the subjects of his paintings. On returning to his studio he would unpack a bag of ideas and motifs and get to work combining his deep study of European art with the flash of inspiration from a truck stop, a group of workmen, or a curious bridge.

Smart also engages in a dialogue with contemporary art, and his own paintings often contain wry commentary on its latest developments. Having undergone a crisis of confidence about the direction of his own art earlier in his career, Smart now, as a mature, seasoned and well credentialled practitioner, cultivated a reactionary disposition vis à vis the avant garde which did not preclude his exploiting parts of it for his own use. Smart himself doubtlessly relished the irony that his inverted homages to contemporary art would become one of the consistent drivers of his own innovation. Typically he was happy to raid the larder of some of the more outre things he had seen with the result that, for example, a truck with a tarpaulin could become his very own Christo (1935-2020) ‘wrapped monument’.

Smart got into the habit of putting his ideas to the test in way that recalls his countrymen Arthur Boyd (1920-1999), John Perceval (1923-2000) and especially Sidney Nolan (1917-1992), each of whom accumulated an inventory of visual motifs that could be deployed at will alone, in combination or as a touchstone. In The Billboards II we see a painting which divides into several sections: the lower road; a central band of buildings, which in contrast to the larger section below it contains numerous changes in texture, colour and detail; and then the top section of sky, in contrast to the geometries of the road, is organic and amorphous. We enter the picture rather like a driver in a car. While the road arrows draw the viewer into the composition in a fairly definitive manner, the crest of the road implies a further movement to the left at the point where we encounter the apartment buildings, and yet this movement is arrested by the three faces on the advertising hoarding placed at exactly the spot where the leftward momentum threatens to misdirect the viewer out of the painting. The diminutive figures to the right support this effort, and they are in turn balanced by a couple of traffic lights to the left. An especially neat and very characteristic touch is the road line-marking to the left which through a trick of optics contradicts the curvature of the road to become a completely straight perspectival line that metamorphosizes and terminates in the traffic signal. Smart delighted in this sort of device: unobtrusive and yet capable of leveraging the entire weight of the composition with just a discrete little gadget. With the gay band of brutalist apartments proceeding along the horizon providing offbeat colour, the whole composition is kept under control by the sky, which keeps a lid on it all.  Essentially the painting achieves its dynamic from the restless movement about it caused by the arrows and rhythms and expanses and details and textures and light and shade. By inserting finely worked elements, such as the filigree railing and the figures moving in a direction opposite to the driver, Smart can make adjustments to the composition rather like a clockmaker uses counterweights to balance a movement.

The billboards featuring the triple repetition of faces are typically for Smart a combination of ‘main subject’ and red herring. In the zig zag of the compositional pinball machine he has constructed, the three faces perform a blocking function. They refer the viewer back to himself and they achieve this by the direction of their gaze, and by simply being odd. They exist by dint of the artist’s authority only, and represent within a fairly conventional composition a significant variation of texture and detail, whose effect moderated by the simple act of repetition.

The Billboards II contains no clues as to its purpose. For Smart a painting was a puzzle that needed to be firstly set and then solved. The tools he used to perform his acrobatics were his usual deadpan style, a strict geometric framework, and an idea, or theme to express it while asking a viewer to engage with the work by joining the quest. The resulting paintings, highly sophisticated, multi-dimensional designs, with rigorous application of principals (the golden section), art-historical references as well as commentary on contemporary art were dressed in irony.  The principal strand of which is that paintings of such complication should be dressed in such banal sheep’s clothing.

It’s widely known that Smart did not like to discuss his work. He was often asked and remained silent, knowing that the subtleties and arcane references would not stand up to being articulated by any means as well as by the paintings themselves. And so a viewer is let loose to formulate an interpretation, with the curious result that it might or might not correspond to the one formulated by the Smart. This dynamic is surely part of Smart’s intention and should be kept in mind whenever we look at his work.

The flair which characterises his very best paintings is prodigiously on display in The Billboards II and the work is a significant contributor to Smart’s reputation as one of Australia’s best-loved artists.