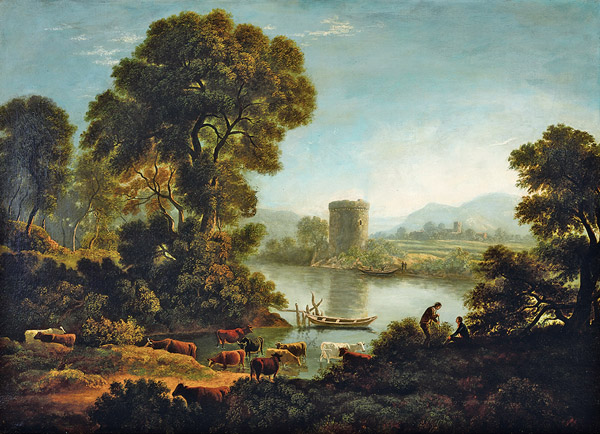 John Glover migrated to Australia from England as a free colonist in 1831 at the age of 64. He was a self-taught artist who is viewed as one of Australia’s finest colonial painters and the country’s first great landscape painter. Before leaving England for Australia, he already had a deep fondness for the natural environment. As the youngest son of a farmer, he spent his childhood sketching birds and animals from the local farmlands near Leicester. Glover’s artistic talent evolved after making a living from his calligraphic ability as a writing master at the local school. From here, he went on to experiment with watercolours and oils. Eventually, Glover moved to Litchfield and began touring the surrounding districts making sketches and small paintings of his travels. Between 1795 and 1804 he had exhibited his work across England, Scotland and Wales.

Glover settled with his family in London in 1804 after becoming a foundation member of the Society of Painters in Water Colours (later the Royal Watercolour Society). During this time, the artist worked as a teacher and found his interest in oil paint grew as he and his students experimented with different media and techniques. The Society eventually split due to an unresolved issue of allowing oils in its exhibitions. Soon after, Glover became a member of the newly-formed Society of Painters in Oil and Watercolour. After travelling through Europe and exhibiting his work there, Glover returned to London and opened his own permanent exhibition at 16 Old Bond Street.

The artist and his family were able to live comfortably from his earnings which allowed Glover to travel extensively and discover picturesque landscapes which were recorded in his meticulously detailed style. As art historian Bernard Smith notes, Glover diligently worked to perfect his technique: ‘he constantly strove to perfect foliage, the subtle effects of light, mist and atmosphere.’1 Glover frequently visited Wales during this period. The country’s spectacular mountain ranges and jagged coastlines provided the artist with a rich variety of natural scenery, in addition to the many homes, castles and ruins which populated the Welsh districts. Welsh Landscape bears all the hallmarks of a master landscape painter. The influence of earlier French painters such as Claude Lorrain (c1600-1682) and Nicholas Poussin (1594-1665) are evident here, however Glover perfected his own individual style, which was characterised by a highly intricate and atmospheric approach to landscape.