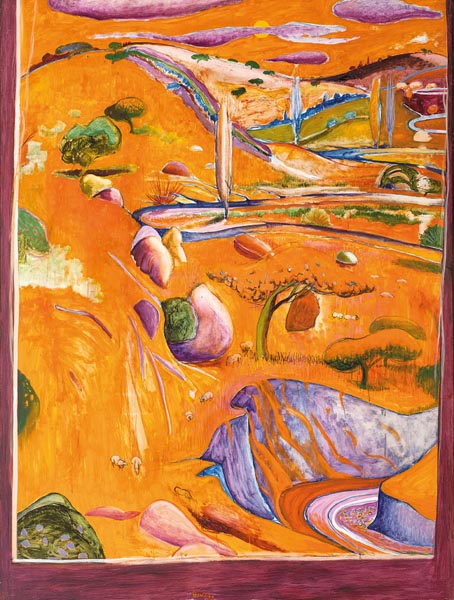 By Ken Wach in Blog
Lot:
The Paddock - Late Afternoon

Brett Whiteley’s tour de force painting The Paddock - Late Afternoon of 1979 shows the then forty-year old Sydney artist at his most colouristically luminous – only rarely did he ever attain, even in part, the suffused effects of this optically striking painting.

This visually lush canvas is part of a very limited few that arose from a type of artistic “meditation” on a particular area of Australia’s rural landscape - specifically near the Fish River in the Oberon region, about 180 kilometres inland from Sydney. The present painting reveals the artist not only giving “voice” to an almost fevered identification with this specific landscape but also displaying his observational and painterly skills in capturing the chromatic intensity of its almost shadow-less vista.

The painting’s sparsely shadowed scene reveals a compositional secret. Oddly enough the sun is shown setting in the centre of the upper register of the painting as though it is displayed as looking down upon the scene rather than shining down upon it. Given this, and the position of shadows, there is little doubt that Whiteley painted the highly lit scene with the sun above and later added the central sun as a focal device to “balance” the composition and give it an underlying pyramidal format. As a result, the painting’s vertical scroll-like landscape scene seems to “hang” before the viewers’ eyes like an unfurled tapestry whose riveting visual power owes its impact to an upward visual sweep and to the skillful use of the variations of just three colours: orange, magenta and green.

In this sense, Whiteley’s The Paddock - Late Afternoon of 1979 may be instructively considered as a “meditation” – a type of spun-out creation woven with a very limited palette of colours most probably suggested by the intensity of its centrally placed Illawarra Flame Tree (Kurrajong). This colouristic simplification, this focus upon and escalation of a single element, is not entirely unlike the restricted formats found in a Bach fugue or skilled guitar riff in music, each of which owe their attention-grabbing power to repetitive motifs and simple variations, each of them “colourful” in their own ways. In essence, the power
of Whiteley's painting rests upon his highly adept use of
visual amplification.

Such is its power that, once recognised, this creative technique becomes clear from even a cursory glance at the painting’s sumptuously tinted surface. However, it becomes abundantly clear when one views and compares Whiteley’s companion work of the same year. His very closely related painting, The Paddock - Early Morning (sold by Deutscher~Menzies in September 2004 for $647,000 (including buyer’s premium)), shows the same landscape viewed from a different vantage point and at a different time of day. There is something of Claude Monet (1840-1926) with his famous studies of haystacks and Notre Dame Cathedral in this process of artistically recording light effects and deftly displaying painterly effects. However, we must note that in Whiteley the end result is not a façade-like study of passing light and changing light effects; it is conditioned by a connected love of the locality and the flashing vivacity of his very own highly individualistic colour contrasts and amplifications.

In Monet, Nature’s wondrous light effects are the be-all and end-all; whereas, in Whiteley they serve as the beginning of something that becomes transformed, where Nature’s effects and colours are ”electrified” and energized by a neon-like intensity. Monet’s work hums; Whiteley’s buzzes. Monet’s work is lit; Whiteley’s is charged.

There is more that warrants note. Even a scanning glimpse confirms that Whiteley’s two equally sized and closely related paintings, The Paddock - Late Afternoon and The Paddock - Early Morning, of 1979 demonstrate the artist’s accomplished use of a wide span of pictorial effects. The early morning work is highly restrained; its colours are muted; its mood is restful and serene and its pictorial forms droop and flow as though still drowsy at Dawn. By contrast, the present late afternoon painting is animated; its colours are vibrant; its mood is active and its forms are alert and bursting with life. One is languorous, the other alive – as though the landscape before him has woken from sleep.

Furthermore, it must be said that there is always something humanoid and anthropomorphised about Whiteley’s conception of the Australian landscape. He seemed to have considered it as a living organism that heaved with life; that proudly wore its lived-in features and bore its scars bravely. Certainly, many of these associations are due to the role of the much-admired Sydney artist Lloyd Rees (1895-1988) who often revealed a pantheistic appreciation of Nature.

However, despite this, in Whiteley there are some features that point to an alternative cultural source that remained absent in the works of Rees. Whiteley had, at the time, become attracted to the visual features and aesthetic aims of Oriental art. Of course, Whiteley was an observational magpie - he had an acute “eye” in that he so often noticed that which went unnoticed by others. Chinese vases, Japanese prints, screens, calligraphy, kimono fabrics, bas-reliefs on bronzes - all these varied elements widened his artistic “vocabulary” and honed his visual literacy.

Importantly, Whiteley emulated, not imitated, an Oriental mode of sensing and seeing that heightened sensation and appreciation. For well over a century, as Paul Gauguin (1848-1903) well knew, Sydney was considered to be the centre of the Pacific area, so it is entirely appropriate that one of Sydney’s most accomplished sons should also turn his artistic attention in a subtly Orientalised direction. Very few Australian artists since the remarkable Ian Fairweather (1891-1974) have done quite the same, quite as well.

Whiteley’s emulation of an Oriental “mode” is evident not only in the vertical scroll-like format of The Paddock - Late Afternoon, but also in its asymmetrically arranged patterning – one that stresses flatness and “edge-to-edge” visual interest (Whiteley often called paintings like this “Chinese” works). The painting displays no spatial perspective, no illusion of depth and no central field of focus – all is lost in a flush of colour. This is especially noticed in the sky of the present painting. It is painted in a persimmon orange with magenta-lavender clouds. Whiteley’s aim here was to prevent a naturalistic reading of the landscape so that the painting’s planar unity – its screen-like quality - was not disturbed.

Two other comparable paintings highlight the unique aesthetic qualities of Whiteley’s The Paddock - Late Afternoon of 1979. His Baudelaire’s Drive of 1975 shows an earlier version of a similar composition – it lacks the vibrant colour of the present work, but it throws pictorial emphasis upon the meandering river in the landscape to the point that its sinuous form lends it almost human associations. This is all the more apparent in Whiteley’s The River at Marulan (…Reading Einstein’s Geography) of 1976 where the same sinuous forms lend life to the landscape, here seen with the faintest hint of the image of the torso of a monk playing a flute in its lower central right section. Both of these works show Orientalised elements that lend an anthropomorphic cast to the paintings – these earlier related works serve to underscore the more resolved and more integrated aspects of the later Paddock - Late Afternoon – a work that ranks highly in the artist’s mid-career output.

Whiteley was a natural master of many artistic formats. One of his most characteristic pictorial formats is one where the scene is viewed slightly from above, since an elevated position helped to foreshorten his compositions and thus allowed more visual information to be funnelled into the picture plane. This may be first seen in Whiteley’s work as early as 1958 in his painting Sofala in the collection of the Art Gallery of New South Wales. This raised eye level is also quite clearly evident in The Paddock - Late Afternoon of 1979, which shows the artist at his visually compacted best his forms seemed “piled-up” and its winding road curls up the painting compressing distance in a horizon-less semi-blurred flow of colours. These factors give the present painting a tightly packed appearance that accentuates its crammed and almost pulsing complementary colours.

Whiteley’s The Paddock - Late Afternoon of 1979 is also unique in another important regard. It is a painting of a painting. It shows a Whiteley landscape painting leaning against a wall in his studio, which in turn becomes the subject of the extended format of the present painting. In this sense it is conferred with a deeper visual interest, since it is released from any over-arching realistic purpose – it seems more “painterly”. In some sense this is not unlike the content of Federico Fellini’s movie 8½, which is a film about a film – it seems more “filmic” and self-reflexive.1 This allowed Whiteley to “interleave” and elaborate upon the scene.

This new “once removed” aesthetic coupling gives Whiteley’s painting immense visual appeal. The subject of the painting is a visual correlative of the actual painting and the interplay of its two formative elements is both visually enticing and intellectually intriguing. This is new in Whiteley and most probably sourced most directly from his favourite artist Francis Bacon (1909-1992), even though this pictorial attribute occurs in the works of Pablo Picasso (1881-1973), Giorgio de Chirico (1888-1978), Paul Nash (1889-1946), Roy de Maistre (1894-1968) and others.

Another feature that warrants attention is how subtly Whiteley confers humanoid shapes upon the landscape – in this case the landscape of the area “exactly 11 kms South of Oberon on the Goulburn Road. The Fish River winds its way through the middle” … with … “intermittent strewn granite boulders, some as big as houses, mostly the size of a small car that gives the dramatic feeling of a Zen garden”.2 Painted partly en plein air and partly recollected from memory, Whiteley’s The Paddock - Late Afternoon, relies upon a linked connection between the human body and the “body” of the Oberon landscape. The landscape rolls and heaves with the almost palpable plumpness of human flesh. Considered in these ways, this painting is a precursor of the more distinct anthropomorphism of Whiteley’s magisterial painting The Olgas for Ernest Giles, (also known as To Ernest Giles) of 1985, which is the most expansive example of his corporeal linkages. Both paintings bracket off Whiteley’s grasp of the pictorial potential of the Australian landscape and give some idea of his distinctive ability to both recast and reformat its more idiosyncratic attributes.

There is no “message” in The Paddock - Late Afternoon; it simply re-configures and celebrates the perceived beauties of a certain aspect of a certain area of a local landscape. Overall, the present painting is a significant, rare and highly accomplished example of Whiteley at his most refined.

A lot coalesces in this seductive painting: opulent colour, simplified composition, free paint handling and opulent calm sensation. Whiteley’s is a unique and justifiably famous talent. The present painting presents him at his best. The total effect of Whiteley’s The Paddock - Late Afternoon of 1979 is enlivened by the combination of a sophisticated and restrained composition with a luxurious visual sumptuousness.

There never was an artist quite like Whiteley and, of course, there never will be again. Whiteley’s free and potent paintings can now be seen as aesthetic markers of that heady time when Sydney, that effervescent Babylon of a city, was the bustling centre of everything that mattered in Australia. Whiteley was, at that time and in that place, Sydney’s artistic mascot.

1. This is quite different from paintings that contain incidental images of paintings in the picture plane; famously such as Velasquez, et. al.
2. Brett Whiteley: unposted letter to his mother; posthumously discovered 5 February 1980. Cited in Wilson, G., Rivers and Rocks, Arthur Boyd and Brett Whiteley, Bundanon Trust, West Cambewarra, NSW, 2001, pp.40-42

(I wish to acknowledge the kind assistance of Robin Gibson, Director of the Robin Gibson Gallery in Darlinghurst, Sydney, with the research for this essay)