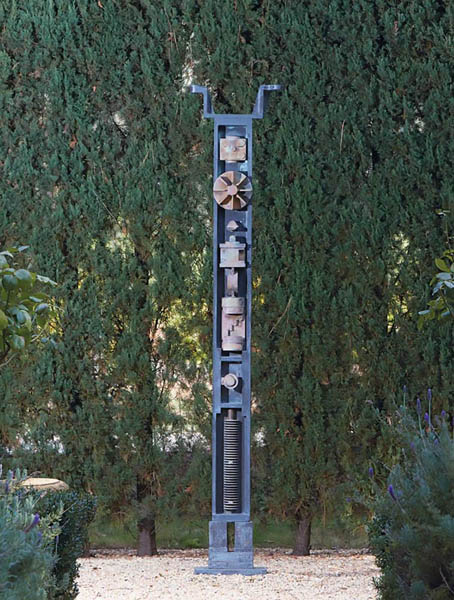 Robert Klippel’s much-quoted mantra ‘make it new’ encapsulates his life-long view that Modern art had to create rather than recreate. For him, true creativity meant going beyond Nature. For Klippel, this was the crux of Modernism - the creation of new man-made additions to Nature.

Perhaps nowhere is the success of such an appositional tussle more aesthetically evident than in his Federal Government funded public sculpture commission for the opening of the National Gallery of Australia in Canberra. Her Majesty Queen Elizabeth II formally inaugurated the gallery on 12 October, 1982.

Klippel’s sculpture commission led to the creation of a group of eight bronze cast works that stand in a garden pond within the National Gallery of Australia in Canberra. The present bronze sculpture, Klippel’s Opus 372, is one in a very limited edition
of these.

Klippel was commissioned by James Mollison, the far-sighted founding Director of the National Gallery of Australia, and in 1981 the Group of Eight, as the cast bronze artworks came to be called, was initially constructed from sections of pre-fabricated wooden pattern parts that the artist had found in 1964 and stored away for the next seventeen years.

Klippel’s development from wood assemblage to bronze cast sculpture during the early to late Eighties extended the parameters of reuse and recycling to an artistic form of “upcycling” – where found and pre-fabricated objects are technically remade and materially transmuted. Bronze casting allowed Klippel to ‘push’ assemblage toward a new architectonic unity. Klippel’s Group of Eight ‘modified’ assemblage sculptures were cast in bronze by Peter Morley at his Meridian Foundry in Melbourne and installed as artist’s proofs, from a proposed edition of six, in the garden pond of the NGA Sculpture Park between July and October 1982 (Nos: 365, 366, 367, 368, 369, 370, 371 and 372 – the present work). These were Klippel’s first major bronze cast sculptures.
Klippel’s Group of Eight sculptures of 1982 possess both assured “objecthood” and affirmed autonomy. These two rare and almost totemic attributes give them their reinforcing spatial “presence” and stately “dignity”. Klippel’s Opus 372 possesses a towering sentinel-like structure that employs verticality as an artistic format. It rises from a horizontal plane and emphasizes compositional cohesion by emphasizing the vertical visual progression of various cross sectioned parts of mechanical components. The sculpture’s industrial elements and mechanical components, loosed from their once functional purposes, are reconfigured purely through the artist’s recognition and physical manipulation of their interrelated visual properties. Their vertically arranged restructured surfaces, shapes and shadows build up coherent visual progressions of abstract forms that compose aesthetically viable sculptural entities. The sculpture’s visual and material unity conveys a sense of sculptural “objecthood”. What the viewer sees is a “conversation” of sculptural forms. In this formal compositional sense, the present sculpture is very closely related to similar large “sentinel-form” bronze works in the Lowenstein Collection and the LaTrobe University Collection in Melbourne.
Klippel’s bronze Opus 372 of 1981 has something of the solemnity of primitive carved burial posts, the stasis and ‘visual weight’ of totems and, overall, the demeanour of an almost pharaonic regality. The artist and writer James Gleeson, Klippel’s close life-long friend, shared the spirit of these observations when he described the Group of Eight series of sculptures, to which the present sculpture belongs, as having an ‘archaic gravity’- the series is unique in his fifty-five year artistic output.

Klippel’s “up-cycled” bronze sculptures of 1981-1982 are an aesthetic culmination of three years of experimentation with the sculptural potential of columnar structures. He had refined the compositions of his bronze cast assemblage sculptures to emphasize a central sense of solemn almost meditative composure; that is, the type of composure that suggests the ability of any one of them to stand in an easy relationship with its environment - in fact, with almost any environment.