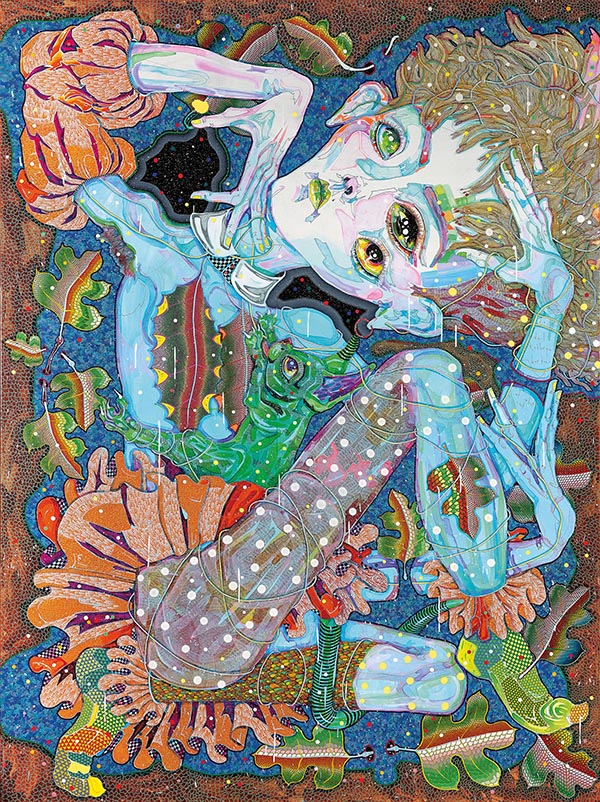 By Corinna Cullen BA MA Art History and Curatorial Studies in Blog
Lot:
At What Cost

…‘I have always found paradox and contradiction to hold a lot of truth and comfort for me.’
Del Kathryn Barton1

The award-winning artist Del Kathryn Barton is now such a force in contemporary Australian art that she could almost create her own weather. By foregrounding women’s bodies, the complexity of their desires, and the emotional labour that is demanded of women (labour that is often overlooked as trivial or commonplace), Barton has successfully delineated a place for herself in Australian art history. What makes Barton’s work superlative is her skill as a draughtswoman, the authenticity of her unusual vision and her commitment to it.

The one woman in ten living artists who currently command the highest prices in the Australian art market,2 Barton’s CV is a roll call of aspiring artists’ dreams. Her career has included: more than twenty solo exhibitions (both national and international) culminating in a survey exhibition at the National Gallery of Victoria over the summer of 2017-18; two Archibald Prize winning portraits in 2008 and 2013, the first of which announced her as a bright fresh voice in Australian contemporary life; successful cross-disciplinary forays into filmmaking and fashion, working with luminaries such as Australian actress Cate Blanchett and Australian fashion house Romance was Born; and finally, the acquisition of her works for the National Gallery and major state and regional galleries through Australia.

Barton’s first Archibald Prize-winning portrait can be read as a manifesto of her practice3, and a key to her later works. You Are What Is Most Beautiful About Me, A Self-portrait with Kell and Arella depicts the artist with her son and daughter. Julie Ewington, author of a comprehensive survey of Barton’s work puts it like this:

...Barton’s portrait made a very particular claim: it announced the arrival of an artistic personality who insisted on the recognition of the breadth of her life, not only as an artist who must hereinafter be respected – which is the distinction that the Archibald Prize confers in Sydney’s broad cultural life – but as a mother whose children are manifestly central to her life, and as a woman resolutely affiliated with a style of visual abundance usually associated with women’s amateur domestic handicrafts.4

This auspicious entry into national consciousness is worth considering when viewing the present work, created 10 years later. Barton has always drawn on the experience of being a woman in our world: her output can be mapped onto milestones of learning to inhabit a woman’s body; of awakening sexuality; of becoming a mother; and the frustrations arising from the expectations placed on women. It is not a stretch to read into At What Cost the inevitable toll taken by the act of child-bearing and rearing, and the chafing constraints of even a loving and supportive domestic partnership.

At What Cost was exhibited at the Miami Art Fair UNTITLED 2018, as a part of the artist’s solo booth for New York based gallery Albertz Benda. The installation shows the present work facing off against another large portrait work titled The Fever is Here. These are supported by a series of smaller portraits of ‘child beasts’ set against a wall of eyes like a ‘surrealist cubby house’, to use the artist’s own description.5 The larger works read as parental companions to the smaller paintings, emphasising maternal themes. Notably, these works were joined on display by a sculpture, Up In This 2012, an erect penis embraced by a large red back spider, upon which is perched a tiny monopoly style house; as well as a screening of RED, Barton’s exploration of female sexuality starring Cate Blanchett as the avatar of a female red-back spider who consumes her mate after sex. Barton has said ‘RED is a roar. It’s like, WOMAN is fucking fierce, we’re fucking fierce and we’re fucking awesome. Our power is hard to both define and contain!’6

Contributing to this complex conversation of domestic power struggles At What Cost provides a gentler meditation. A draughtswoman by nature, Barton's elaborately detailed and sumptuous paintings are created on the basis of her linework; painstakingly layered with decorative motifs, dotting, and washes of colour, all coexisting with permutations of the natural world immaculately rendered. Examples of her style can be seen in the related works illustrated here: To Look At Your Hands 2012, and Openly Song 2014 sold at auction with Menzies in February 2020. The present work contains all the hallmarks of Barton’s successful large-scale works: expressive drawing, exquisite detailing and rich colour. A superhuman being accompanied by her animal familiar. Allow the eye to rest on any one portion of the canvas and it will find a world within a world.

Stylistically Barton’s work builds on the heritage left by Symbolist Gustav Klimt (1862-1918), and that of Klimt’s protégé, early Expressionist Egon Schiele (1890-1918), both acknowledged influences.7 At What Cost uses a recognisably Klimt-like composition; the subject a flat perspectival plane, the background dense and alive with detail. Traces of Schiele’s attenuated fingers and androgynous facial features can be found in the figure. It is however, the inspiration of Louise Bourgeois (1911-2010) and Kiki Smith (born 1954), women artists ‘pursuing idiosyncratic and personal visions’8 that sing out from Barton’s paintings - demonstrated, to use Barton’s words, ‘by the heightened, idealised she-beasts that I give birth to in my work’.9

The lady monster of At What Cost is literally boxed in by the picture frame; almost, but not quite pressing against the sides. Where previous heroines have dominated and floated in their compositions, the figure in the present work is crouched, folded in on herself, her head tilted at an awkward angle in order to fit.  She appears to be at once still and in motion, her many eyes and hands indicating a multiplicity of action and observation.

Unusually, the subject’s breasts are covered by two large autumn leaves, very like lungs, as if she were reduced or confined to simply breathing. Breasts are obvious signifiers of sexual pleasure and maternal utility. This is particularly so in Barton’s work, with many of Barton’s figures sporting multiple breasts.10 The lack here seems indicative of a general recession from those roles. She is also cuffed and collared at the neck and ankles, a restriction that bears traces of commedia dell’arte costuming, adding a clown-like aspect to this buttoning down of sensuality. This costuming is prefaced in To Look At Your Hands 2012, the performative elements in this painting emphasised by the trapeze-like umbilical cord upon which the subject swings.

At What Cost is distinctly autumnal, with jewel tones of russet, orange, hazel and emerald green employed across the canvas. Autumn is associated with ideas of cooling and shedding, of ageing, and of change itself, concepts that are easily extrapolated to melancholic or tempestuous emotions. Barton uses colour knowingly in all her works, believing that it can carry ‘life affirming significance’.11

Ultimately, Barton’s painting refuses to fully disclose its meaning, handing responsibility for interpretation over to the viewer. This is where Barton’s genius resides, to stuff her work full of meaning and beauty, but allow open discussion and criticism to flourish. Ambivalence is real. People do love their families and rage against them. Desire, fulfilment and stability are not always complementary. Barton allows the contradictions, complexities and desires of womanhood to be voiced, without judgement, to push us forward into a world where all selves and versions of selves might co-exist.