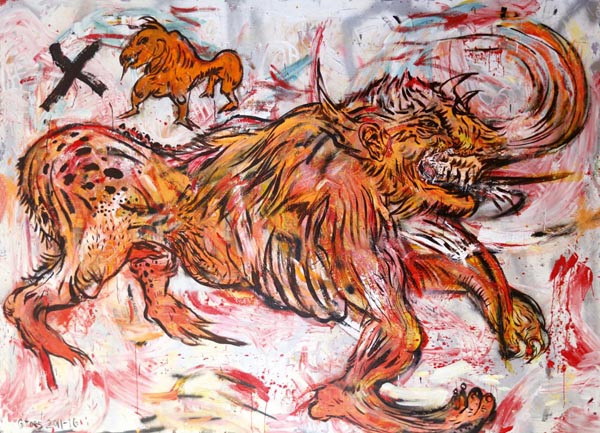 By Gavin Fry in Blog
Lot:
The Beast

For more than fifty years George Gittoes has carved out a unique place for himself in Australian art. He has gone where few would dare to travel, both physically and artistically, as a champion of peace in a troubled world. He was awarded the Sydney Peace Prize in 2016 for his long battles against intolerance and injustice in Afghanistan and has been awarded the Sulman and Blake Prizes for his art. The scope of Gittoes’ art is as all-encompassing as his journeys around the globe. As a young artist he quickly broke free of the conventional life, working in puppetry, performance art, street theatre, psychadelic and op art, as well as documentary and experimental film before developing a reputation as a social realist painter and printmaker.

From the Yellow House of the early 1970s, working alongside Martin Sharp (1942-2013), Peter Kingston (born 1943), Greg Weight (born 1946) and Bruce Goold (born 1948), he quickly developed his role as an energetic commentator on the world around him. The conflict in Vietnam became an obvious target and he produced a series of powerfully symbolic anti-war paintings and prints. He developed both his technical skills and his acute social conscience in a series of works based on the experience of workers in Australian heavy industry. Travelling to the mines and steel works of Broken Hill, Newcastle, Whyalla and Wollongong, he worked underground and in the heat of the blast furnace, painting, drawing and taking photographs which have become, in the case of the now lost Newcastle works, a lasting and important monument to the industrial workforce. That series in turn led to work in places as far removed as the Philippines and Nicaragua, at first independently, but later alongside Australian peacekeepers.

Working in Cambodia, Lebanon, Somalia and the Western Sahara he came to see very different conflicts to those of his predecessors in the two World Wars. He was witness to the myriad of small vicious conflicts, the civil wars and insurgencies, which pitted neighbours against each other and turned suburban streets into battlegrounds. Gittoes developed a powerful method of artistic reportage, producing drawings in pencil augmented by photographs and a written narrative that flowed into the imagery. Back home in the studio, the drawings fed into a series of immensely powerful and disturbing paintings, wrenched from the canvas by the artist’s bare hands. This work reached a crescendo in 1995 when he was witness to the Rwandan Genocide, one of the most horrific moments in modern human history. The works he made, literally surrounded by the dead and dying, the blood and stench of a hand-to-hand massacre, became a rallying point for action on behalf of a forgotten people. His painting of The Preacher won the Blake Prize that year and, twenty years on, the images still raise pity and anger.

After Rwanda, instead of retreating from the horror of war, Gittoes has followed the trail of trouble from Northern Ireland to Bosnia, on to Iraq and now to Afghanistan. He has made films documenting the lives of those living under the Taliban and produced a series of paintings that express symbolically the evils visited on so many helpless civilians. Rather than producing work just for consumption in the west, George and his partner Hellen Rose work on the ground in Jalalabad, helping the people make their own art, music and films in defiance of the Taliban’s decrees. The monsters he gave face to in the Vietnam years have returned, bigger and more horrific than before. His images have grown in scale and the physicality of the work is a reflection of the power he confronts. At times the mere depiction of an event is not enough, and the artist must produce a work that physically embodies the very idea of evil. Such a work is The Beast, an extraordinary symbol of that which confronts the artist every day as he works, through his art, to bring light and joy to a people so desperately in need.