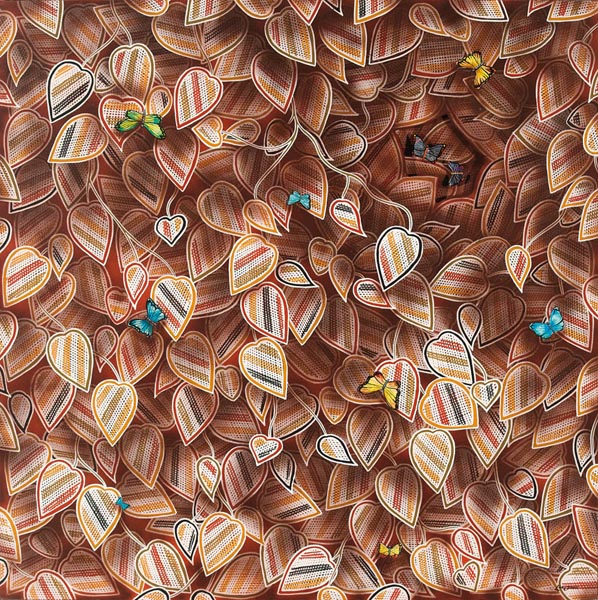 Described by the curator Margo Neale as a ‘cultural terrorist of gentle irreverence’,1 Onus, a self-taught artist of Yorta Yorta and Scottish descent, left school at the age of 14 and worked as a motor mechanic and spray painter before joining his father making artifacts for the tourist market. He began painting small landscapes in oil in 1974 and in the mid-1980s developed his characteristic fusion of photo-realism and indigenous imagery.

In 1986 Onus was introduced to the Garmerdi community at Maningrida and it was here the artist met Jack Wunuwun, who would become his adoptive father and mentor. The artist’s annual pilgrimages to the community provided him with his knowledge of symbols, patterns and designs from the community elders. Employing wit and irreverence to include rather than alienate viewers, Onus combined Aboriginal imagery and Western art practices to create a hybrid style that spoke across cultures, highlighting points of political and social importance and bridging the gap between his two ancestries. His art was at times harmonious, but at others more humorous, political and provocative. By using Western art forms combined with the life force of Aboriginal culture, he raised issues faced by both indigenous and white Australians.

One of the earliest themes Onus was introduced to was the butterfly dreaming. The present work, Bunpa (Butterfly) from 1989, is a significant transitional work, one of the earliest paintings in which Onus uses the butterfly theme. It is a subject which explores rebirth, freedom and liberation and was a theme he would continue to paint throughout his life. Here, Onus paints the butterflies directly onto the surface in bright colours - he cleverly uses shade and shadow to create the effect of three-dimensional relief layering. This effect is enhanced by the two butterflies constructed from CDs, painted and fixed onto a recessed area of the canvas. Through the use of these materials, Onus is juxtaposing contemporary society and its technological trappings against the cultural traditions of the Indigenous world.

‘I kind of hope that history may see me as some sort of bridge between cultures, between technology and ideas.’2 Onus was continually searching for ways to bring innovation to his work and his relief paintings demonstrate his ability to reinvent his artistic practice. The artist would introduce found objects such as feathers, bones, batteries and other household objects to create a third dimension onto his otherwise two-dimensional works. The relief paintings are an example of this ongoing attempt at reinvention and act as a link between his paintings and his great love of sculpture.

Bunpa is from an extremely rare group of works, only 6 or 7, created by the artist in this unique relief manner. The present works demonstrates the artist’s ability to combine artistic innovation with traditional indigenous culture while also displaying the exquisite detail characteristic of Onus’ most acclaimed and collectible works.