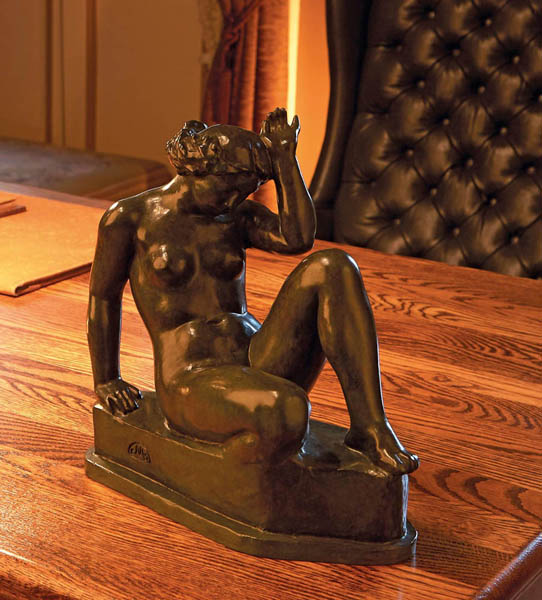 The French artist and writer, Maurice Denis (1870-1943) called Maillol a ‘primitive classic’. Looking at the simple geometry and timeless repose of La Montagne, you can sense what he meant. Maillol was one of the most important sculptors of the twentieth century and La Montagne is one of his most celebrated works, the culmination of a career devoted to allegorical renditions of the female nude. This work is a study for the monumental sculpture of 1937, an example of which, cast in lead, is held in the National Gallery of Australia’s sculpture garden in Canberra.

Maillol’s work was a response to the aesthetic ideals of Paul Gauguin (1848-1913) (who admired his work in return) and his contemporaries, the Nabi painters including Maurice Denis (1870-1943), Pierre Bonnard (1867-1947), Édouard Vuillard (1869-1940), Paul Sérusier (1864-1927) and Ker Xavier Roussel (1867-1944). Gauguin encouraged the group to return to the primitive roots of art, unspoilt by modern civilisation, himself working first in unspoilt Brittany then the South seas. The Nabis favoured bright colours and bold shapes, taking their art closer to abstraction. Their subject matter remained representational, symbolist in inspiration, and was design oriented along the lines of the Japanese prints they so admired. For Maillol and the Nabis, a ‘work of art is the end product and the visual expression of an artist’s synthesis of nature in personal aesthetic metaphors and symbols.’1

Maillol had initially studied as a painter, but with Gauguin’s encouragement he began to experiment in the decorative arts, taking up tapestry design and manufacture with notable success until eye strain turned him to sculpture in the 1890s. In 1902, the forty year old artist showed a series of mature female figures at his first exhibition at Ambroise Vollard’s gallery, establishing his reputation and signature model for the remainder of his career. The idea of the ‘synthetic’ espoused by the Nabis was realised by Maillol in naturalism without realistic detail in the surface of his work, unlike the agitated skin, tense musculature and spiral compositions of Auguste Rodin’s (1840-1917) figures. Maillol’s sculpture was characterised by harmonious forms, bold silhouette, decorative effect and clarity of surface and volume. He rarely used a twisting or shifting pose and there is little dynamic in the usually restful poses he employed and this study for La Montagne is no exception.

Rejecting the emotional sculpture of Rodin, Maillol aimed for a simplicity and serenity that evoked the ideals of Classical Greece and Rome. ‘The particular doesn’t interest me’, he said, ‘what matters to me is the general idea.’2 He wasn’t interested in literary or psychological references and his generalised figures emphasise form itself. For Maillol, stylistic innovations were less important than his realisation of a purity of form and creation of a reality independent of the tradition of realism. Abstract in its ideals, Maillol conceived form as a series of discrete volumes that integrate into a harmonious whole, an approached that inspired succeeding generations of sculptors.

In 1914 Maillol encountered hard times after his early successes. His association with the German Count Kessler, his major patron, was suspended. In 1913 Kessler had partnered Maillol in publishing a series of woodcuts and in manufacturing a special paper that Maillol himself designed.

The well-connected count warned Maillol to protect his sculpture just days before the war started and Maillol was suspected of being a spy. Soon after, the paper factory was burnt to the ground. Maillol, equally frightened and concerned by these events and for the safety of his only son, a flier during the war, did little work. After the Armistice, he was commissioned to make a series of large scale monuments to the fallen but was running out of steam by the mid thirties. It was then, in 1935, that he met Dina Vierny (1919-2009) his model for the last years of his life. Dina was only 15, Maillol was 73.

Vierny was the daughter of Russian émigrés who had fled the 1917 revolution and grew up mixing with artists and writers in Paris. She also posed for Matisse and Bonnard, was imprisoned for resistance activities during the war and went on to become an art dealer, collector and eventual founder of the Musée Maillol in Paris and manager of his estate supervising the production and editioning of his work. A friend of the family recommended she pose for Maillol because she resembled the typical Renoir or Maillol model. It was a highly successful partnership. Vierny’s son Bertrand Lorquin noted the influence of Dina on Maillol’s work at the end of his life, particularly La Montagne: ‘The appearance of this new model in Maillol’s life brought about a renewal of his art and gave him the impetus to create the monumental sculptures of his final years.’3

Dina posed for many drawings for Maillol before he commenced work on a commission from the Musée National d’Art Moderne for a monumental work in stone, La Montagne. Maillol made four different studies, the first in 1935 and the last in 1936 to finalise the composition. Maillol hoped to include the sculpture in the exhibition ‘Les Maîtres de l’Art Indépendant, 1895-1937’, to be held at the Petit Palais, Paris, during the Exposition Universelle in June 1937.4 The studies were cast in bronze and terracotta in editions of six plus two proofs (as was Maillol’s custom) after the war. The four studies are relatively similar to one another. One of the studies, considered the fourth and last as most complete in detail, is held in the collection of the National Gallery of Australia and was cast in bronze by the Valsuani Foundry. It is likely that this example, La Montagne, 1er état (petit modèle) cast by the Emile Godard Foundry, Paris, is an earlier variant. Emile Godard was the son of Désiré Godard, whose foundry Vollard used for casting work by his artists including sculpture by Maillol.

Like most of Maillol’s sculptures, La Montagne, 1er état (petit modèle) as much as its bigger sister, appears introspective and self-contained. The slightly melancholic air of the figure in this work is underscored by the simplicity and formal power of the pose: a stable geometry of a triangle formed by the bent leg within an overall square composition. Less sombre than the war memorials that preceded it, La Montagne, 1er état (petit modèle) maintains a sense of gravity. There is silence, but the gesture of the figure’s hand and her flowing hair suggest the flicker of a soft wind, an eternal beauty enduring the relentless flow of life.

Footnotes
1. As noted in Wikipedia, http://en.wikipedia.org/wiki/Les_Nabis
2. Carnduff Ritchie, A., Sculpture of the Twentieth Century, New York: Museum of Modern Art, p.39
3. Lorquin, B., Aristide Maillol, London, 1995, pp.138-140
4. A detailed account of the genesis of La Montagne is given in Lloyd, M., and Desmond, M., European and American Paintings and Sculptures 1870 - 1970 in the Collection of the Australian National Gallery, National Gallery of Australia, Canberra, 1992, pp.202-205