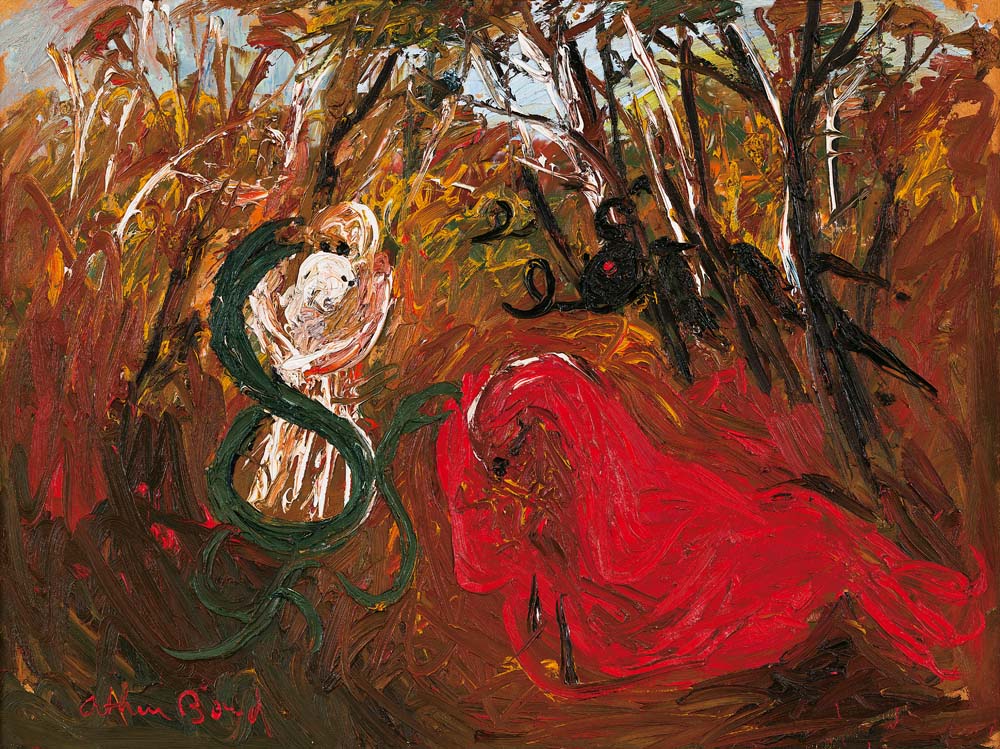 Arthur Boyd’s creative oeuvre covers a vast gamut of themes and stylistic developments; from naturalistic landscapes, to allegorical works charged with potent expressive symbolism. Boyd’s use of mythological and biblical subjects as a framework to create deeply expressive and original paintings is a lasting testament to his uniquely humanist vision.

During the mid to late 1940s, Boyd created his first paintings based on the parable of the Prodigal Son (New Testament, Gospel of Luke). During this period, Boyd depicted numerous biblical subjects; a preoccupation that author Franz Phillip attributes to the artist’s study of Old Master reproductions and the Rembrandts in the National Gallery of Victoria.1 This influence was undoubtedly augmented by the many bible stories that were read to him by his grandmother, Emma Minnie Boyd (1858-1963), when he was a boy which lodged in his imagination to become a fertile source of future creative material.2 Boyd’s early works of the Prodigal Son directly reference scenes from the narrative, which describes a son who extravagantly wastes the fortune given to him by his father and subsequently falls into poverty, forced to become a swineherd. The starving and repentant son returns to his father seeking forgiveness, which is readily granted by the magnanimous patriarch. A parable of loss, redemption and mercy, it is one that Boyd revisited at multiple points during his career – and as late as 1995 in a series of etchings.

While engaging with this theme the painting in question displays a marked stylistic difference from his Old Master-inspired biblical works of the late 1940s. Another point of departure is the avoidance of a recognisable scene from the narrative, such as the joyful reunion of father and son which, being the culmination of the tale, is most frequently depicted. Rather, Boyd creates a highly expressive, gestural interpretation that employs a cast of symbolic motifs, both personal and universal, all fused within a roiling bush landscape.

The figure in red, the treatment of paint and the abstraction of figurative elements brings to mind Boyd’s iconic Nebuchadnezzar series which he commenced in 1966 and exhibited in Australia and the United Kingdom in 1968-69 respectively.3 Of particular similarity are Boyd’s depictions of Nebuchadnezzar which vividly evoke the King of Babylon’s descent into madness, as described in the Old Testament. One painting, Nebuchadnezzar Running in a Forest with Lion and Black Birds (Boase, pl. 28) 4 contains echoes of the present work in its overall composition of dense scrubland, the fusion of figurative elements with natural surrounds, and the image of a threatening black bird with red eyes. Boase notes that in some works from the Nebuchadnezzar series, the black birds that frequently appear to taunt the mad king develop something akin to “curling ram’s horns.”5 A striking parallel exists between this horned-bird motif and the black creature that hovers over the central prostrate figure in Prodigal Son in Bush, which has the same curling protrusions. Alongside these forms, a curved, green snake-like emblem emerges to encircle a figure in white, reminiscent of a woman shielding her face.

This litany of personal symbols and their energetic handling indicates Boyd’s truly expressionist approach, where the ‘manner and execution conveys states of feeling; distortion, illogical, spatial relations and idiosyncratic handling serve to convey the intense involvement of the painter with his theme.”6 In Prodigal Son in Bush the bushland setting and the strange animal/human forms it contains refers to the crisis point in the parable where the prodigal son is forced to live in the wild amongst swine. As in the Nebuchadnezzar series, the bush becomes a site of intense psychological anxiety, a space of moral degeneration and fall from grace.

The interconnection of all elements in this work highlight Boyd’s particular talent for evoking man, beast and nature caught up in the same expressive maelstrom of strange and malevolent energies. Like his most successful paintings of ancient narratives, in Prodigal Son in Bush Boyd abandons logic to invoke a mythic and spiritual dimension that creates an enigmatic resonance, one that reaches beyond pure representation.