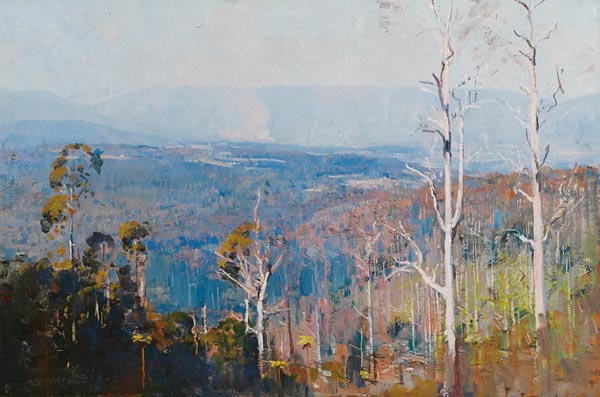 Sir Arthur Streeton (1867-1943) is widely regarded as one of the early twentieth century’s foremost painters of the quintessential Australian landscape. A member of the Heidelberg School that also included Tom Roberts (1856-1931), Frederick McCubbin (1855-1917), and Charles Conder (1868-1909), these now celebrated figures were once young artists creating rebellious artistic statements in the face of the prevailing academic style. This culminated in their famous 9 by 5 Impression Exhibition of works painted on cigar box lids staged in Melbourne in 1889, revealing a new aesthetic that reflected international trends of Impressionism and painting en plein air. The sketch-like immediacy and freshness that characterised these works caused a sensation, and cemented their place in the story of Australian art.

From these radical early beginnings Streeton’s work went through a number of developments. He spent an extended formative period living in London between 1897–1920, absorbing the art of the great masters, and served as Australia’s war artist during the First World War. However the most receptive audience for his work was always on Australian shores, and in February 1920 Streeton, his wife Nora and their son Oliver returned back to the artist’s homeland to live permanently. Based in the Melbourne suburb of South Yarra, Streeton purchased a property at Olinda in Victoria’s Dandenong Ranges in 1921. However it was not until 1924, and the sale of his painting Golden Summer, Eaglemont 1889 for the record sum of 1000 guineas that Streeton had the funds necessary to build a house upon the land.1 The house, Longacres, was completed by November 1924 and in 1925 when the present work was executed, the artist and his family spent their time between Melbourne and their new home in the Dandenongs.

The forested mountainous landscape of the Dandenong Ranges resonated deeply with Streeton, and he painted many panoramic views of this countryside over the following two decades.

The present work bears similarity to two other Streeton paintings that depict views of the region. The Valley from Kennon’s 1925 in the collection of the National Gallery of Victoria was painted the same year as the present work, and takes in a classic panoramic view. The rolling hills and areas of patchy woodland are cast in the earthy green of native eucalypts, so different from the verdant deciduous green of his former English surrounds. Thomas Kennon was a prominent district resident during the 1920s, and the Kennons owned the mansion, Kenloch at Olinda. Thus it is likely that Streeton would have made the Kennons’ acquaintance in the small and close-knit community at Olinda, and The Valley from Kennon’s possibly takes in a view from that family’s property.

In this and the present work we see the artist observe the Dandenongs with a realism that moved away from his earlier impressionist leanings. While Streeton absorbed lessons from Impressionism and is indeed defined as the leading Australian artist working in this mode at the turn of the century, his later work reveals a weightier density of brushwork, an increased solidity and clarity of forms, and a greater attention to composition with clearly defined fore, middle and backgrounds that effectively lead the eye into the recessional space within the picture. These historical conventions of landscape painting pushed his work toward a more defined observation of nature than seen in his earlier Heidelberg School studies of light and atmosphere.

Another painting created nine years after the present work exemplifies the qualities that characterise his mature style, and also bears marked similarities to the composition of the present work. In The Vanishing Forest 19342 painted at Olinda we see the foreground described in greater detail, leading to the deep valley in the mid-ground which appears as a painterly blur of earthy ochres and greens, dotted with reflective blue oblongs that denote bodies of water. Blue mountains rise up in the distant background to enclose the monumental space of the valley.

The Vanishing Forest is noted by Geoffrey Smith as one of the most important works Streeton painted in the last decade of his life.3 It is a statement against the deforestation of his beloved Dandenong Ranges for which Streeton was a passionate advocate, and reveals his increasing interest in the conservation of our natural wilderness areas. In the context of 1920s and 1930s Australia this environmental impulse was well ahead of its time. In this work we see the stark white forms of gum trees stripped of their vegetation in the right of the foreground, while a large uprooted tree trunk dominates on the left, bringing the destruction caused by logging into sharp relief.

The Valley could have arguably been painted from the same location albeit nine years earlier, so similar is the composition and shape of the distant blue mountains. In this work Streeton also depicts two pale gums rising up in the right-hand foreground, though here they have slightly more vegetation. In 1919-20 raging bushfires burnt through the Dandenong Ranges and destroyed forests around Olinda and Sassafras. The visual evidence of these fires is seen in many of Streeton’s works based on the region, where the artist depicts charred or stripped trunks and re-growth.4 The two naked gums in the present
work act as reminders of this devastating fire, a link further reinforced by the plume of smoke that rises from the base of the distant mountains.

Streeton’s painterly observation of his environment still sparkled with light and atmospherics in his mature period, despite the fact that he drew sharp criticism for his shift in aesthetic after his time spent abroad. One critic claimed that ‘Streeton is no longer a realist or an impressionist… he has absorbed certain British conventions…has become in his art, an Englishman.’5 While Lionel Lindsay wrote of Streeton’s mature work ‘…the gay and exquisite impressionist has become a picture builder, availing himself of the formula of the masters.’6 Streeton also drew fire for his apparent commercialism during this period, as while his shift in style from evocative impressionist scenes to sweeping panoramic views of the Australian landscape may have irked some critics, it captivated a healthy market for his works.

Collectors responded to Streeton’s essentially positive depictions of the grandeur and beauty within the Australian landscape, which were deeply satisfying for an audience recovering from the collective trauma of World War I. The artist’s depictions of the Dandenongs, Sydney Harbour and various other scenic locations reinforced a sense of nationalism and pride in country. As stated by Mary Eagle, ‘He affirmed the power of iconic imagery to satisfy a widespread need to recognise certain mythic qualities in the Australian landscape.’7

Part of the visual language of iconic imagery that Streeton developed was his frequent use of the so-called ‘Streeton blue,’ a preference for which he rebutted in 1924, saying that he sought to capture ‘…as much of the colour variation of Nature as possible.’8 Rebuttal or no, the artist’s use of light cobalt and ultramarine violet is frequently visible in his work, and The Valley is no exception. Here the deep violet and shades of blue are carried from the background mountains through the mid-ground of the picture to create a sense of atmosphere and distance, while contrasting effectively with the earthy russets, ochres and greens of the trees and vegetation.

Also in Streeton’s vocabulary of iconic landscape imagery are the panoramic views that convey the immensity of space and the monumental quality of Australia’s varied terrain. Streeton visually embraced the Australian bush, as demonstrated in the seductive warm glow of a summer afternoon the artist effectively envisions in the present work.

All is executed with masterful handling of paint that reveals an artist at the height of his creative powers, a talent for which he was, and still is, regarded as the most renowned and accomplished landscape painter of his generation.