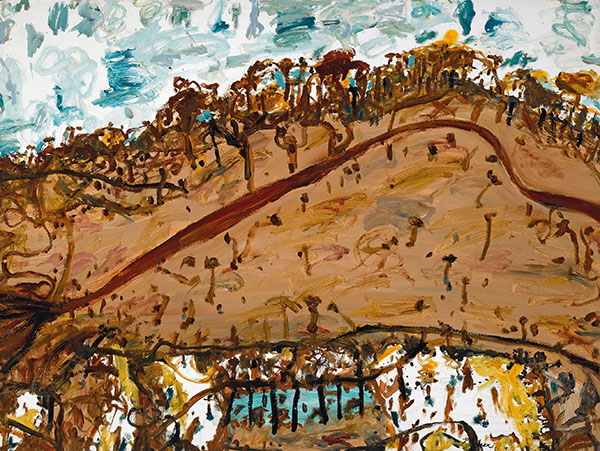 By in Blog
Lot:
Landscape

Over the last sixty years, John Olsen’s art has become synonymous with the unruly beauty of the Australian landscape.  Embracing both figuration and abstraction, Olsen’s highly lyrical paintings are instantly recognisable, merging land, sky and water into a vivid sensation borne from a very personal perspective of the world. As Deborah Hart writes, ‘Olsen has confronted and helped redefine our basic conception of landscape… providing a psychological encounter with place, not only as seen but as experienced, resulting in a fresh, exhilarating vision.’1

Like Olsen, Williams devised his own unique perspective of the Australian landscape.  Though created several decades after Olsen’s time at Dunmoochin, the influence of Williams is immediately apparent in Olsen’s Landscape 1993.  Williams’ visual signature – an overtly high horizon line scattered with straggly vegetation – is clearly echoed in this painting.  In his catalogue essay for the major survey exhibition John Olsen: The You Beaut Country in 2016, curator David Hurlston drew upon the deep connections between the two artists: ‘To view Fred Williams’ work is to understand Australia as the driest continent on the planet; to look at the paintings of Olsen is to register the sense of the flowing life forces of the Australian condition.’2

Somewhat unusually for Olsen, Landscape adopts a largely horizontal perspective of its subject while still containing the most compelling aspects of the artist’s enduring style. Olsen’s innate sensibility for the colours of the Australian landscape is on full display here. The undulating hills are coloured a salmon pink, an aspect Katherine Olsen grew fond of and commented on as a defining feature of the Rydal landscape surrounding their property Chapel House Farm.3 Capturing nature in constant flux, a cracked drying dam sits in the foreground, its puddling water reflecting the intense blue of the sky. In the centre, a well-worn dirt track snakes its way through sporadic vegetation, running parallel to the horizon line. In emulation of Williams, Olsen’s horizon line is set high within the composition, the picture plane tilted towards the viewer.  The crest of the hill is densely bursting with scrub, made up of loose, sinuous brushstrokes.  In Landscape, as in several of Olsen’s major works from the 1990s, we see his capacity to integrate more clearly defined imagery without losing his essential imaginative drive.4