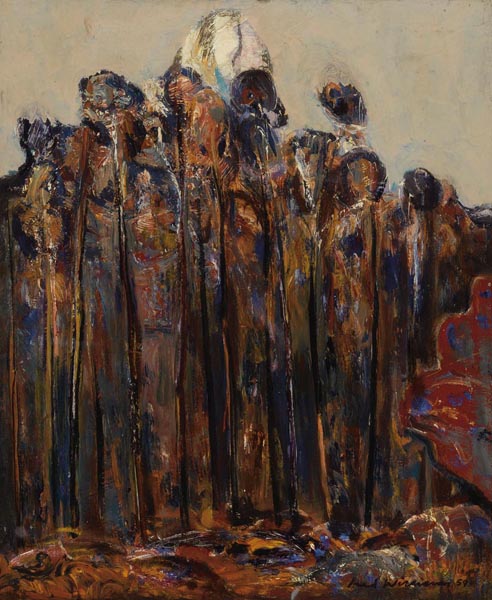 ‘His career stands as a perpetual reaffirmation of the idea that all great landscape artists teach us how to look anew at our surroundings. After one has grown familiar with his work, it is virtually impossible to gaze upon a tract of scorched red earth, a square of scrubby bush, or a slow-curving hill dotted with aloof, ungainly eucalypts, without seeing a ‘Williams’.’1

In 1956, 29 year-old Fred Williams returned from five years in England, where he had gone to further his studies and broaden his artistic horizons. He stepped off the ship in Fremantle and was dazzled by the Australian light and landscape. The shock of his reacquaintance with the local environment was the catalyst that made him turn more intently to depicting the landscape. The artist recalls the epiphany which would significantly shape his artistic career: ‘It became obsessive with me, I just thought that I would like to paint some pictures of it, and I set about doing it.’2

Despite Williams’ enthusiasm for the Australian landscape and the pleasure he found in painting it, he found it to be mostly ‘unpicturesque’. There was no beauty to be found in the dry, arid scrub or the coarse, spindly grasses. Unlike those artists who came before him, he had no intention of romanticising the bush; Williams’ challenge was in portraying the landscape as he saw it. Contradicting the sentimental ties to the land which had formed in the public psyche prior to Federation, Williams used his extensive knowledge of art history and the European masters to paint his own, unique vision of the Australian bush: ‘While Williams landscapes are grounded in close observation, they also have a metaphorical dimension and a relationship to art history that lifts them into an entirely different category of aesthetic experience. ‘3

Williams’ first painting expedition after his return to Australia in 1957 was to Mittagong, in the southern highlands of New South Wales. He stayed with friends on a property in an area of lush bushland and it was here he formulated his ideas on landscape painting. His ideas centred around the landscape renderings of Paul Cézanne (1839-1906), the artist whom Williams admired greatly and was most closely allied to in his artistic foundations.  In the present work, Saplings, painted in 1959 - two years after Williams’ arrival back in Australia, the influence of Cézanne is evident in the crowded patchwork of brushstrokes and sharply outlined forms of the trees. Here, Williams has included delicate daubs of bright blue and violet to capture the play of light falling through the dense overhead canopy.  This early work demonstrates the manner in which the landscape was used by Williams as a vehicle for his own explorations in form and colour.

1959 was also the year in which The Antipodeans was formed. Williams was excluded from the group which had Arthur and David Boyd (1920-1999, 1924-2011), Charles Blackman (born1928), Clifton Pugh (1924-1990), John Perceval (1923-2000), Robert Dickerson (1924-2015) and the artist’s close friend John Brack (1920-1999) as founding members. The group was established to protest the growing popularity of abstraction in Australia. Williams’ exclusion could be blamed on his style being too abstract for the group. Despite an invitation a few months later, Williams declined. In hindsight, his exclusion from the Antipodean movement allowed Williams to continue forging his own individual course, ‘he looked at everything and took whatever he needed, navigating a middle passage between abstract and figurative art.’4

Fred Williams’ singular focus on the real, physical presence of the landscape and his immersion in art of the past and present set him apart from his contemporaries. His individual approach in honouring the authenticity of the landscape would ensure his place in the history of Australian art – ‘it is the unflinching honesty of his vision that makes his work so consistently powerful , so individual, so hard to incorporate into any story but his own.’5