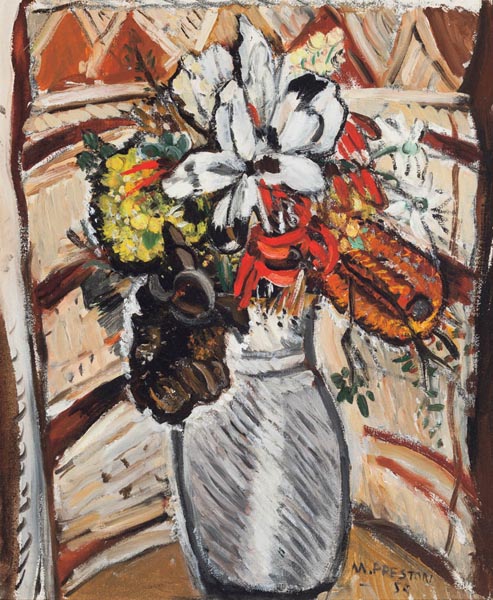 Margaret Preston is one of Australian’s most innovative and identifiable female artists. Fiercely independent and opinionated, she was at the forefront of progressive art, producing a large body of work that has made a significant contribution to the traditions of Australian art. Born in Adelaide in 1875, she began her professional career as an artist following two years at the prestigious National Gallery of Victoria Art School in Melbourne under the tutelage of director Bernard Hall (1859-1935). It was here that the young artist’s commitment to the genre of still life began and would remain for the rest of her career, her oeuvre dominated by her explorations of the theme.

She travelled to Europe in 1904, studying for three years in Munich and Paris, making a longer second trip in 1912, where she saw the post-Impressionist exhibition organised by Roger Fry in London, and exhibited paintings at the New Salon in Paris and the Royal Academy and New English Art Club in London. Back in Australia by 1919, Preston settled in Sydney, working on still lifes in a modernist style, informed by her experience of avant-garde art in Europe and characterised by bold geometric shapes and black outlines. In the early 1920s, she moved rapidly to the forefront of progressive art, ‘Her search for the essential truths of the Australian condition as the basis for an authentic modern, national art… should draw from a fusion of the principles, motifs and techniques of Asian, Western, and Aboriginal art, independent of Australia’s reliance on British traditions and the growing influence of American trends.’1

From 1932 to1939 Preston lived with her husband, William Preston, at Berowra, on the upper reaches of the Hawkesbury River. The area was one of rugged natural beauty, and the artist’s house was surrounded by scrubland and Aboriginal rock engravings.  Preston developed what was to be a lifelong interest in Aboriginal art , believing that Aboriginal art provided the key to establishing a national art that reflected the soul of the vast and ancient continent of Australia. The artist became a member of the Anthropological Society of New South Wales, later visiting many important Aboriginal sites throughout Australia.

Preston’s art took on a radical reorientation in the 1940s, evident in the adoption of the artistic principles, motifs and palette of Aboriginal art. She eschewed the bright, fresh tones of her earlier works in favour of natural earth pigments from the Northern Territory and began incorporating Aboriginal techniques such as cross-hatching into her paintings and prints. Despite her exploration into Aboriginal culture and art, and a brief period painting landscapes, the still life remained as Preston’s most enduring genre. The artist’s still lifes of the 1950s are characterised by the black outlining and earth-coloured palettes seen here in Flowers (Australian), (also known as
Native Wild Flowers), of 1955. The present work is an exceptional example of Preston’s late-career work, possessing the unique qualities that identify Margaret Preston as one of Australia’s most celebrated modernists.