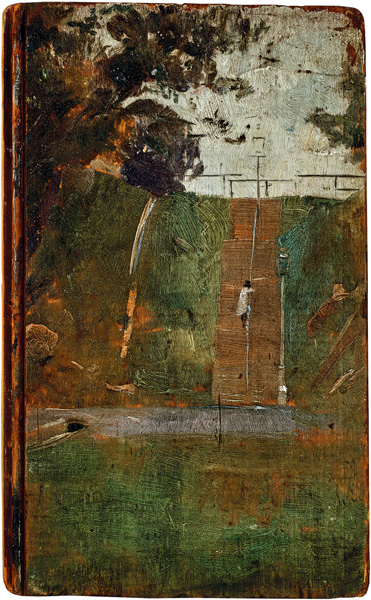 Tom Roberts once wrote that significant art was, ‘the perfect expression of time and place.’1 It was during the late 1880s, after his return from Europe in 1885, that Roberts developed this expression in his art. Art historian Virginia Spate cites this period, prior to the turn of the century, as the most exciting of Roberts’ career.2 In August 1889, the legendary 9 by 5 Impression Exhibition opened at Buxton’s Rooms on Swanson Street in Melbourne, showing works by Roberts and his Heidelberg School contemporaries Arthur Streeton (1867-1943) and Charles Conder (1868- 1909). The exhibition’s title references the dimensions of most paintings at 9 by 5 inches (or 23 x 13 cm), the size of the cigar box lids upon which they were painted. Although Roberts had been painting ‘9 by 5s’ since 1884, this was the first time he publicly identified himself with Impressionism, shedding his reputation as a conservative portraitist with this ‘clear radical gesture.’3

The conception of the exhibition owed much to James Whistler’s (1834-1903) exhibition of tiny panels titled Notes, Harmonies and Nocturnes, which Roberts had probably viewed in London in 1884. However, while Whistler’s influence was undoubtedly strong, Spate notes that, ‘Robert’s accuracy of observation of almost imperceptible effects of light was unequalled by Whistler who evoked light in a rather more abstract way.’4 Almost all of the sixty-two works that Roberts exhibited have since disappeared, however those that remain vary in terms of style and subject. It is also difficult to distinguish which paintings of this 9 by 5 size were included in the initial 1889 exhibition, as Roberts continued to paint in this format for years to come, including The School Track a decade later.

Two painting known to have been in the 9 by 5 Impression Exhibition are By the Treasury 1889 (National Gallery of Victoria collection, Fig.1) and Going Home c1889 (National Gallery of Australia collection, Fig.2). One can easily see the similarities between these painting and The School Track: the figures moving away from the viewer, the iconic vertical format enhanced by the paths receding deeper into the composition, and the charming observational casualness of the painting style. While these two paintings come from Roberts’ time in Melbourne, By the Treasury depicting the Old Treasury Building at the top of Melbourne’s CBD, The School Track is emblematic of Roberts’ Sydney years, its tone far warmer than the greys of Melbourne.

Roberts moved to Sydney in 1891, where his paintings became more abstract in their expression. Roberts spent his first five years in Sydney living in Curlew Camp, an artist’s camp on Little Sirius Cove (now part of Mosman Bay), previously inhabited by Streeton. This differed from the artist’s camps around Melbourne in that it was more a product of economic necessity after the 1890s economic crisis rather than the artists’ choice.5 In 1896, at the age of 40, he married Elizabeth (Lillie) Williamson and moved out of Curlew Camp to live in Balmain, the location of our present painting. Their only son, Caleb, whose inscription is on the verso of this work, was born two years later in 1898. Shortly after, in 1903, the family relocated to London.

The School Track is thought to have been painted around 1900, during the seven years that the Roberts family lived in Balmain. It depicts a schoolgirl climbing a flight of stairs typical of Sydney’s steep suburbs. The broad horizontal strokes of umber that make up the steps are surrounded by the olive-green vegetation and the blue-grey sky. Helen Topliss includes an informative note for The School Track in her Tom Roberts catalogue raisonné that reads:

This panel was found by Roberts's family in his studio after his death. It is inscribed on the reverse by his son, Caleb ... According to the family this represented a schoolgirl walking up the steps at Balmain, where Roberts lived in Sydney. The picture remained in Roberts's possession and was possibly exhibited in 1928 in Melbourne.6