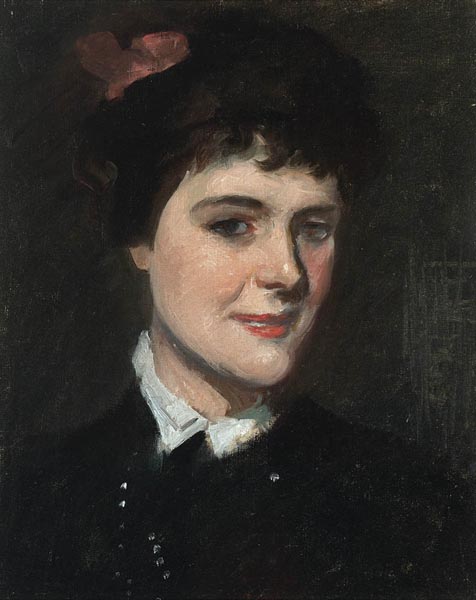 Note: This work is now listed in the official Rupert Bunny Catalogue Raisonné by the world authority David Thomas, published this year by Thames and Hudson – where it is retitled and renamed as Jeanne also formerly known as The Artist’s Wife, Jeanne Morel c1895.

Rupert Bunny was one of Australia’s most underrated and unappreciated artists – that is, until David Thomas’s first scholarly text of 1970. Some of this neglect was due to the view that Bunny’s work did not have enough Australian subject matter – that it was “un-Australian". Much of this was promulgated by the influential J.S. McDonald (1878-1952), Director of the National Gallery of Victoria from 1936 to 1941.

Writing in the Bulletin magazine in 1948, one year after Bunny had died, McDonald held the opinion that Bunny lacked originality and saw “through the eyes of painters already notable”. In other words, that he paraphrased the work of others. Not only that, McDonald held that Bunny could not paint the Australian landscape.1 This is a curious and muddle-headed view that even the arch conservative and anti-modernist McDonald should have seen through. If Bunny was alive he well could have asked whether there was an Australian mathematics or an Australian chemistry!

Bunny was not a parochial or bigoted man and his natural cosmopolitanism shunned trenchant views. Furthermore, it is hard to see how, as in Bunny’s painting Jeanne newly as of 1894, one could view her through any other eyes but his own. Whatever the case, it is worth noting that in 1941 McDonald was dismissed by Sir Keith Murdoch (Rupert Murdoch’s father) from the National Gallery of Victoria for holding these types of views and for his ferocious attacks on Modern art, especially the 1939 Herald Exhibition of French and English painting.

The position in Europe was very different. Bunny was accepted, respected and successful. In 1901, Bunny transferred his artistic allegiance from Paris’s Old Salon to the New Salon, the Société Nationale des Beaux-Arts where his style and technique changed from more naturalistic forms to lighter, softer and “airy” compositions.

This change may be more closely appreciated when one compares Bunny’s painting Jeanne of 1894 with his Portrait of the Artist’s Wife of 1914, in the collection of the Newcastle City Gallery. This later painting is worked in a higher key, the brushwork is broader, the tonal contrast is almost gone and the painting is colouristic in its aim. A major transition had occurred and one can see in this painting how responsive Bunny was to the work of Claude Monet (1840-1926) and to the turn of the century French Intimist School and artists such as Pierre Bonnard (1867-1947) and Édouard Vuillard (1868-1940). All three of these quietistic artists were content to paint modest scenes, interiors and domestic views in ways that conveyed calm, comfort and aesthetic contemplation.

Bunny’s painting Jeanne of 1894 is, by comparison, of a different order. It belongs to Bunny’s earlier phase when he painted more naturalistically and more in the Grand Manner, as it was called, of the Academy. The portrait is tonally wide, the flesh tones are more natural and the brushwork shows more dash and bravura and is delicately swirled about in a manner suggestive of the English artist Walter Sickert (1860-1942). The painting is very carefully composed and restricted in colour and shows Bunny’s remarkable skills in portraiture and it is little wonder that Dame Nellie Melba insisted that he paint her portrait eight years later.

For Bunny the turn of the nineteenth century marked a change and it is remarkable that he should paint so differently in such a short time. However, upon reflection it may not be so remarkable. This might be profitably compared with a master composer moving from writing symphonies to sonatas.

Bunny’s painting Jeanne of 1894 belongs to his fuller symphonic mode and he does not return to it again. Looked at in this way, Bunny’s painting is not a transitional work but a compendium of all that he had learnt before. Its visual clarity and full-blown aesthetic note respond to different times – this is why the present painting is so seductive today.