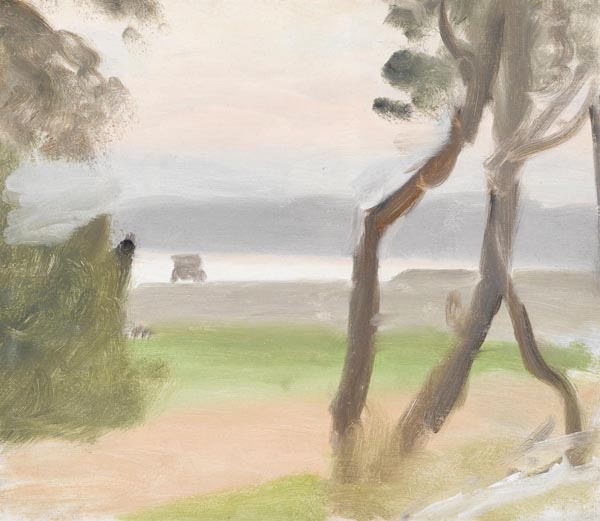 Clarice Beckett, now recognised as one of Australia’s finest early modernists, lived a humble life. She never left the state of Victoria and painted most of her oeuvre in the Melbourne seaside suburb of Beaumaris while caring for her aging parents, often the duty of an unmarried daughter at the time. She attended the local primary school in Casterton, and Queens College in Ballarat, before finishing her secondary education at Merton Hall in South Yarra (not far from Como House which was designed and built by Clarice’s great-grandfather, John Brown).

At twenty-seven, her parents allowed her to attend the Victorian National Gallery School, where she studied from 1914 to 1917. After these valuable if not slightly stifling years at the Gallery School, Beckett was eager for something fresh, so moved on to study under the tonalist, Max Meldrum (1875–1955). Meldrum was causing controversy amidst the conservative academic ranks of the Melbourne art world by presenting his neo-scientific views of art as science in lectures at the Athenaeum Theatre. Beckett learned from him a basic theory of colour tones as a technique for capturing an ‘exact illusion of reality’.1 While Meldrum meant this phrase quite literally, Beckett engaged poetically with the ambiguity of an ‘exact illusion’, and eventually left Meldrum in her wake developing her own distinctive style, though always utilising his theory of tonal values. The present example, The Old Model T Ford demonstrates her mastery in handling the colour grey, with the grey swathes of sky, land and sea offering such variety in tone that the near total absence of other colours in not felt.

In exploring the fine line between reality and illusion, exactness and impression, Beckett’s works attained a characteristic ephemeral quality, or what her critics called a ‘fuzziness’. It is true that there is a deliberate lack of attention to detail, however it is palpable how meticulously she has considered the subtle relationships of tone, colour and composition. Meldrum was heard to have said of Beckett, ‘Miss Beckett does not push her paint backwards and forwards all over the canvas, she places it where it truthfully belongs.’2 Indeed, her works have a terrific economy of paint and brushstrokes. Her limited use of colour and sure handling of tone undoubtedly derive from Meldrum’s teachings.

However, Beckett countered the limitations of Meldrum’s overly theoretical tonalism by employing recognisable motifs as verticals in her landscapes. Telegraph poles, boathouses, roads and trees, as in this example, are used to break up the washes of seas and skies. In the present work the distant car anchors our eye, while the trees relieve the strong horizontals of the background landscape, adding both heft and dynamism to the composition.

One such motif Beckett became known for was of course the early motorcar, as we see in The Old Model T Ford. The Ford T Model is widely regarded as the first affordable automobile, which perhaps explains Beckett’s repeated depictions. As author Rosalind Hollinrake describes:

‘She became a master of the early motorcar often shown with its tail lights disappearing around a bend in the road or on a dusky evening, or with headlights warmly glowing in the fog, rattling forward in a purposeful manner; mundane machinery transformed into a haunting unforgettable lyric.’3

Despite formal education, pure talent and exhibiting annually for a decade from 1923, Beckett was never fully appreciated during her lifetime. One of the few art critics who recognised her talent was Alec Colquhoun, who commented in The Age in 1921, ‘[Beckett has] a power to record certain truth in nature with a charming ingenuousness which seems to be free from any hint of elaboration or effort.'4

Beckett died aged forty-seven in 1935, leaving many of her paintings to languish in a barn in rural Victoria. Nearly forty years later they were discovered by Rosalind Hollinrake who restored them and presented them to the public in two hugely successful exhibitions in 1971 and 1972. The National Gallery of Australia purchased many of her works at this time, and she is now represented in every major state gallery collection.