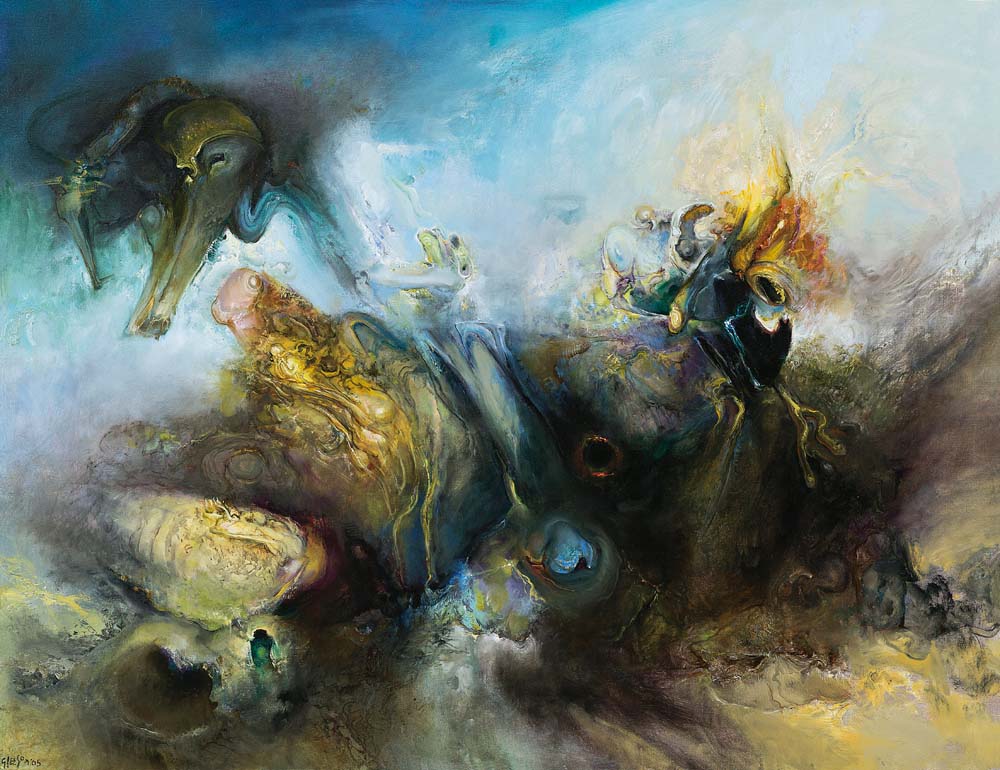 By Ken Wach in Blog
Lot:
Figurations in Search of Identity

For the Surrealist artist James Gleeson, the great Leonardo da Vinci (1452-1519, Florentine) got it right. That is, in 1508, when he outlined his method of “jump-starting” the creative imagination:

I cannot forbear to mention among these precepts a new device for study, which, although it may seem but trivial and almost ludicrous, is nevertheless extremely useful in arousing the mind to various inventions. And this is, when you look at a wall spotted with stains, or a mixture of stones, if you have to devise some scene, you may discover a resemblance to various landscapes. Beautified with mountains, rivers, rocks, trees, plains, wide valleys and hills in varied arrangements; or, again, you may see battles and figures in action; or strange faces and costumes and an endless variety of objects, which you could reduce to complete and well-drawn forms. And these appear on such walls confusedly, like the sound of bells in whose jangle you may find any name or word you choose to imagine. (author’s italics) 1

These words from the mists of time and the mind of a universal genius are the hidden source of the tangled forms of the present painting Figuration in Search of Identity of 2005. This magisterial painting created just three years before Gleeson’s death is a mature application of Leonardo’s almost 500-year old advice for stimulating the artistic imagination.

Essentially, it’s all a matter of suggestion and association. A form suggests itself and the mind ascribes a content, an attribute, a meaning, an association. The process is automatic, unpremeditated and “illogical”. It leads straight to originality – of course, Leonardo was not a Surrealist but he certainly had a point.

Furthermore, Leonardo’s imagination-jogging procedure is charmingly free and has all the innocence of children, lying on their backs in the grass, imagining shapes in the form of clouds above – an activity that may well be regarded as the seedbed of all human imagination. There is no doubt that Gleeson took a useful view of Leonardo’s “new device” and saw it as an ancestor of the Surrealists’ reliance upon a type of musing free form imagination.

In this sense, Gleeson’s Figuration in Search of Identity of 2005 is conceptually very closely related to two highly significant works: his triptych entitled Signals from the Frontier of 1958 in the National Gallery of Victoria in Melbourne, as a gift from Mrs. D. Carnegie and his collage work Look at the Stains of Walls of 1978, formerly in the Agapitos/Wilson Collection in Sydney and now in the National Gallery of Australia in Canberra. Looking at the present work and these two masterworks, all created within a full forty-seven year period, reveals just how seriously and effectively Gleeson took Leonardo’s words to heart.

Gleeson’s Figuration in Search of Identity of 2005 depicts a scene almost cosmic in its writhing energies. The imagined landscape suggestive of land, sky and sea seems caught in a swirling mass of associations. Certainly, we can trace our own meandering paths through the painting, but it is Gleeson’s mental associations and visual metaphors that need to be kept uppermost in mind.

What might these mental associations and visual metaphors be? Over a lunch, a cup of tea or a quiet pause the unfailingly modest and impeccably polite Gleeson would now and then caution against what he called “feral technology” – not normal technology, but the unheeding rampant type that is driven by greed and egoism. He was first made aware of these hidden tendencies with the outbreak of the Minamata Mercury catastrophes in Japan in 1956 and the Thalidomide Baby scandals in Australia after 1959. These soured Gleeson’s mind – they were distasteful to his humanistic outlook, his love of culture and his belief in betterment.

What Gleeson’s painting Figuration in Search of Identity reveals is a cautionary tale: one of a landscape gone awry in a world that has gone askew.

1. Da Vinci, L., “A Way of Developing and Arousing the Mind to Various Inventions”, in Holt, Elizabeth, G., (Ed.), A Documentary History of Art, vol.1, The Middle Ages and the Renaissance, New York, Doubleday Anchor Book, 1957, 283