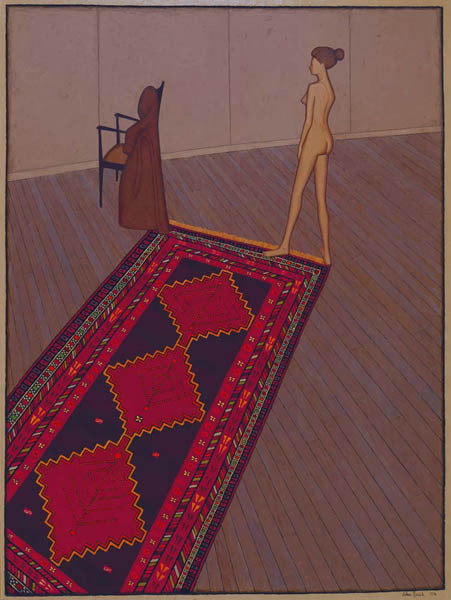 When John Brack painted his first series of nudes, which he exhibited in 1957, he had already formulated his attitude to the subject; he noted at the time: “When I paint a woman … I am not interested in how she looks sitting in the studio, but how she looks at all times, in all lights, what she looked like before and what she is going to look like, what she thinks, hopes, believes and dreams. The way the light falls and casts its shadows is merely boring and a hindrance unless it helps me to show these things.”1

For Brack, the nude remained a significant aspect of his oeuvre from 1957 to 1985.  The 1973-74 series of nudes, to which the present painting belongs, occupies a particular and critical moment in Brack’s development as an artist.  On the 19th November 1972, John Brack, at the age of fifty-two, left for London on his first trip abroad.  He was away for three months, spending much of the time in the museums of London, Paris, Brussels and Amsterdam and, on his return to Melbourne (via Mexico) on 22nd February 1973, he immediately plunged into work completing a series of gymnast paintings that he had commenced before his departure and embarked on a large series of drawings of the nude.  The most immediate catalyst for the series was gentle pressure from his friend Lenton Parr (1924-2003), who temporarily succeeded Brack as the Director of the Victorian College of the Arts 2 and persuaded Brack to hold a joint exhibition with George Baldessin (1939-1978) as part of the 22nd Festival of Perth.  During November and December 1973, Brack worked intensely from the model on twelve large conté drawings that were subsequently exhibited at the Desborough Galleries in Perth in an exhibition titled John Brack Drawings/George Baldessin Etchings.3 Here the drawing listed as Nude with Geometric Carpet 4 served as a study for the present work.  Brack selected a handful of the most successful drawings as studies from which to undertake his series of paintings of the nude which he commenced early in 1974 and which were exhibited to considerable acclaim early the following year in both Melbourne and Sydney.  Art critics singled out Nude in Profile for praise and Sandra McGrath wrote: “She stands alone and dimly erect on a dark red patterned Persian carpet.  Brack’s art celebrates an intellectual rather than an emotional approach to art and life.  It’s a unique vision and puts him outside the mainstream of Australian art.”5 Nancy Borlase (1914-2006) found this exhibition by Brack as “his most curious and, perhaps, his most profound”.6

Although Brack is an artist who frequently follows a regular working progression from the sketch to the drawing and on to the final painting, sometimes preceded by a large watercolour study, in this instance the accomplished drawings served only the role of an aide-mémoire, suggesting some of the compositional inventions, but the intent and purpose of the paintings were quite different.  The painting, Nude in Profile, in almost every aspect of the composition and in the conceptual structure of the work, has altered the drawing.  The constant elements are the slightly built nude model posed in profile with her hair tied back in a bun; the studio prop of the chair with a garment slung over its back; the setting in the rather austere artist’s studio with bare walls and naked floorboards as well as the geometric Persian rug, although one should observe that Brack decided to change to a more simplified rug in the painting.

The most radical transformation that had taken place between the series of nudes that Brack had painted between 1970 and 1972, before his trip to Europe, and the series that he embarked on in 1974, after his return, is the development in his thinking as an artist.  While both series are a comment on the traditions of art history and the role that the nude occupies in this tradition, the earlier paintings speak of grandeur and the geometric structure of the picture space,7 while Nude in Profile is all about the precariousness of being and instability.  Brack adopts the formal strategy of suspending the main panel of the composition within a secondary painted illusionistic picture frame so that the main composition is no longer firmly anchored in space, but appears to float and drift over the surface.  The floorboards of the studio create their own perspective with a steep and unsettling thrust, so that the model and objects do not seem to secure a space on the floor, but appear in motion sliding backwards from the skirting board, which dissects the composition.  The whole picture plane is shown floating within a tilted internal frame within a frame.  The nude model, is somewhat diminutive in scale, her feet cautiously framing the corner of the carpet, while the adjoining corner of the carpet is obscured by the chair with its draped garment and seems to occupy an uncertain physical location in the studio.

Within this bare, naked reality of the studio space, the artist’s ‘here and now’ in which he spends most of his days, the Persian carpet is the largest single compositional element in the painting and speaks of a different and vibrant palette, in contrast with the browns, greys and pastel tones of the rest of the painting.  If everything in the painting appears as temporal and existing in an uncertain world where at any given moment the whole structure could collapse and all could be translated into a world of smoke and mirrors, the carpet belongs to a timeless civilisation, in one sense primitive and at the same time eternal.  Brack was drawn to the idea of the handcrafted object that broke with the manufactured regularity, an object that seemed to speak of something that had always existed beyond the usual limits of time and space.  The Persian carpet, the only thing present in the studio other than the model and the chair, provides a contrasting note of opulence, as well as a link to a timeless past.  As is so often the case in Brack’s art, the oriental rug may be read as a reference to a human collective subconscious with its tribal patterns and the bright, but natural colours, point to a time before recorded history.

Like a number of Brack’s paintings of this time, including Nude in Profile and Nude in High Backed Chair (1974), in the collection of the National Gallery of Victoria, they are about an individual’s precarious path through life, where everything is stacked against them and, at best, the individual could hope to negotiate a modest path with an awareness of the challenges that surround them.  Later, reflecting on this new perspective Brack observed: “Gradually I became conscious that if I am looking at the world, then I am looking at it from a great distance both in place and time.  Melbourne is about as far away as you can be … Gradually I came to look at the world physically from a long way away.”8

Nude in Profile is Brack’s beautiful, masterly and exquisite exploration of a person’s journey through life, a rare and unique achievement in art.

2. John Brack was the Director of the National Gallery School between 1962 and 1969 that subsequently became the Victorian College of the Arts.  Lenton Parr was appointed as Acting-Director

7. Patrick McCaughey described Brack’s nudes in 1972 as “amongst the finest drawings of the figure in Australian art”, Patrick McCaughey, “These nudes form a distinguished display”, The Age, 5 July 1972