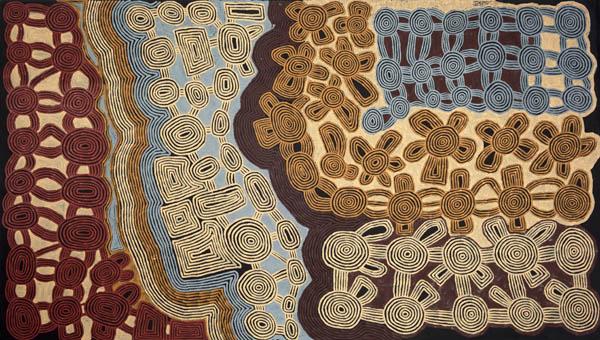 By in Blog
Lot:
Tingari Cycle

Born around 1943 at Tjiturrunya, Ronnie Tjampitjinpa grew up as a member of the Pintupi tribe approximately one hundred kilometres west of the Kintore Ranges across the Western Australian border. Spending most of his early years with his family travelling throughout the remote and vast desert of his birthplace, his way of life remained nomadic, reflecting the lifestyle and traditions of his ancestors which had existed for over forty thousand years. As well as roaming throughout the Pintupi territory, he later travelled across to areas in the Northern Territory including the Lake Mackay region. After his initiation into Aboriginal Law in the early 1950s and working for a period as a labourer, he joined his relatives in Papunya and it was here, many years later in 1974, that he began to paint.

Ronnie’s paintings convey a direct relationship to the people and land of the Tjampitjinpa Dreamtime: ‘These images while true to heritage, to the Dreaming, also navigate artist and viewer through a labyrinth of secret/sacred knowledge and permitted public image, embodying a raw energy descriptive of culture and country, while fulfilling the transcendent possibilities of great art.’1 The cultural, social and ceremonial structures of the traditional Pintupi tribe, known to still be in existence during the 1960s, were based on nomadic travel over vast distances and large areas of land - these very structures are the basis of Ronnie’s work. His paintings are produced in the most pure and traditional Pintupi style, in their use of strong but simplistic lines and sharp geometric turns which often connect to circles. Amongst the portrayal of other significant traditional themes, much of his work is representative of the spiritual Tingari legends.

Tingari Cycle is an exploration on canvas relating to the ancient legend of the Tingari creation whereby a group of ancestral elders ‘embarked upon periodic epic journeys through vast tracts of the Gibson and Western Deserts. As they travelled, they performed sacred and mystical rituals which opened up new land. The adventures of these Tingari groups are enshrined in numerous song and painting cycles which still inform Pintupi people today.’2 This work embodies the traditions of the Pintupi style in its minimalist and repetitive design and form, where Ronnie’s brushstrokes are confident and articulate, defining multiple networks of circles linked together by straight and curved lines. These motifs communicate the stories of the Tingari people on their nomadic journeys across the land, enriched by tones of ochre and blue. The mapping of the group’s extensive travels is defined in the line structure of the painting, linking networks of concentric circles which indicate the numerous sites where spiritual and sacred rituals were performed - the intimate details of which remain today the undisclosed knowledge of elders in Western Desert society.

Witnessing the conception of the Western Desert Art Movements during the early 1970s, Ronnie Tjampitjinpa today is among the most sought after of the contemporary Western Desert artists. The first of his many achievements was in 1988 when he won the Alice Springs Art Prize. In 2000, his work featured in the major exhibition, Papunya Tula: Genesis and Genius, held at the Art Gallery of New South Wales as a part of the Olympic Arts Festival. Following this, Australian Art Collector magazine included Ronnie in its selection of Australia’s 50 Most Collectable Artists in Issue 15, January – March, 2001. His work is held in the collections of the National Gallery of Australia, Canberra and most state galleries around the country, as well as in corporate and private collections in Australia, the United States, France and the Netherlands.