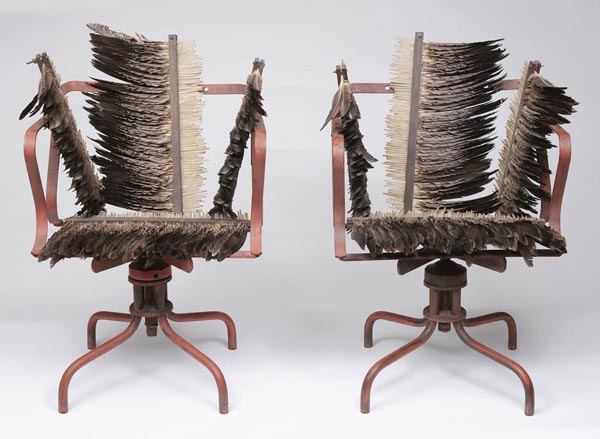 Despite their unusual appearance, this set of feathered chairs is not a departure from Rosalie Gascoigne's usual practice.  This work does not record, despite the reference to furniture in the title, a move to decorative arts - this feathered pair were never intended to function as seating - they are sculptures, conceived to fascinate the eye rather than conform to anyone's behind.

Gascoigne was intensely studied in art history and was apt to carry a notebook full of quotes and retrieve the appropriate wisdom from one of the masters to suit the occasion.  She would have been very familiar with Henri Matisse's adage of art being comfortable like an armchair:  'What I dream of, Matisse wrote, 'is an art of balance, of purity and serenity devoid of troubling or depressing subject matter - a soothing, calming influence on the mind, rather like a good armchair which provides relaxation from physical fatigue.’1 And equally Gascoigne knew that he wasn't suggesting art was meant to be easy.  She was always aware of the importance of engaging the viewer and using a recognisable feature - a chair, feathers, linoleum, enamelware or familiar object (and she used many) - would provide an accessible, comfortable way into an unfamiliar, potentially difficult, work of art.

Robert Rauschenberg's (1925-2008) work in the 1950s and 1960s would have been of great interest to Gascoigne, the mixed-media of his 'Combines' providing an exemplary use of a culture of varied materials.  His materials - paint, cardboard, old tyres, chairs, beds, printed pages - were sourced in New York and reflected the haphazard congregations of urban living. Gascoigne mirrored the suburban and rural mix that was the Bush Capital, Canberra in the Seventies, fossicking for materials weathered by the extreme local climes to reflect the experience of living with an awareness of cloudless light, sunburnt environment and time.

Gascoigne collected the feathers for the chairs on the shores of Lake George, located about 35 kilometres from Canberra, on the road to Sydney.

'And then I came to this place', she recalled in 1982, 'where there were all these…black birds, you know, cormorants. And a shattering of black beautiful glossy [feathers] as if the birds had just undressed.  ........ They’re beautiful feathers. They’re like the underside of mushrooms. You know...the quill.’2

The feathers were assembled in racks similar to those used in Gasgoigne's Feathered Fence 1979 (NGA Collection, Canberra) which used swan feathers also found at Lake George.  Racks of feathers were displayed on two reddish metal chairs that she had found at the dump.  Gascoigne aimed to create poetic, rather than literal interpretations of her work, aiming for a succinct 'plastic metaphor', where a melding of disparate objects and textures might produce unexpected allusions and tangential meanings.  Nonetheless, the claw foot of the chair suggests the foot of a bird and the splayed feathers conjure up the pose of a cormorant with its spread wings drying off in the sun.  Or did the sun-basking bird with its arm rest wings suggest a throne?  Gascoigne was not an artist to routinely create figurative works and it's just as likely that in this work she sought a tension between the earthbound weight of the metal and the airy, windborne feathers.  She had a longtime fascination with birds and the Feathered Chairs suggest an evocation of flight and freedom; a joyous ability to see and read the story of our ancient land.  Elated by exploration and discovery, Gascoigne willingly shares her delight with the armchair traveller.

1. "Notes d'un Peintre" in La Grande Revue, Henri Matisse (Paris, 25 December 1908); as translated by Jack Flam in Matisse on Art (1995)
2. From an interview between Ian North and Rosalie Gascoigne in 1982 made for the National Gallery of Australia and quoted in the forthcoming catalogue raisonné through the courtesy of Martin Gascoigne. Martin Gascoigne also notes that the feathers are likely to be those of the Australasian Darter, a bird known to nest on the lake.