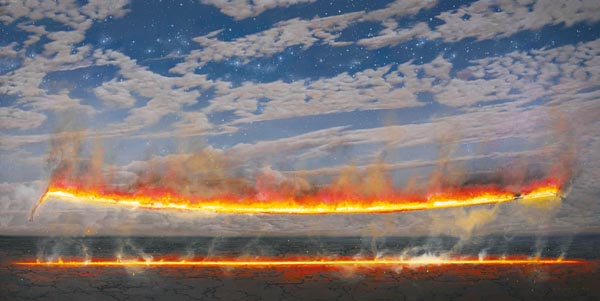 Tim Storrier’s burning rope paintings have become iconic imagery within this nation’s contemporary visual culture, with the artist’s recent Archibald success only adding to his standing as a powerful force within Australian art. Set against sparse landscapes, taken directly from Australia’s spectacular outback, Storrier presents a vision that is immediately recognisable and yet equally surreal.

Edmund Capon, a former director of the Art Gallery of New South Wales, remarks upon the inexplicably Australian sense which Tim Storrier’s paintings evoke, the strong sense of place which is contained within the vocabulary of his paintings, ‘they could not, I believe, have come from any country other than Australia’.1 The sense of space, low horizons and vast skies: few artists convey the sense of experience more poignantly than Storrier.

Storrier’s fire paintings had their genesis in the early eighties in the outback documentation of burning objects. Art Historian Catherine Lumby recalls this pivotal moment:

One evening in 1981, Storrier stuck a couple of steel posts into some arid, clayish earth and strung a rope between them. Then he went to the back of his ute, found a tin of lacquer, coated the rope and set it alight. He says he can’t remember why he decided to do it and has no idea where the concept came from. But the photograph documenting the onsite project, ‘Night Passage’, shows a motif which dominates some of his finest work to date: a blazing line of fire moving between two invisible points set against an opalescent sky.2

Starlight Blaze Line is an example of the beautifully composed and executed pictures which Storrier has become so well known for. The artist’s luminous clouds which stretch across the dusk sky cleverly emphasise the scale of the canvas and bring a tranquil atmosphere to the composition. The powerful heat of the glowing rope is reflected on the ground below, demonstrating the sheer strength of fire, one of nature’s most spectacular elements. Here, Storrier has created a visually spectacular picture that embodies his technical skills and affinity with the unique Australian landscape.

Originally a figurative painter, Storrier’s career has flourished in almost direct opposition to the predominant art movements of the 1970s, 1980s and 1990s. It is the artist’s strength of conviction which has seen his artistic career triumph and flourish — ‘he is one of the most secretive and enigmatic artists working in Australia today, a man of unpredictable intentions and directions, and one of the most original’.3 Few artists of the late twentieth century have explored the landscape in such detail as Storrier. Starlight Blaze Line reinforces his position as a highly accomplished painter of landscapes, not simply a landscape painter but an artist who uses nature as a stage on which to present scenes of human nature.