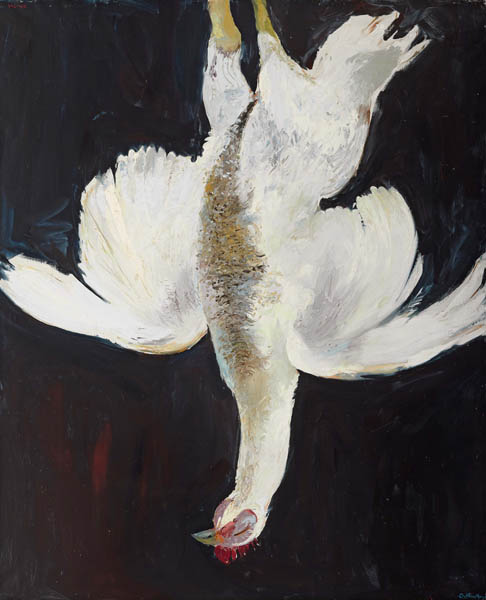 By in Blog
Lot:
Big Chook

After more than a decade of living amongst the bustle of London’s Hampstead, in 1970 Arthur Boyd rented a modest gamekeeper’s cottage near Ramsholt in Suffolk, allowing him peace and quiet, a studio and a place to reconnect with the landscape.  This duly revived his interest in the Australian landscape and may have been one of the factors in his decision to return to Australia a few years later. For the moment, however, the countryside afforded Boyd a place that allowed him to get on with his painting.

Rural life, he discovered, was not without its darker side. On walks in the district he came across dead rabbits, and acquaintance with the local gamekeeper brought Boyd into contact with all kinds of local wildlife and farm animals which could be used as material for his painting. Boyd drew on the symbolic aspects of these encounters, and they coincided with a renewal of his interest in his favourite Flemish and Dutch Old Masters, in particular the painters of still life.

The present painting belongs to this series which continued to interest Boyd for many years. At the same time that Boyd was producing paintings that were iconographically sophisticated, if not downright impenetrable, he was also using his powers of observation and highly evolved technical facility to produce works of natural simplicity and agricultural directness. The proximity to nature raised spiritual associations - Boyd’s acts of creation brought him closer to God.  Darleen Bungey, Boyd’s biographer, recounts how Boyd, presented with the body of a champion chicken by a local farmer, used the bird as the model for one of his grandest compositions, The Champion, which used the scale of the composition to invert the pecking order.1

Inversion raises the interesting issue of the double meaning of the present painting as well. Boyd signed the painting twice – on both the top and bottom edges - indicating that he wanted the painting to be considered for hanging upside down. Indeed, it is not entirely clear which way would be the correct orientation, but the purpose of the ambiguity is to demonstrate the proximity of the two states: the bird rampant and full of vitality, or hanging dead, waiting to be plucked and put in the pot.  The treatment is highly unusual, and yet underlines the receptiveness of Boyd to anything that might enrich the symbolic value of his work.