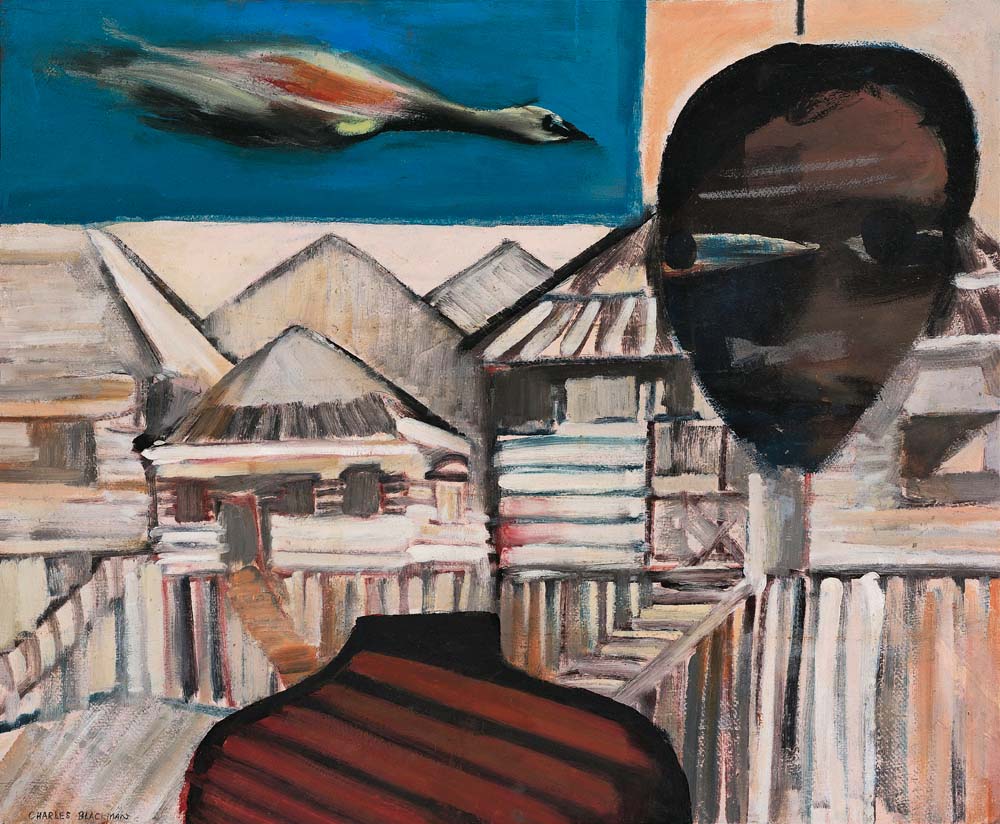 Charles Blackman first visited Queensland in 1948 at the age of twenty following a desire to break away from the familiarity of Sydney where he lived with his mother and siblings. He had left school at fifteen and worked at the Sydney Sun for two years – the artist yearned to travel and find new artistic opportunities. He roamed nomadically up the east coast until he reached Brisbane where he sensed the vibrancy of the diverse, young creative circle which was forming there. There was a post-war ebullience in the city’s warm air which Blackman found inspiring and he quickly formed friendships with young artists and writers such as Barrett Reid (1926-95) founder of the avant-garde magazine Baraj; the poet Judith Wright (1915-2000), gallerist George Johnstone and the artists of the Miya Studio including Laurence Hope (born 1927) and Laurie Collinson (1925-86). One particularly important friendship Blackman made in Brisbane was with a young woman named Barbara Patterson, a young Barjai writer, whom he married in 1951. The acquaintances he made during this time profoundly influenced his personal and professional development and would prove to be fundamental to the artistic network he formed later in his career.

Following their marriage, the Blackmans moved to Melbourne where they established a home and studio however, having Barbara’s family interstate ensured an ongoing connection to Brisbane. In 1952, the Blackmans returned to Brisbane for the winter and stayed with Barbara’s mother in Kelvin Grove. The artist painted a small group of oil and enamel works during this time which would become some of his most important early paintings and central to his artistic development. The present work, Queensland Town, with its simplified forms demonstrates the influence of Sidney Nolan’s (1917-92) work on Blackman - the young artist had seen the exhibition of Nolan’s Fraser Island works at Moreton Galleries in 1948. These early works demonstrate Blackman’s connection to the work of avant-garde artists and writers of 1940s/50s Brisbane and their modernist Sydney and Melbourne counterparts in the development of art and culture in post-war Australia.

Here, Blackman captures the unique silhouette of ‘Queenslander’ houses with a graphic quality that would become an element of the artist’s characteristic style. Another work belonging to this group, Self Portrait in Front of Boarding House, Spring Hill 1950 in the collection of the Queensland Art Gallery, captures the architectural style that is unique to Australia’s north. The pitched, corrugated roofs, weatherboard cladding and wraparound verandahs are simplified yet articulate a clear vision of the urban landscape.

In a letter to the owner of Queensland Town dated 8 August 1975, Blackman discusses the work:

I remember [the painting] well. It was painted at my mother-in law’s in Brisbane…the reality of the image is a different thing to the rationality of real experience. The head is autobiographical. Its positioning is integral to the whole image. The magic or achievement of holding power of the image is in the relationship of its elements, their juxtaposition of forms, their evocation in relation one to the other. That a horizon does not have a sky above it, or a head [without] a body below it, would be inexplicable in life, but is, in a painting, a statement of feeling or evocation. It is the creative power of the artist to make such images memorable, to make them speak something which is not sayable in words.’1

The importance of Blackman’s early Queensland paintings was confirmed in an exhibition, Lure of the Sun: Charles Blackman in Queensland at the Queensland Art Gallery in January 2016. The survey explored the friendships which he established with young artists and writers during his time in Brisbane and their importance in the formation of the long and successful career which Blackman has enjoyed. Many of these important formative works are part of the Queensland Art Gallery’s collection and are on display for the enjoyment of the public.