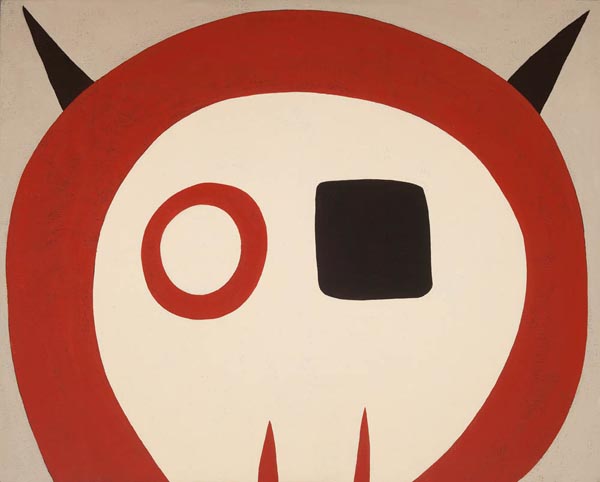 Black-Eyed Alien is part of the artist’s series of paintings Sun of Moonboy,1 a play upon Nolan’s much criticised work, Moonboy, from 1940. Nolan’s painting created much controversy at the time; it was seen as a transitional work and a departure from the abstraction which he had painted up until this time. The work was singled out by critics because of its minimalist style, a flat disc of yellow with an oblong protuberance at the bottom, set on a flat, dark background. Moonboy polarised artistic and critical opinion; Kenneth Wilkinson, from the Sydney Morning Herald commented that ‘any layman could produce pictures like this, without giving them the slightest thought’.2 Others called it a ‘lavatory seat’.3 The iconic image of Moonboy was later used as a backdrop at the Royal Opera House in London for their production of Igor Stravinsky’s Rite of Spring. The motif also appeared in the sets of Samson et Dalila in Covent Garden
in 1981.

Kelly, another Australian of Irish descent, has for many years been involved in finding comedic value in chapters of Australian history. He literally takes apart and re-examines the mythology surrounding iconic Australian characters and myths. Here, Kelly reinterprets Nolan’s famous work - Moonboy becomes Black-Eyed Alien, a play upon the theme of alienation, with references to this seen in the oversized heads and ogling, blank eyes.
The artist has changed the colour palette and incorporated the circular sun icon from previous bodies of work, including the Australia Council logo. Kelly’s deconstructs the logo in his own work, protesting the state-sanctioned ‘branding’ of art by the Australia Council and their strict regulations regarding its use. Kelly’s irreverent Ozco-themed designs can be seen on labels and cans of the iconic Tasmanian Moo Brew.

John Kelly’s paintings and sculptures are wry interpretations of contemporary culture. His artworks contain irony, displacement and absurdity to expose and debunk conceit and bureaucratic bungling. Kelly has enjoyed a highly successful career with sell-out shows in commercial galleries both locally and internationally. He has also been embraced by collectors on the secondary market, with more than ten works selling at auction in excess of $100,000.

John Kelly was born in Bristol, England in 1965, the same year his family relocated to Australia. In 1985, Kelly undertook a Bachelor of Art (Visual Art) degree at RMIT in Melbourne. Kelly later began a Masters of Art at RMIT and graduated in 1995. In 1996, he moved back to the United Kingdom and spent the following two years studying at the Slade School of Art in London. Since this time, Kelly’s work has been included in many major group and solo exhibitions both in Australia and overseas. David Walsh, owner and founder of MONA owns six paintings, one of which is on permanent display in the Hobart museum. John Kelly lives and works in Europe.