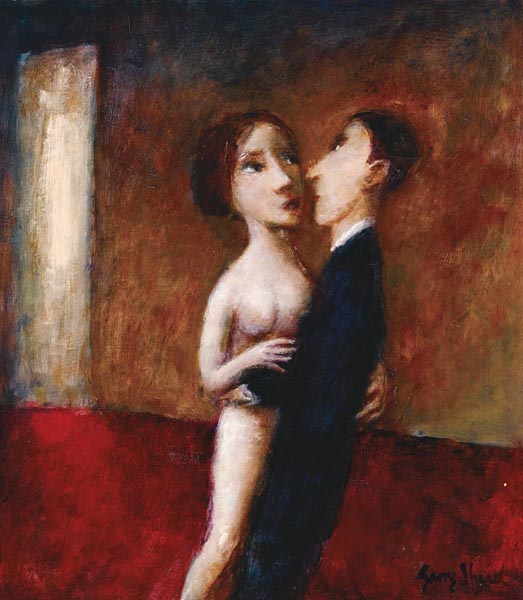 Garry Shead is one of Australia’s most renowned artists for his poetic depictions of Australian culture and the essence of human love.  Arguably amongst his most powerful series, Dance Sequence, is one of the artist’s most adored series and that includes the present work, Intimate Couple 2000. The Dance Sequence series are a platform in which Shead explores his personal impressions of life, self and the eternal dance of love; they also illustrate the artist’s admiration of the Old Masters.

The artist began the Dance Sequence in the mid-nineties and revisited this theme numerous times since then.  The series exemplifies Shead’s struggles with identity as artist and man and was the precursor to his Artist and Muse series.  Within the Dance Sequence series, Garry Shead projects himself into each painting, assuming the identity of the protagonist and participating as in a dream - emotionally present yet physically removed. In addition to what can be read into the literal interpretation of the subject matter, the artist’s presence is profound.  Shead has reflected that ‘…a work of art must have its origin in the life of the artist himself.  To express the great emotions is the purpose of a work of art’.1

One wonders, is this mystical Muse really there? Or does she exist only as a symbolic manifestation of our protagonist’s inner thoughts;  like an echo of the darker, ambiguous, sensual and ever-longing element of lust that lingers in the dormant soul of The Dancer, and of course, Shead himself.

An element that transcends the artistic visual plane of this painting is the poetic lyricism of the multifaceted subject matter that emanates from the concealed energy in the artist’s subjects and imagery.  Shead’s biographer Dr Sasha Grishin recounts - ‘Increasingly, these intimate interior settings allude to an ambiguous and seductive dream-like reality, where ideas and interpretations float free from gravity and verbal associations.’3

Shead has acutely observed the traditions and methods of the old masters throughout his entire artistic career. Rembrandt (1606-1669), Goya (1746-1848) and Velazquez (1599-1660) were all keenly studied in Shead’s visual diaries and the Dance Sequence  is perhaps the most indicative of the artist’s affection for the rich, vibrant palette employed by the European giants of painting.  A harmonious combination is created in this work between the romantic art of the past and the timelessness of love and desire.

As well as being one of Australia’s most celebrated artists, Garry Shead has received significant attention abroad since the mid-1960s.  His paintings are held in the National Gallery of Australia, all Australian state galleries, significant regional galleries and important private and public collections, both nationally and internationally.