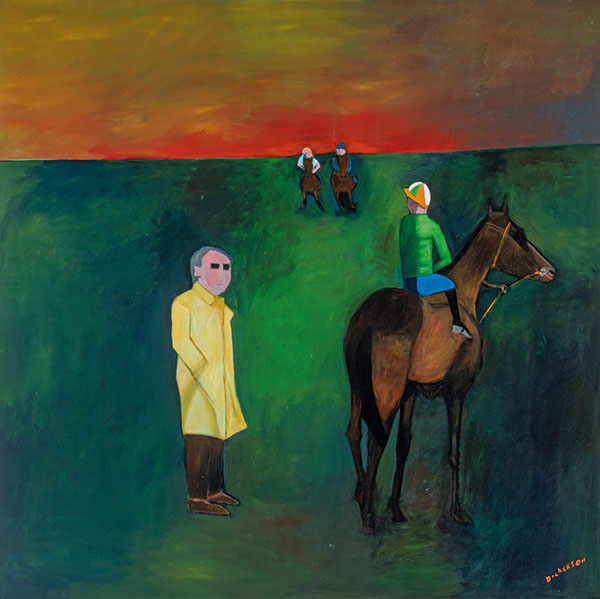 Alongside art, Robert Dickerson’s enduring passion was undoubtedly horse racing. The two go hand in hand throughout his oeuvre, with horses, jockeys and punters among his most sought after subjects. Remarkably, his career as a full-time artist owes its inception to a wager on a horse: in 1957 he won an Australian Women’s Weekly competition to decorate a Kelvinator fridge and used the £100 prize money to place a bet on a horse race. With the winnings, he was able to purchase decent art supplies and become a fully-fledged artist.1

Dickerson’s early life was one of hardship. Born in Depression-era Sydney, his mother charged him board from age thirteen, causing him to leave school the following year to work in a hinge factory in Annandale. At sixteen he turned to amateur boxing to make a living, recalling those days as desperate and painful.2 Around this time he developed an abiding interest in punting, using the surplus from his boxing winnings to bet on the races at Warwick Farm and Randwick, where the present work is set. During the World War II, Dickerson served in the Royal Australian Air Force in Darwin and South East Asia, making drawings in his downtime as he had done as a child, of warships and aircraft.

Early Morning, Randwick is an emblematic example of Dickerson’s favourite subject matter. Painted in 1994 when the artist was seventy years of age, it is an ode to the countless early mornings he would have spent at the racetrack, watching trainers and jockeys discuss the day’s races, and scrutinising horses in the mounting yard before placing his bets. The red sun rises over the track’s green grass, with the colours juxtaposing to create a pleasing balance in composition. Rather typically of Dickerson, the figures seem to float in the green pigment surrounding them, with the horizon being the only point of context to anchor the landscape.

Later in life, Dickerson left Sydney suburbia behind, moving to a property in Nowra, New South Wales, with his wife and business manager, Jennifer Dickerson. Here he bred racehorses at his training facility and continued to paint full time in his studio. His passion for breeding and racing horses was recognised when he was appointed artist-in-residence at Moonee Valley Racing Club for the 2001–2002 season. In 2013 he was awarded an Order of Australia for ‘distinguished service to the visual arts as a figurative painter’ and for his support of a range of charities.3 Dickerson continued to paint until his death of cancer in 2015, with Brisbane gallerist, Philip Bacon, holding the final exhibition of the artist’s life in 2014, stating that, ‘there would not be a private collection in Australia that does not have a Dickerson.’4