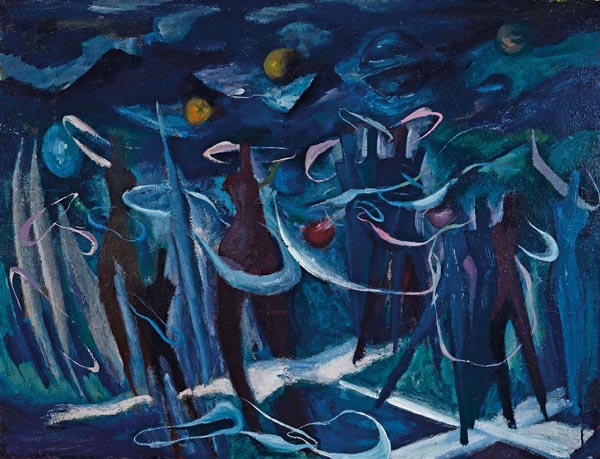 By in Blog
Lot:
Modern World

Modern World by Roger Kemp encapsulates a watershed moment in Australia’s history. Conveying the excitement then overtaking the contemporary world, this remarkable painting speaks of that heady time when, having emerged from years of armed conflict, the nation was poised to surge ahead industrially, scientifically, socially, and creatively.

Composed like a futuristic drama upon a summary stage, Modern World portrays scientists, engineers and philosophers shaping a brave new world in the aftermath of war. Kemp does this by gathering shadowy blue and red people within a setting that suggests a laboratory crossed with a control room.  Around these abbreviated figures are enigmatic streamlined devices, ribbons of pulsing energy and hovering coloured spheres, imagery apparently adapted from physics textbooks and intended to denote advanced technology.  Further back still the viewer makes out a darkened land, which has been blasted bare by war, and is now ready to be remade into something better.  With the simplest of means this optimistic painting conveys so much about an imminent transformation then facing the modern world.

Roger Kemp is nowadays revered as one of Australia’s foremost artistic innovators of the mid-twentieth century. A leader of the abstract movement (close followers included Leonard French and George Johnson), the 1950s and 60s saw him win numerous competitions (he twice won the prestigious Blake Prize), being nationally lionised by critics and curators, as well as having his work eagerly collected by state and regional galleries.

This recognition was yet to occur when he painted Modern World.  Remarkably, in the 1930s Kemp had completed a rigorous academic training, steeped in meticulously rendered nudes, classical art and pastoral landscapes, at the NGV’s art school.  However, he came to believe traditionalism was not capable of expressing the aspirations and anxieties of the current age, so he daringly looked to modern European art for direction.  Kemp chose to paint with a blunt simplicity, deliberately using enamels in pungent colours instead of the slick brushwork and supple tonalities learnt in art school.  Behind this stylistic decision was his wish to make uncompromising compositions where schematic figures signified the plight of the human spirit in turbulent times.

Modern World shows the artist embarking on this creative path.  He had already settled upon what would be his characteristic palette of shadowy ultramarine blues and moody blacks, with subsidiary forms in ruby reds, pink, white and gold.  Yet there are implicit echoes of 1940s British surrealism about this striking scene, especially to the science fiction-style imagery of John Tunnard (1900-1971), a major artist included in an exhibition of new British art which had recently toured state galleries.

Then again, Modern World shows Kemp also carefully pressing against the troubled expressionism of the Angry Penguins, which held much sway over modern painting locally.  If the artist had been friendly with Arthur Boyd (1920-1999) and Sidney Nolan (1917-1992) since art school, he felt the broader group was dominated by the Contemporary Art Society’s president, John Reed (1901-1981), who favoured anguished pictures trading in raw emotions and human pain.

But, as Modern World shows, Roger Kemp believed modern art should offer a message of hope with the coming of peace.  Indeed, in his own work he aspired to articulate visually that confident, philanthropic ethos of international reconstruction.  The message of Modern World is stirringly direct: war is over, evil has been conquered, and a new transformative age of enlightenment and human progress now begins.

A striking painting from the front rank of post-war modernism, Modern World comes from the same series as three pieces in the retrospective of Roger Kemp’s oeuvre currently at the National Gallery of Victoria.1