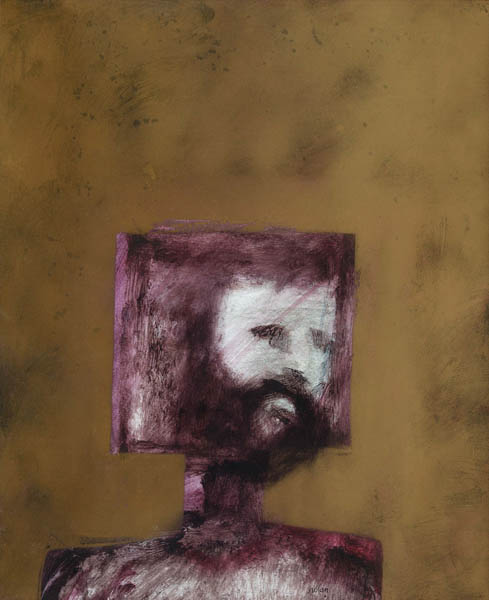 Sidney Nolan is Australia’s greatest modernist painter and remains one of our most universally recognised artists. During his lifetime he developed an enduring reputation both in Australia and abroad with a proliferation of exhibitions in major cities across the globe. Most notable is of course his iconography based on the life and death of Australian bushranger and outlaw Ned Kelly, which dominated his artistic practice throughout his life, and which we see an example of here. His persistence with the Kelly motif has been compared to Paul Cézanne’s (1839-1906) endless studies of Mont Sainte-Victoire or Claude Monet (1840-1926) and his waterlilies. Though, as art historian Tom Rosenthal points out, it is unlikely that any artist pursued one subject so avidly and so fruitfully for nearly half a century as Nolan did with Kelly, calling it his ‘magnificent obsession’.1 Indeed, the minimalist black square of Kelly’s helmet silhouetted against the landscape, as in the present work, has pervaded our collective cognisance of the Kelly legend, eclipsing the reality in the history books.

Nolan’s practice was not to explore one idea thoroughly, then move on to the next, never to return. Rather, it seems that for Nolan Ned Kelly continued to provide new permutations of content and design at different stages throughout his life. As Nolan changed, so did his Kelly. His first and most celebrated Ned Kelly series were the twenty-seven iconic works painted in 1946-47 at the Heide homestead of John and Sunday Reed, twenty-six of which Sunday Reed donated to the National Gallery of Australia in 1977. However, a key work from this original series remained in private hands and was dubbed ‘the missing Nolan’. In 2010 this missing Nolan, or First-Class Marksman (1946) as it is formerly titled, was sold by Menzies at auction to the Art Gallery of New South Wales for $5.4 million (including buyer’s premium), a result which remains the Australian auction record.

Nolan’s second Kelly series occurred when he moved to London in 1954 and having lost possession of the first series set about repainting them from 1954-56. The present work however, belongs to Nolan’s third and most personal Kelly series, completed during his extended sojourn back to Australia in 1964. Both these second and third iterations of the Kelly series extend the motif’s scope in new and unexpected ways. For example, here in Kelly (1964) we see the familiar abstracted Kelly with his iconic stylised helmet pushed up against the frontal picture frame in a very similar way to the original series of 1946-47. Yet this Kelly is conspicuously different in that he is a more ambiguous figure, his eyes are no longer round and cartoonish like in First-Class Marksman (1946), but are vague, with the downward movement of their brushstrokes evoking a new sadness not seen in the original series.

This new sadness is common in the third series, throughout which Nolan explores a more introspective and psychological conception of the Kelly project. This quest for new and more personal dimensions to the Kelly narrative is likely due to a sense of nostalgia brought on by his encroaching age, his father’s death at this time, or his trip back to the Wimmera in 1964 (where he had spent childhood holidays and two years of his military service in 1942-43).2 As Nolan explores these existential themes of time, loss and mortality his Kelly changes from a defiant youth to an aging crestfallen fugitive lost in the abyss of the immense Australian outback. As in the present work, this wispy, vulnerable Kelly is surrounded by the latent oblivion of the Australian terrain, the monotonous umber tones of the Wimmera plains engulfing him entirely. In this way, Nolan, with unequivocal mastery, turns an infamous chapter of Australian history into an elegiac reflection on his own life.