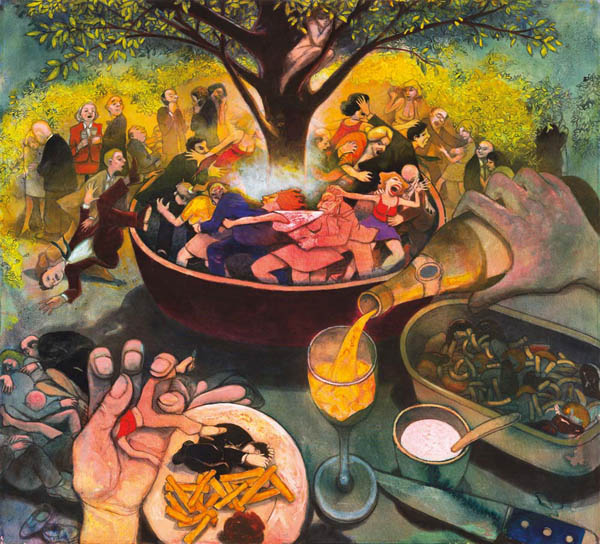 The later works of Fred Cress provide a fascinating line of commentary and satire on the theme of man as a social animal. They show in all their richness and perversity an unfolding narrative of the interactions of men and women engaged in the game of life. The artist is both an observer and a participant, one who can stand back and watch the antics of his fellow men, but in a context where he is often personally involved and a clearly recognised character in the story. It is not unsurprising perhaps that Cress would produce so many images of a dysfunctional society, as he had experienced the rich complexities of many cultures from his earliest childhood.

Born in the Indian army town of Poona just before the outbreak of World War Two, Cress grew up in the hothouse environment of the colonial Raj in all its perversity and inequality. He was educated in an isolated private school in the foothills of the Himalayas, a place that would either make or break him as a person. It was a frightening experience for a small and sickly child, and with considerable relief the family set sail for England with the coming of Indian independence. It was a migration to a mythical ‘home’ where he was again a stranger who had to fight for acceptance in an alien society. He endured another class-based education, long on punishment and short on creativity, but he survived and attended the Birmingham School of Art, a place of traditional values and sound technical training.

A talented musician and promising artist, Cress migrated to Australia in 1962, another experience as a stranger in an unfamiliar land. He was posted to Wangaratta before being promoted to Caulfield Technical College in 1964. Cress quickly gained a reputation as a powerful and creative painter, especially when he adopted a purely abstract mode of working. Throughout the early seventies he dominated contemporary painting in Melbourne, before moving to Sydney in 1975. After a crisis of confidence in the early 1980s Cress returned to the figurative painting of his art school training, creating portraits and figure compositions of power and complexity. His portrait of fellow painter John Beard (born 1943) won both the Archibald Prize and the People’s Choice in 1988, a sure sign that his art was speaking not just to the initiated, but also to a wider audience.

Starting with dynamic figure groups arranged in conventional social settings – the dinner party, the picnic, the lover’s tryst, he soon developed a surreal overlay in which the participants became elements within a bunch of flowers, in the pattern on a vase or some medieval tableau upon a bare stage. The compositions were big and bold, colourful and noisy in their explorations of human frailty. Man and beast coexist in outlandish groupings, with lust and longing being a frequent source of their frantic interactions. The figures are always convincing in their expression and disposition, but often engaged in baffling confrontations that leave a sense of unease and little understanding. Cress used filmic and photographic conventions to capture moments in time – a spilled glass of wine in mid-flight, the crashing of crockery and the chaos of a dinner party fast going wrong.

In Business Hours the scene is viewed from the artist’s viewpoint, a bottle of wine in his right hand while the left clutches a tiny figure, an escapee from the bowls on the table where his friends thrash about in the salads. Time, scale and space are distorted, a classic surrealist view of a Lilliputian world. The artist toys with his tiny captives, not viciously, but with a detached and scientific eye, a scientist perhaps, making observations on the bizarre habits of an alien world.