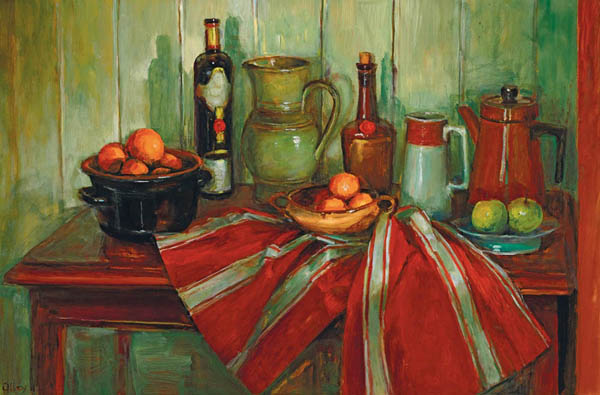 Margaret Olley is one of Australia’s most well-renowned painters of the still life subject. Her legacy to Australian art history is significant and her characteristic interior scenes are highly regarded and collected worldwide. Throughout her long and successful career, the still life was the focus of her artistic production, eschewing the trends which were engaging her contemporaries in favour of the thoughtful, harmonious domestic scenes which became her unique oeuvre.

Olley was born on the mid-North coast of New South Wales and spent much of her childhood in Queensland, later attending Brisbane Central Technical College to follow her interest in art. In 1943, Olley moved to Sydney to attend East Sydney Technical College and it was here she forged strong friendships with Donald Friend (1915-1989), Justin O’Brien (1917-1996) and David Strachan (1919-1970) that would have a significant influence on her oeuvre.

Kitchen Table exemplifies the manner in which Olley was able  to make ordinary, everyday objects appear to be  items  of  great beauty – the artist’s skill enabled  her  to  group objects of different colours, shapes and textures so that they came together in a perfectly balanced, harmonious compositions. ‘Still life and interiors gave her the freedom she desired. There was no looming storm forcing her to finish a landscape and no anxious model waiting for her to finish a portrait.’1

During the early 1970s, Olley would use her friend and fellow artist, David Strachan’s house as a studio after he tragically died in a car accident. The present work is painted in Strachan’s kitchen and relates to the work David Strachan’s Kitchen 1975 which is in the collection of the Tweed Regional Art Gallery. Here, Olley has captured the afternoon light which casts shadows behind the curved bottles and imbues the composition with a soft glow. The kitchen with its timber furniture, brightly glazed bowls, soft fruit and striped tea-towel was a well-loved and personal space which was also a reflection of the late artist himself. As Olley herself states, ‘an interior is like painting a portrait, so in that sense, the paintings are a portrait of David… an interior will result in a portrait of the person that lives there.’2