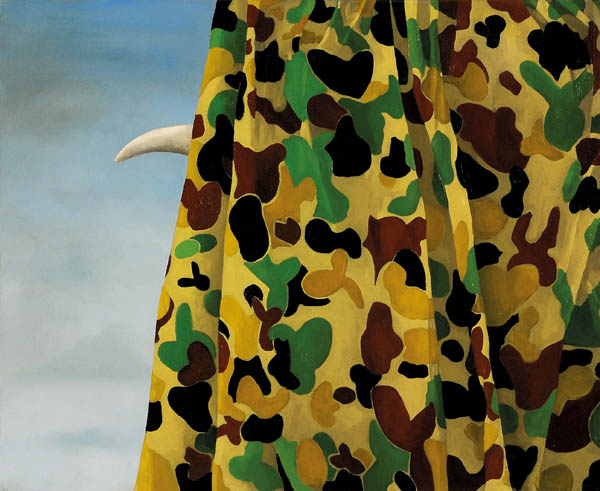 Dominating the vast majority of his oeuvre, John Kelly’s cow paintings and sculptures were originally inspired by William Dobell’s (1899-1970) creation of papier-mâché cows during World War II, deployed as camouflage around defence bases as a strategy to deceive enemy aircraft.

‘When World War II broke out, Bill [Dobell] served first as a camouflage labourer, later as an artist recording the work of the Civil Construction Corp, which built airfields and other defence projects. As a camouflagist, he was one of a group of several later famous artists who had been ordered to make papier-mâché cows and move them around the base in the hope of fooling the Japanese pilots. (said Bill, ‘I think the authorities underestimated the eyesight of Japanese airmen.’)’.1

The artist has, over the years, undertaken a sustained exploration of the theme, referencing the episode as a source of inspiration for his distinctive and sought-after artworks.

This scenario has been the inspiration for my work for a number of years….my intention is to create work that encapsulates the concepts and ideas that intrigue me. I take historical subjects such as Dobell’s cows…and my own personal experience to build a framework within which I can create my own vision of things. Within this I pursue a multi-layered research of concepts and ideas both visual and intellectual. Sometimes I use imagery that portrays a dumbness to camouflage a more sophisticated intent.  Through this I generate visual ideas and concepts in paintings and sculptures that create their own history by engaging in the real world as works of art. I like to create works that reach beyond their absurdity to reflect something of my visual and intellectual environment. This is my intent.2

Over time, Kelly’s in-depth exploration of the theme has gradually taken on qualities that are characteristic of the artist. “Dobell’s Cows” have clearly become “Kelly’s Cows” – the artist turns the wartime narrative on its head with his humorous treatment of the theme. Kelly uses wit and irony in his compositions to overcome any sense of tragedy that is usually associated with warfare. Kelly first started painting his Cow pictures in the early 1990s and their popularity with collectors has endured for more than two decades. Kelly demonstrates his artistic ability through the various media he employs to translate the narrative into playful interpretations of the theme. One of Australia’s foremost contemporary artists, John Kelly’s oeuvre continues to amuse and delight collectors of his work both in Australia and overseas.