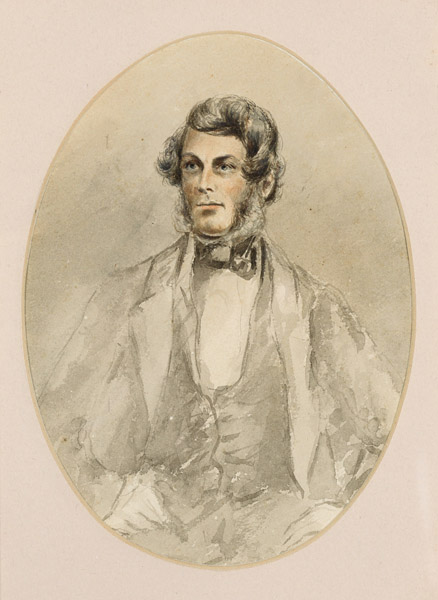 Thomas Tyrwhitt Balcombe (1810-61) was a well-known colonial identity, field surveyor and professional artist. The recipient of numerous awards and medals, Balcombe was also regarded as a man of sensitivity and wide-ranging interests. As one friend and colleague aptly put it, Balcombe was an ‘artist of considerable repute’ … [and] ... ‘a gentleman in the most refined sense of the word.’1

Up until the 2010s a mere handful of Thomas Balcombe’s work had been presented in public. Known examples were either tightly held or eagerly snapped up by national repositories, notably the National Library of Australia and the State Library of New South Wales. The reputation of Balcombe has been greatly enhanced by the growing revival of interest in and reassessment of the importance of Australian colonial artists.

The works in the current auction comprise of intimate portraits of family and friends, topographical landscapes, engaging portrayals of Aboriginal people and life, popular pastimes and scenes on the New South Wales goldfields. The cache represents the largest body of his work to come into public view and builds upon Menzies’ highly successful presentation and sale of seven works by Balcombe in December 2015. Collectively, these 100 finely rendered pen and ink, pencil and wash drawings and watercolours represent a rare and substantial offering by an accomplished Australian colonial artist and provide new perspectives on important aspects of mid-nineteenth century Australian art and life.

Portraits of family and friends

Thomas Balcombe’s early career developed under explorer Thomas Mitchell and the New South Wales Surveyor-General’s Department. He grew into the role and it equipped him for a professional life as an artist. Introduced to a wide range of people and places, both in Sydney and regional New South Wales, Balcombe quickly developed the skills to convincingly depict a variety of subjects including landscapes, people, rural scenes, stock and native animals.

Thomas Balcombe’s portraits and informal figure studies can be considered in this mould. Of these, lot 56 is a stand out. Based on contemporary photographs and family knowledge, it can be confidently ascribed as a self-portrait and dated in the mid-1850s. The artist is shown in his prime, with an upright posture, fine facial features, a sweeping quiff of hair and a signature mutton chop beard.

The sensitivity in which the self-portrait has been rendered parallels that of other family portraits, including those of his wife Lydia Stuckey and their beloved eldest daughter, Jane, who sadly died aged 18. Seated Lady (xiv) and Anatomical Studies (xv), both undated pencil drawings which feature in Balcombe’s extraordinary sketchbook (lot 65), show an uncanny resemblance to mother and daughter. The characteristic bob hairstyle is featured in an oil painting of Lydia on a horse from the same era. There is also a selection of tender portrayals of children and a baby captured asleep, in its most innocent state.

Alongside these familial sketches are numerous intriguing portraits of colonial identities, both men and women. Some of these can be identified, others, tantalisingly, await further research. A test etching of the well-known Sydney identity, Dr Thomas Revel Johnson, lies in the former category. Johnson (1817-1863) was a surgeon and journalist who published The Satirist and Sporting Chronicle (1843), Bell’s Life in Sydney and Sporting Reviewer (1845) and the Sunday Times (1849). Johnson and Balcombe were of similar age and shared common interests, notably horseracing and hunting.

Balcombe was singled out for his portraits and figure paintings, but he was equally adept at landscape and genre pictures of dogs, horses and kangaroo hunting. The Art Award, 25th July 1850 (lot 67), was awarded to Thomas Balcombe for the best landscape in oil, Grocotts Art Union for that year. The award of the medal, and others like it, confirmed his status as one of the colonies’ pre-eminent landscape artists and followed his public recognition as ‘a spirited painter of animals’.2

Coursing Kangaroos (lot 65, lx), Sketch of man, horse, dog and kangaroo in water bank (lot 63) and Death of a Kangaroo 1853 (lot 65, lix), depict a sequence of events that lead from the sighting, chase and eventual running down and death of a kangaroo. Kangaroo coursing, as it was called, was a popular pastime and clubs were formed by gentlemen for the purpose. The speed, agility and canniness of kangaroos trying to shake off the hunt were cause for admiration and stories were rife concerning how exhausted kangaroos would lure attacking dogs into pools of water and drown them.

Balcombe seems to have taken a special interest in horse portraiture with at least three known oil paintings attributed to him in the Mitchell Library collections. Horse and Rider (lot 65, lxiii) and Equine Study (lot 65, lxiv), both undated, reveal one horse that is domesticated and belongs to the racetrack while the other is untamed and free. In the latter, the horse rears and twists its elongated neck and fulsome body accentuating the sense of a highly spirited and noble character.

Thomas Balcombe’s prints, drawings and paintings of the pioneering men and women of the New South Wales goldfields are also important narratives. Collectively, these works register proto-nationalist overtones and a changing ethos of early colonial life. Mr E.H. Hargraves, the gold discoverer of Australia, Feb 12th 1851, returning the salute of the gold miners [5th] of the ensuing May was a painting (as well as a drawing and commercially sold lithograph) that Balcombe produced within six months of gold having been discovered and proclaimed. This was a momentous time for New South Wales and Balcombe was well-placed to capitalise on the huge insurgence of locals and foreigners at places such as Bathurst and the Turon River.

Slasher Arriving, Digging for, and Finding Gold (lot 59) is a rare surviving illustrated story that formed the basis of Gold Pen and Pencil Sketches. This book was produced by G. F. Pickering and Thomas, published in 1851. Australia’s most eminent art historian, Bernard Smith, perceptively noted in 1945 that the book’s dedication showed a national consciousness steadily growing in Australia.3

Balcombe’s goldrush narratives celebrate mateship, the dignity of labour, good humour and economic growth. These values are hallmarks of the paintings and related works including the double-sided sketch of Man Panning for Gold, Study of Man Panning for Gold (lot 65, vii) and Study of Three Men in a Mine (lot 61). Just as in the 1851 painting of Mr E H Hargreaves – in which the central protagonist returns from the diggings, walking humbly in unison alongside his trusted ride – in the drawings, the benefits of hard work and camaraderie between a diversity of people is celebrated and championed.

Balcombe’s sketchbook folio also contains important depictions of Aboriginal men and women and the changes brought about through white settlement. This includes accomplished standalone works such as Gundaroo Natives 1853 (lot 57), as well as the many preparatory sketches for oil paintings held in major private and public collections.

Gundaroo Natives 1853, is one of the few works by Balcombe to be titled, signed and dated. These inscriptions give important clues to the subject of the work. From the settlement of the Yass Valley in the 1820s and establishment of the township of Gundaroo, about 16 kilometres north of Sutton, the local Aboriginals found themselves increasingly marginalised. Numbers of people declined dramatically due to introduced diseases, alcohol and resource depletion and this pattern only increased with the discovery of gold in the region in 1852. Balcombe registers the dramatic changes that had taken place and the ‘choices’ they faced. There is a marked contrast between a despondent looking family group sitting passively under a humpy, dressed in blanket hand-outs, with tribal men who continue to hunt and make use of natural resources, such as a figure extracting sheets of bark from a eucalypt tree.

Balcombe’s empathetic portraits of Aboriginal people continues in the intriguing, though undated, Portrait Study of a Male (lot 64) and Study for Aborigine Fishing by Torchlight c1853 (lot 58). Both drawings are studies for major oil paintings. The latter represents the stoic central figure modelled on classical Western poses depicted in two related oil paintings Aborigines Fishing by Torchlight and Untitled (Aboriginal Fishing) c1853. Portrait Study of a Male in turn depicts the proud and handsome face of an initiated warrior, seen in Aboriginal hunting c1850.

Based on the sketches, we can now confirm the authorship of these and other paintings as irrefutably in Balcombe’s hand, including the accomplished painting previously mentioned in the Mitchell Library collection, as well as his evocative image of an Aboriginal Man Spear Fishing in a Pool from the National Library of Australia. Conversely, the last known works by Balcombe, dated 1857, also help to date the corresponding sketches such as Study for Aborigines, Landscape and Figure Study and Study of Male Torso (lot 65, i, ii & iv).

Passed down over five generations, through the eldest daughters, these works can now be deservedly enjoyed by many. The emergence of these pieces contribute greatly to our knowledge of the man and constitute a formidable and enduring artistic legacy.