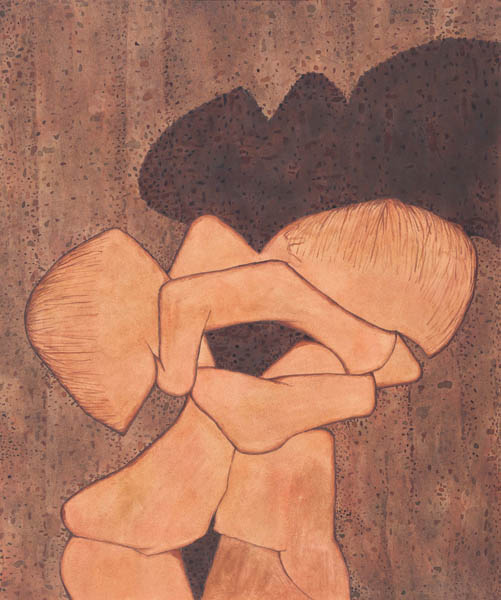 By Catherine Baxendale B Phil Hons in Blog
Lot:
The Conflict

As suggested by its title, The Conflict 1959-60 arose from a turbulent period in the history of modern Australian art.  In August 1959, John Brack participated in the now-legendary Antipodeans exhibition at the Victorian Artists’ Society, Melbourne, appearing alongside Arthur Boyd (1920-1999), John Perceval (1923-2000), Clifton Pugh (1924-1990), David Boyd (1924-2011), Robert Dickerson (1924-2015) and Charles Blackman (1928-2018).  This exhibition of avowedly figurative artists would come to represent the Australian dimension of one of the most important dichotomies of twentieth-century painting; that of abstraction and figuration.  The show was introduced with a pugnacious manifesto written by the art historian Bernard Smith, which decried ‘the luxurious pageantry and colour of non-figuration.’1  In a vehement rebuke to the rise of abstract expressionism and colour field painting in the United States, Smith wrote that ‘Painting for us is more than paint […] We are witnessing yet another attempt by [the] puritan and iconoclast to reduce the living speech of art to the silence of decoration.’2 By embracing a resolutely figurative art, the Antipodeans would act ‘in defence of the image’ and its ability to represent external realities beyond the painterly surface.3

No sooner had the exhibition opened than Brack began to experience a lingering sense of disquiet.  In particular, the dogmatic flavour of Smith’s manifesto seemed at odds with Brack’s own sober and dispassionate approach to his art.  Like several of his fellow artists, Brack’s motivations for joining the group were largely practical: it presented the opportunity to publicly exhibit his work, while enjoying the holistic advantages of shared overheads and potentially increased publicity.  As Sasha Grishin has observed, Brack’s public pronouncements prior to the exhibition ‘betrayed no strong bias towards either figurative or abstract painters; he saw good and bad painters working in both categories.’4  Fearing that the Australian art world had grown increasingly polarised, Brack resigned from his role as secretary of the Antipodeans, declaring, ‘this was not a team for me.’5

Somewhat ironically, The Conflict reveals an unprecedented willingness on Brack’s part to experiment with elements of abstraction.  Most likely created in the immediate aftermath of the Antipodeans exhibition, the painting is surely one of the artist’s most abstract works, such that its content is not immediately legible to the uninitiated.  The painting centres upon a pair of young male figures, their limbs contorted in the midst of struggle.  Rendered in a fleshy, monochromatic palette, the boys’ facial features are scarcely discernible beneath fine strands of hair.  Brack’s interest in abstraction is apparent in both the flat, graphic simplicity of the central forms and his emphasis upon painterly surface, as implied by the dappled tonal backdrop.

The Conflict forms part of a small series of works Brack created throughout 1959 on the subject of schoolchildren.  As the father of four daughters, Brack ‘was conscious of his children growing up and wished to document […] their childhood.’6  Despite this close personal attachment to his subjects, Brack deliberately sought to avoid sentimentality in his depictions of children.7 The present work is closely related to the major oil painting, The Fight 1959, now in the collection of the Museum and Art Gallery of the Northern Territory, Darwin.  In both works, Brack has chosen to focus not on the clichéd innocence of his young subjects but on the petty skirmishes of the schoolyard. The discordant drama of each scene is further underlined by the bold shadows cast behind the figures, which almost assume a life of their own.  In The Conflict, the framing of the composition feels uncomfortably close, as if to emphasise the blind spontaneity of the struggle - ‘the heat of the moment’.  Nevertheless, as Sasha Grishin notes in relation to The Fight, ‘the exaggerated bitterness of the conflict is momentary, it is a physical encounter and not a state of prolonged spiritual anguish.’8