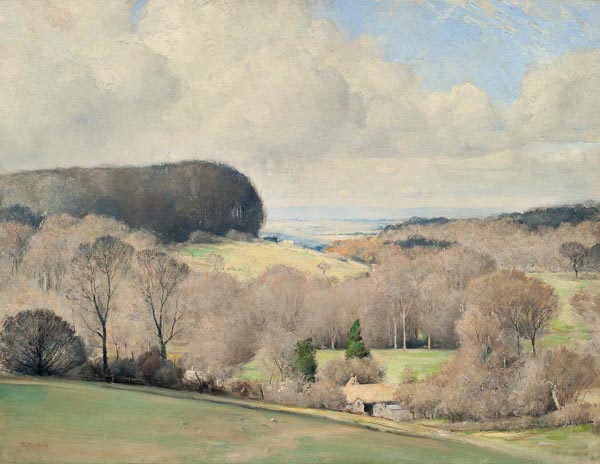 All very quiet here; a boy singing; a bell, a distant two horses, heads leaning over a gate; so up the lane by the newly-thatched cottage, and then along the village road; people just unrecognisable on the way to the little old church, and then to write a word to you; lamplight and a good fire.

A Kentish Landscape (Spring in Dorset)  is the largest and most impressive of a group of charming English landscapes that Tom Roberts painted in 1922 just prior to returning to Australia early in the following year.

Dorset was Roberts’s birthplace and he frequently returned there to paint, along with the counties Sussex, Devon and Kent. Attracted by the south-west’s congenial collection of farms, villages and estates and its picturesque, rolling hills, Roberts was also well aware of the region’s association with the poetry of nature and valorisation of English rural life, made famous in the 19th century novels of fellow Dorset man Thomas Hardy including Under the Greenwood Tree, 1872, and the critically acclaimed Far from the Madding Crowd, first published in 1874.

Following a brief period spent in Australia at the end of World War One, Roberts resolved to go back to England before making Australia his permanent home. The final years in England from 1919-22 were productive ones for Roberts. He attended to financial affairs including selling the family property at the Hampstead Garden suburb of Golders Green, saw his son Caleb through university and took time to travel to his favourite places to work. Foremost amongst these was Dorset where he produced some of his finest English landscapes.

Roberts is known to have visited Dorset in June 1921, returning again the following February with his wife Lillie (Elizabeth). They stayed at the village community of Lytchett Matravers. Although begun at the end of winter – recorded on a remnant of a label on the reverse stretcher is ‘Dorset Febry’ [sic] in the artist’s hand – as its title indicates A Kentish Landscape (Spring in Dorset) was completed slightly later between March and May. Though begun in the open air, the painting’s larger than usual size suggests that it was completed indoors at some later stage. The depiction of bare trees and the absence of snow also reinforce the suggestion of an early spring completion date.

Lytchett Matravers Dorset, 1922 depicts a smaller, compacted scene of A Kentish Landscape (Spring in Dorset), suggesting it is possibly a study for the larger work.2 Each painting features gently sloping fields, an amiable nest of cottages and the distinctive form of the woods to the rear. In the larger painting, Roberts shows his mastery with the brush, taking great care with naturalistic details such as the gathering of clouds and striking a graceful contrast between evergreen and deciduous trees. It is a painting of lyricism and poise in which the artist pays homage to the English countryside and its depictions by Thomas Hardy whose work ‘Return of the Native [he had only recently reread before] a bright fire’.3

A Kentish Landscape (Spring in Dorset) was brought back to Australia by Roberts and probably exhibited as Spring in Dorset (cat. no. 10) in a one-man show at the Fine Art Society, Melbourne, in 1924. Along with Sussex in Spring, 1921, these English paintings were singled out by the Argus art critic for their ‘delicate colour’ and charm. ‘Roberts’, he rightly claimed, had ‘done much fine work in helping to raise the standard of Australian art’.4 Significantly, this exhibition which focussed largely on the artist’s most recent work painted in the Dandenong Ranges, showcased tranquil, rural views rendered in pearly greys to create a sense of distance, violet for the twilight sky and subtle tones of green for the open fields, grass and trees. It was as if in his new home in South Sassafras (later known as Kallista) Roberts was carrying on the best of his English experience and re-inventing it in an Australian vein.