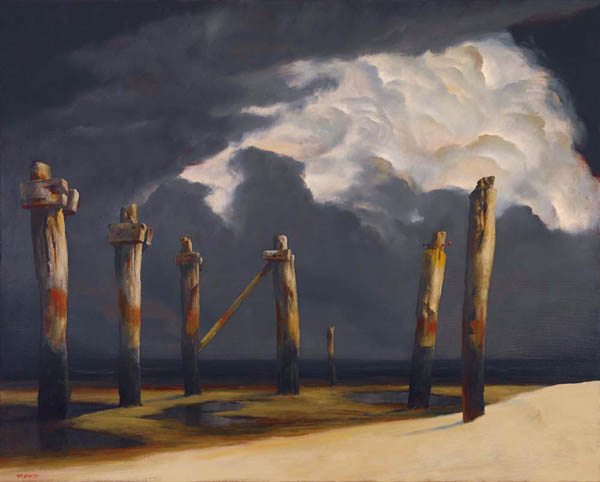 By Gavin Fry in Blog
Lot:
Remnant Pier with a Stormy Sky

The rise of Rick Amor to the prominent position he now enjoys in Australian art is well known and widely documented. There was perhaps an inevitability in his steady progress, for as an artist he is single minded, hardworking and unpretentious in his public persona. He continues to produce work of the highest standard, finding and refining a relatively modest set of motifs and subjects, which can be plotted over the past thirty years. After an early career working in the graphic arts and illustration, he found his mature voice in the 1980s and has excelled in every medium, from printmaking and painting to monumental sculpture. The mastery of technique and medium was a deliberate plan, driven by his belief that to be a professional artist worthy of the name one had to be proficient in the crafting of a work of art, regardless of its scale or form.

As a painter Amor has explored his surroundings and the places where he has lived, with the most recognisable being the eastern shores of Port Phillip Bay near his hometown of Frankston. While the surrounding shores are generally flat and unspectacular, he has drawn from the subject many works full of drama and visual richness. His views of the bay are not a sentimental return to the pleasures of childhood, but studies of stormy skies and windswept waters more reminiscent of the nineteenth century romantics or the seascapes of seventeenth century Dutch painting. They are certainly a world away from some of the most beloved images in Australian art, the sunlit studies of beach holidays produced by Arthur Streeton (1867-1943), Charles Conder (1868-1909) and Penleigh Boyd (1890-1923).

A common theme in nearly all of Amor’s landscape works is a man-made structure succumbing to the elements. This might be a huge factory, a bridge or an abandoned ship. No matter how large and well-engineered, such structures will decay and corrode quickly in the harsh environment of wind, salt and sea. He sees these as the follies of an over-reaching pride, man’s feeble attempts to create permanence in an unstable world. At other times the structures might be the simplest of things, a concrete bunker in the sand, the wooden piles of an old pier or bridge, long since collapsed. The piles of the Remnant Pier and Stormy Sky are all that remain of a once strong and useful structure, the place from where people and their boats once set off into the waters, looking for pleasure or profit.

The motif of the stranded columns of timber, bedded into the sand, has returned many times in Amor’s work. They first appeared in the 1980s with his dramatic series of drawings and etchings of the pier, a place of menace and dread where a lone figure runs to escape some unseen force. On a few occasions that menace was given explicit form as a shark or giant octopus, the subject of recurring nightmares. Later, the waters were calmed and the pier was home to a lone dog, waiting patiently for his next command. From a simple artistic viewpoint they make a strong vertical statement against the flat waters of the bay and the turbulent sky, a device essential to Amor’s carefully crafted composition. Every work he creates, be it a portrait, landscape or figure study, starts as a grid based on the Golden Mean. In the present work, the design has the abstract simplicity of Jackson Pollock’s (1912-1956) Blue Poles, but given a gravitas and elegance in the careful arrangement of each pile, their sizes carefully graded to build a composition of stability that defies the constant onslaught of the elements.