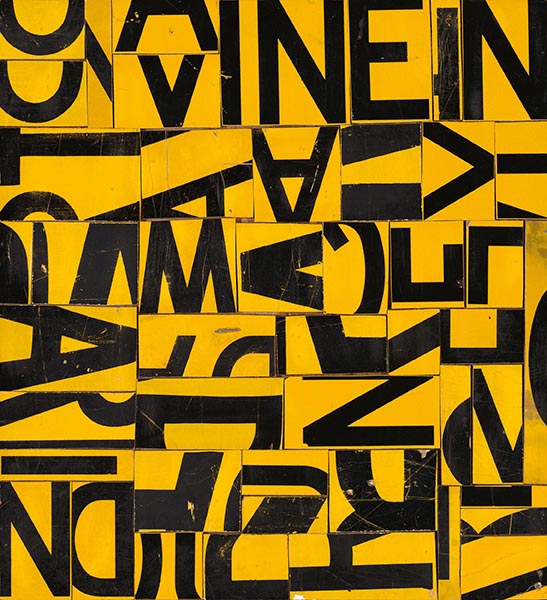 By in Blog
Lot:
Danegeld

Rosalie Gascoigne embarked on her career as an artist at the age of 57, and experienced an unprecedented and meteoric rise to the summit of Australian art. Gascoigne first exhibited at Macquarie Galleries, Canberra in 1974, however it was her inclusion in the Artist’s Choice exhibition at Gallery A, Sydney in 1975 that launched her career. After only three solo shows, Gascoigne was given a survey show by the National Gallery of Victoria (1978), and in 1982, she was chosen as the first woman artist to represent Australia at the Venice Biennale.

‘Gascoigne’s found materials are seemingly maverick, the booty of the fickle-eyed bowerbird. Yet these fragments were once part of larger patterns: of road signage and language; of manufacture and freight; of fencing, wallpaper and linoleum; of colour, [and] lettering.’1 Recycled road signs and yellow Schweppes crates are today regarded as archetypal materials within Gascoigne’s oeuvre, and have proven the most commercially successful.2 Gascoigne first began using reflector road signs in her assemblage works in 1985. The small township of Collector situated on the outskirts of Gascoigne’s hometown of Canberra had recently been bypassed inline with improvements to the Federal Highway, and road signs began to appear at this rural rubbish site. Gascoigne immediately recognised their potential. Since then, Gascoigne consistently employed this yellow and black metallic material in her work. From the first road sign assemblage, Highway Code 1985, right through to Loopholes 1996, Gascoigne pushed the boundaries and possibilities of this favourite material, exploiting its graphic qualities.

The interplay between texture and text is at the heart of this series of works, most explicitly communicated through the composition which is so reminiscent of a crossword puzzle.3

She also loved language, its poetic rhythms, and the shapes of letters themselves.4 The reflector road signs proved an ideal material for Gascoigne to project these dual purposes. The bold, black lettering is certainly reminiscent of the crossword puzzle format, and all Australians feel a sense of familiarity triggered by the yellow and black roadwork signage. Gascoigne was a self-proclaimed ‘lateral’ thinker. In her work, words and letters are deliberately fragmented to discourage an analytical interpretation.

Highway Code 1985 was the first road sign work that Gascoigne completed. Here Gascoigne’s preoccupation is sequences of letters, arranged vertically and horizontally in square sections. Because the material bears a history and familiarity, it is possible to pick out certain sections of words. For instance there is a predominance of ‘OW’s’, ‘S’s’ and ‘L’s’, clearly derived from ‘Drive Slowly’ road signs. At the opposite end of this spectrum is Loopholes 1996. Comprised of fragments of ‘O’s’ and ‘D’s, this work is an abstract pattern. Stylistically, Danegeld 1995 occupies a space in between the abovementioned works. Visually it is a far more equal division of black and yellow than the other works. Unlike Loopholes, which contains full yellow pieces, and a sparse arrangement of fragmented lettering, in Danegeld, the worn black letters occupy a large portion of each and every rectangular puzzle piece. Gascoigne combines fragments of letters, with full letters, capitalising on her viewer’s natural impulse to make sense of the letters. The need to find a message, to devise an analytical reading is what makes Danegeld so compelling. First one scrutinises the work, desperately seeking order and sequences within the arrangement, then gradually through this interaction, it is possible to dislocate oneself from the letters and meaning, and to enjoy the mesmerising shapes, patterns and textures that Gascoigne evokes so masterfully.

The artist’s hand is evident in Danegeld. The edges don’t meet exactly, and so there are crevices between the sections making the plywood mount partially visible in places. Furthermore Gascoigne makes no attempt to hide the inherent imperfections of the materials she uses. The scratches and stains bare the history of the object in its original guise, and this history has become such a central tenant of Gascoigne’s ideology. Gascoigne saw beauty in objects that the majority of the population would dismiss as ‘damaged’ or redundant, and transformed them into some of the most memorable images produced by a contemporary Australian artist.

Like iconic Australian landscape artists, Fred Williams (1927-82), Emily Kame Kngwarreye (c1910-1996), and John Olsen (born 1928), Rosalie Gascoigne challenged the way we see our country. ‘In an age when so much art seems manufactured, overtheorised, weary at heart, Gascoigne’s compulsive artistry, forged outside the art schools and academies, had an astonishing ability to invigorate one’s faith in the necessity of art.’5